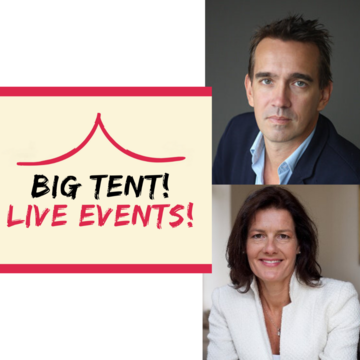 The World After COVID: In converstation with Professor Peter Frankopan (Stavros Niarchos Foundation Director of the Oxford Centre for Byzantine Research) and Professor Ngaire Woods (Dean of Blavatnik School of Government). Full event details to follow.

Peter works on the history of the Mediterranean, Russia, the Middle East, Persia, Central and Southern Asia, and on relations between Christianity and Islam. He is particularly interested in exchanges and connections between regions and peoples. Peter specialises in the history of the Byzantine Empire in the 11th Century, and in the history of Asia Minor, Russia and the Balkans. Peter works on medieval Greek literature and rhetoric, and on diplomatic and cultrual exchange between Constantinople and the islamic world, western Europe and the principalities of southern Russia.

Professor Ngaire Woods is the founding Dean of the Blavatnik School of Government and Professor of Global Economic Governance at Oxford University. Her research focuses on how to enhance the governance of organizations, the challenges of globalization, global development, and the role of international institutions and global economic governance. She founded the Global Economic Governance Programme at Oxford University, and co-founded (with Robert O. Keohane) the Oxford-Princeton Global Leaders Fellowship programme. She led the creation of the Blavatnik School of Government.

Ngaire Woods serves as a member of the Asian Infrastructure Investment Bank’s International Advisory Panel, and on the Boards of the Mo Ibrahim Foundation and the Stephen A. Schwarzman Education Foundation. She is an Independent Non-Executive Director at Rio Tinto (effective September 2020). She sits on the advisory boards of the Centre for Global Development, the African Leadership Institute, the School of Management and Public Policy at Tsinghua University, and the Nelson Mandela School of Public Policy at Cape Town University. She is Chair of the Harvard University Visiting Committee on International Engagement and sits on the Harvard Kennedy School Visiting Committee. She is a member of the UK Government National Leadership Centre's Expert Advisory Panel, and of the Department for International Trade’s Trade and Economy Panel. She is an honorary governor of the Ditchley Foundation.

Previously, she served as a Non-Executive Director on the Arup Global Group Board and on the Board of the Center for International Governance Innovation. From 2016-2018, she was Co-Chair of the World Economic Forum’s Global Future Council on Values, Technology and Governance.She has also served as a member of the IMF European Regional Advisory Group, and as an Advisor to the IMF Board, to the Government of Oman’s Vision 2040, to the African Development Bank, to the UNDP’s Human Development Report, and to the Commonwealth Heads of Government.

Ngaire Woods was appointed Commander of the Most Excellent Order of the British Empire (CBE) in the 2018 New Year's Honours for services to Higher Education and Public Policy. She is a Fellow of the Academy of Social Sciences and an International Honorary Member of the American Academy of Arts and Sciences.