Live Event: The 2020 Besterman Lecture: ‘Who were the French Revolutionaries?’ by Professor William Doyle 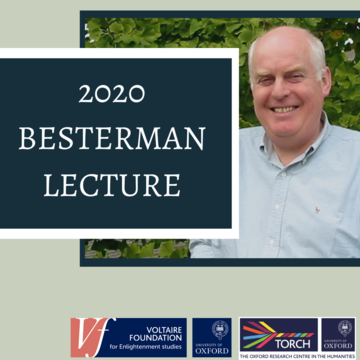 Part of the Humanities Cultural Programme, one of the founding stones for the future Stephen A. Schwarzman Centre for the Humanities.

In collaboration with the Voltaire Foundation, TORCH is delighted to support the Annual Besterman Lecture, 2020

Besterman Lecture 2020 'Who were the French Revolutionaries?' by Professor William Doyle

When Napoleon in 1799 declared that the French Revolution was over, he said that was because it was now established on the principles with which it began. The implication was that much of what had happened over the preceding decade of upheaval had not been in accordance with those principles. Napoleon took care, of course, not to state what they were: his constitution was the first since 1789 not to contain a declaration of basic rights. Yet everyone during the Revolution claimed to be acting on revolutionary principles, or denounced their opponents for betraying them. Can we distinguish between those who held to and those who ignored or compromised revolutionary aspirations? This lecture will make the attempt, challenging some of the most enduring assumptions in revolutionary historiography.

Professor William Doyle is Professor Emeritus of History and Senior Research Fellow, University of Bristol. Professor Doyle is a British historian, specialising in 18th-century France, and is most notable for his one-volume Oxford History of the French Revolution (1st edition, 1989; 2nd edition, 2002; 3rd edition, 2018). Professor Doyle one of the leading revisionist historians of the French Revolution, obtaining his doctorate from the University of Oxford with a thesis entitled The parlementaires of Bordeaux at the end of the eighteenth century, 1775-1790 - he is also the author of sixteen books on French and European history, five of which have been translated into Chinese. Professor Doyle is also a fellow of the British Academy and a co founder of The Society for the Study of French History.

Karen O'Brien, Head of Humanities Division, Oxford University. Before taking on this role in 2018, Professor O’Brien was Vice Principal (Education) and Professor of English Literature at King’s College, London.  At King’s she oversaw institutional strategy for all undergraduate and postgraduate students, the university Maths school, admissions and widening access, and the financing and implementation of student-facing capital projects.  She implemented major changes in the areas of online degrees and digital learning, new classroom and clinical teaching spaces, careers and co-curricular learning.  Prior to this, she was Pro-Vice Chancellor at Birmingham University and held academic posts at Warwick, Cardiff and Southampton Universities.  Originally educated at Oxford, she held a Harkness fellowship at the University of Pennsylvania and a research fellowship at Peterhouse, Cambridge where she is now an Honorary Fellow.  She is a trustee of the Rhodes Trust, a trustee of Chawton House, a member of Princeton University Press’s European advisory board and a Fellow of the Royal Society of Arts.

In addition to being Head of the Humanities Division, she is a professor in the Faculty of English at the University of Oxford. Her research focuses on the Enlightenment and eighteenth-century literature, particularly the historical writing and fiction of the period.

He is author, with Isser Woloch, of Eighteenth-Century Europe: Tradition and Progress (2nd edition; Norton, 2012), and author of Cultures in Conflict: The French Revolution (Greenwood, 2003); and A Field of Honor: Writers, Court Culture and Public Theater in French Literary Life from Racine to the Revolution (Columbia, 2002). Professor Brown will be delivering the ASECS-BSECS lecture at this winter's virtual BSECS  conference, on the intellectual origins of "eighteenth-century studies.

Professor Lauren Clay, Vanderbilt University. Lauren R. Clay is an historian of Old Regime and revolutionary France and its empire, with particular interests in urban cultural and civic life and the emergence of a commercially oriented society. Her book Stagestruck: The Business of Theater in Eighteenth-Century France and Its Colonies (Cornell University Press, 2013) examines the establishment of professional public theaters in cities throughout France and the French empire during the prerevolutionary era. Stagestruck was awarded Honorable Mention for the 2014 Barnard Hewitt Award for Outstanding Research in Theatre History by the American Society for Theatre Research and was named a finalist for the 2013 George Freedley Memorial Award, for exceptional scholarship examining live theatre or performance, awarded by the Theatre Library Association. Her article “Provincial Actors, the Comédie-Française, and the Business of Performing in Eighteenth-Century France,” in Eighteenth-Century Studies (2005) was the co-winner of the 2006-2007 James Clifford Prize, awarded by the American Society for Eighteenth-Century Studies.  She has a chapter on Voltaire’s fortunes at the box office forthcoming in Databases, Revenues, & Repertory: The French Stage Online, 1680-1793/Données, recettes et répertoire. La scène en ligne (XVIIe-XVIIIe siècles), Eds. Sylvaine Guyot and Jeffrey S. Ravel (MIT Press, 2020).

Lauren's work has also appeared in The Journal of Modern History, Slavery & Abolition, and The Oxford Handbook of the French Revolution.  Currently, she is writing about the debate over the legality of the slave trade during the early French Revolution. Lauren completed her PhD in history at the University of Pennsylvania.  Prior to joining Vanderbilt, she spent several years teaching at Texas A&M University. Her scholarship has been supported by grants and fellowships from the National Endowment for the Humanities, the Newberry Library, the American Society for Eighteenth-Century Studies, the Woodrow Wilson National Fellowship Foundation, and the Fulbright Program. She teaches courses on the history of early modern France, the economic history of the eighteenth century, revolutions in the modern world, European imperialism, and the history of Paris. She is a past Co-President of the Society for French Historical Studies.