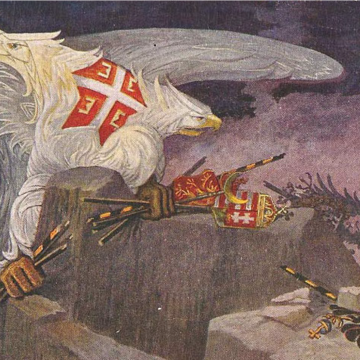 The lecture – based on a book manuscript under contract with CUP – explores the role Byzantium and its legacy have played since the Enlightenment in the historical self-narrations of Greece, Bulgaria, Serbia and Romania—countries once belonging to the Byzantine political and cultural orbit. It looks into the ways the “Byzantine factor” has been perceived, evaluated, interpreted and politically instrumentalized by the historiographies of the modern Balkan “successor states.” The gradual institutionalization of Byzantine studies and the directions these studies took in the individual countries provide the canvass against which the examinations of the various projections or appropriations of Byzantium in the national narratives and the assessments of its role and effects is undertaken.

The emergence of the modern Balkan nations and sovereign states in the nineteenth century from the ruins of the Ottoman empire – itself the heir and, in many respects, the continuation of the Eastern Roman empire – signaled the actual birth of Byzantium as a subject of these nations’ history. Its heritage has been variously appropriated or evaluated ever since, occasionally asserting, but more often subverting, the idea of a shared past. The role and impact of the Byzantine Empire became, and remained, a central theme in the national-historical narratives and identity politics for the countries of Southeastern Europe. While it is largely agreed today that the history and culture of the Byzantine Empire constitute an inherently multicultural field of research, in the countries occupying its historical area, Byzantine culture and legacy were the subject of (usually warring) national interpretations. They were implicated heavily in issues like ethnogenesis and collective identity, state-building and historical “rights,” national patrimony, culture and “mentality.” As such, they were exposed to political and ideological deployment.

The mutually warring national images of Byzantium were formed in constant dialogue with each other and with the western and Russian perceptions. The lecture will attempt to highlight, through a selection of case-studies, the internal contestations, tensions and negotiations between different interpretations within and between the national historiographical traditions as well as their transnational entanglements in the region and with western and eastern academic currents.

Professor Diana Mishkova is the director of the Center for Advanced Study, Sofia and a Professor in Modern History. Her work explores the history of scholarship and statehood in nineteenth and twentieth century Southeastern Europe. Her last book, Beyond Balkanism: the Scholarly Politics of Region Making, was published by Routledge in 2018.

Followed by a drinks reception