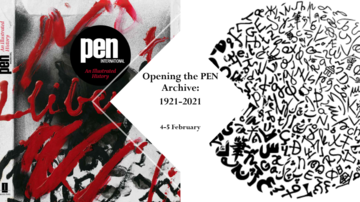 Advance booking is essential. Please note that tickets must be booked for each day of the conference separately. This conference will now take place entirely online.

Organised in collaboration with TORCH and St Hugh’s College in Oxford, this event is part of the AHRC-funded Writers and Free Expression Project.

One in a series of events marking the centenary of the world’s oldest and most prominent writers’ organisation, this two-day workshop reflects on PEN’s role in the history of literary activism, internationalism, and human rights. Bringing together researchers and writers, archival evidence and lived experience, it aims to address a range of questions about PEN’s past, present, and future. How has it worked to define legal, political, and cultural understandings of rights, particularly the right to free expression? What were, and are, the tensions between national centres and the universalist aspirations informing its international charters? What kind of literary activism did and does PEN practise and how has it intervened in debates about censorship, free expression, and linguistic rights within and beyond state structures? And, not least, what significance has it had for writers facing terror, repression, and worse?

MARGARET ATWOOD, whose work has been published in more than 45 countries, is the author of more than 50 books of fiction, poetry, critical essays, and graphic novels. Dearly, her first collection of poetry in over a decade, was published November 2020. Her latest novel, The Testaments, is a co-winner of the 2019 Booker Prize. It is the long-awaited sequel to The Handmaid’s Tale, now an award-winning TV series. Her other works of fiction include Cat’s Eye, finalist for the 1989 Booker Prize; Alias Grace, which won the Giller Prize in Canada and the Premio Mondello in Italy; The Blind Assassin, winner of the 2000 Booker Prize; The MaddAddam Trilogy; and Hag-Seed. She is the recipient of numerous awards, including the Peace Prize of the German Book Trade, the Franz Kafka International Literary Prize, the PEN Center USA Lifetime Achievement Award, and the Los Angeles Times Innovator’s Award. She lives in Toronto.

KATHERINE COOPER is Lecturer in Modern and Contemporary Literature at the University of East Anglia. Her research focuses on activism and literature, looking specifically at human rights, displacement and migration in the literature of the twentieth and twenty-first centuries. A BBC/AHRC New Generation Thinker, her first book War, Nation and Europe in the Novels of Storm Jameson was published with Bloomsbury in 2020. Her current project looks at how British writers like Jameson formed activist networks to help refugees during World War Two, focussing particularly on the work of English PEN.

ELLEKE BOEHMER is Fellow of the Royal Historical Society and Fellow of the Royal Literary Society. She is Professor of World Literature in English at the University of Oxford and directs the Oxford Centre for Life-Writing. Her recent publications include Postcolonial Poetics (2018), Indian Arrivals (2015), ESSE prize-winner 2015-16, as well as the short-story collection To the Volcano (2019) and the novel The Shouting in the Dark (2015 co-winner Olive Schreiner Prize for Prose).

MICHELLE KELLY is a Departmental Lecturer in World Literature in English at the Faculty of English Language and Literature, University of Oxford. Her research is in the area of world literature, with a particular focus on South African literature. She is interested in confessional narrative forms, the intersections between law and literature, prison writing, book history, and literature’s many intersections with other art forms and media. She has published several articles on J. M. Coetzee and is the editor, with Claire Westall, of Prison Writing and the Literary World: Imprisonment, Institutionality and Questions of Literary Practice (Routledge, 2020), to which she contributed an essay on PEN.

HYEI JIN KIM is a DPhil student in English at the University of Oxford. Her research examines the makings of world literature in UNESCO and its longtime partner PEN International throughout the 20th century.

NANDINI KRISHNAN is the author of Hitched: The Modern Indian Woman and Arranged Marriage (2013) and Invisible Men: Inside India’s Transmasculine Networks (2018). She has translated Perumal Murugan’s novel Estuary (2020), his short story collection Four Strokes of Luck (2021), and several of his poems. Her novel-in-manuscript won the Caravan and Festival des Écrivains du Monde prize in 2014. She has written several plays and screenplays, and is working on a novel. She lives in Madras and serves 27 four-legged masters.

PETER D. MCDONALD is Professor of English and Related Literature at the University of Oxford and a Fellow of St Hugh’s College. He writes on literature, the modern state and the freedom of expression; the history of writing systems, cultural institutions and publishing; multilingualism, translation and interculturality; and on the promise of creative criticism. His main publications include British Literary Culture and Publishing Practice, 1888-1914 (CUP, 1997), The Literature Police: Apartheid Censorship and its Cultural Consequences (OUP, 2009, theliteraturepolice.com), and Artefacts of Writing: Ideas of the State and Communities of Letters from Matthew Arnold to Xu Bing (OUP, 2017, artefactsofwriting.com). He is also co-author of PEN: An Illustrated History (Thames & Hudson, UK edition, 2021).

PERUMAL MURUGAN, one of India’s best-known writers and a master storyteller in Tamil, Perumal Murugan has written award-winning novels, short stories and poems. He is also a professor of Tamil language and literature and a beloved teacher. His best-known work is the novel Maadorubagan (One Part Woman) that attracted fierce controversy along with immense critical acclaim. He is one of the vice-presidents of PEN International, and lives in Namakkal (Tamil Nadu) where he is the Principal of the Government Arts College.

RACHEL POTTER is a Professor of Modern Literature at the University of East Anglia. She has written extensively on modernist literature and culture. More recently her work has focused on literature and censorship, free expression and writers’ organisations, most notably International P.E.N. Her books include Obscene Modernism: Literary censorship and experiment, 1900-1940 (OUP, 2013), The Edinburgh Guide to Modernist Literature (EUP, 2012) and Modernism and Democracy: Literary Culture, 1900-1930 (OUP, 2006).

NOO SARO-WIWA was born in Nigeria and raised in England. Her first book, Looking for Transwonderland: Travels in Nigeria (Granta, 2012), was selected as BBC Radio 4’s Book of the Week in 2012, and was named The Sunday Times Travel Book of the Year, 2012. The book has been translated into French and Italian. Noo writes book reviews, travel and opinion articles for publications, including the Guardian, The Times Literary Supplement, Condé Nast Traveller, and City AM. Her next non-fiction travel narrative, Black Ghosts, will be published in 2023.

CHINMAY SHARMA is an Assistant Professor in the English Department at Shiv Nadar University, Delhi NCR. His research interests include print, performance and visual cultures in Hindi and English in post-Independence India, with specific expertise in Cultural Studies, performance and media studies, Postcolonial theories and literature, comparative literature and world literature. His essay on the rise of mythological re-tellings in science fiction novels and graphic novels in Indian Writing in English was published in a collected volume of essays titled Indian Genre Fiction by Routledge UK in 2019. His short essay on the history of the English-language, CIA-funded, Indian magazine, Quest, and its first editor, the great modern Indian English poet, Nissim Ezekiel, was published in a collected volume of essays titled Parapolitics by MIT Press in collaboration with HKW Berlin, in February, 2021. He has a short story entitled ‘Hostile Environment’ forthcoming in 2022 at Wasafiri in London.

LAETITIA ZECCHINI is a research fellow at the CNRS, and visiting scholar at the Department of World Languages and Literatures at Boston University. She writes on contemporary Indian literature, especially poetry, postcolonial modernisms and the politics of literature. She has authored a monograph on the poet Arun Kolatkar (Arun Kolatkar and Modernism in India, Moving Lines, Bloomsbury, 2014) whom she has translated into French, and her recent publications include several co-edited or co-authored volumes: ‘The Worlds of Bombay Poetry’ (Journal of Postcolonial Writing, 2017); ‘The Locations of (World) Literature; Perspectives from Africa and South Asia’ (Journal of World Literature, 2019); Décentrer le Cosmopolitisme (EUD, 2019); The Form of Ideology and the Ideology of Form: Cold War, Decolonization and Third World Print Cultures (Open Book Publishers, in press); PEN International: An Illustrated History (2021).