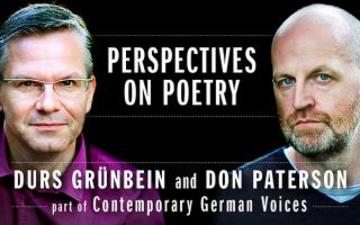 In a meeting of minds across the English/German linguistic divide, celebrated poets Don Paterson and Durs Grünbein draw on a common understanding of poetry, joined by translator Karen Leeder.

Poet in the City presents the second event in the Contemporary German Voices series, bringing together two leading poets from Germany and the UK.

Don Paterson and Durs Grünbein draw on a common understanding of poetry: its classical forms and traditions, its larger ambitions. Here, they are joined by translator Karen Leeder, in a meeting of minds across the English/German linguistic divide - a unique opportunity to experience live poetry in conversation.

This event is free to attend, but places should be booked in advance via: perspectivesonpoetry2.eventbrite.co.uk

Durs Grünbein is an award winning German poet. He has published numerous collections of poetry and essays in German, and has translated a variety of authors, including John Ashbery, Samuel Beckett, Henri Michaux, and classic texts from Aeschylus. His poems have been translated into English by Michael Hofmann and published in Ashes for Breakfast: Selected Poems (2005).

A poet who is frequently described as the best to emerge in Germany since the fall of the Berlin Wall, ‘Durs Grünbein's poems read as if the forces of history pressing in on the present drove them into this world.’ New York Times

Don Paterson is an award winning UK poet. His is author of several award winning poetry collections including Rain (Faber) which won the Forward Prize 2009. He has been awarded T S Eliot Prize on two occasions. He received the OBE in 2008 and the Queen’s Gold Medal for Poetry in 2010.

‘Dynamic, interrogative and unsettling; crafted yet open-ended; fiercely smart, savage and stirring – from the get-go, Don Paterson's poetry has been essential reading.’ The Guardian