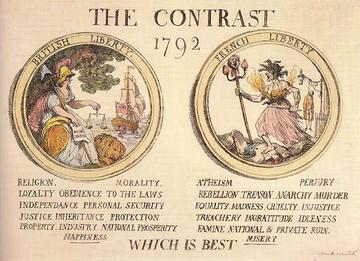 The TORCH Crisis, Extremes, and Apocalypse network are hosting an event on 'Democracy and its discontents: Rousseau, Robespierre, Paine'. Since 2007, the unravelling of the neoliberal hegemony has triggered a resurgence of anxieties regarding the so-called populist threat inherent to democracy. Warnings against the threat of mob rule often refer back to the classic opposition between the French and the American revolutions, recently restated by Jonathan Israel, Ernesto Laclau, John Dunn or Waller Newell: the French revolution, we are told, promoted a Rousseauan egalitarianism that inevitably lead to the Terror, which itself laid the groundworks for totalitarianism and even Islamic fundamentalism. The American revolution, on the other hand, achieved stability by sheltering individual liberty from collective sovereignty. This tale of two countries has its heroes (Thomas Paine) and villains (Rousseau, Robespierre). By reassessing the thoughts and deeds of these three figures as well as the relation between them, Yannick Bosc, Daniel Thévenon and Olivier Tonneau will endeavour to reconsider the opposition between liberty and equality, and thus the thesis that the demos is democracy's worst enemy.

The view that the Terror can be traced back to the beliefs Robespierre inherited from Rousseau is historically unsustainable yet astonishingly popular. I make the opposite claim: the policies he advocated from 1789 to 1793 aimed to prevent the breakdown of the social order which he knew would lead to chaos and military dictatorship. Robespierre’s influence on the course of events was, however, very small until 1793. Could his policies have prevented the Terror? I present a series of counter-factual histories to answer affirmatively.

Thomas Paine and Robespierre: the Terror of the Rights of Man

The historiography opposes Paine and Robespierre as two models of republicanism. On the one hand, Paine the democrat stands for the Moderns, and on the other hand Robespierre the tyrant is the incarnation of a potentially totalitarian Classical republicanism. However, in 1795, the Assembly judged that the principles exposed three years before by Thomas Paine in his book Rights of Man were that of a terrorist, an anarchist and a demagogue.  Against the  standard narrative of modernity we have inherited, the Thermidorian  period shows that Paine shared with the Montagnards, and mainly with Robespierre, a conception of the republic based on an idea of freedom defined as equality of personal rights - a  conception that the Convention sough to eradicate in 1795.

Rousseau, Freedom and the French Revolution

From Benjamin Constant to Isaiah Berlin, many are those who have accused Rousseau of inspiring the worst excesses of the French Revolution.  By championing a dangerously ambitious ideal of liberty imported from Antiquity and bequeathing it to his Jacobin disciples, it is argued, the "Citizen of Geneva" laid the foundations of the nightmare that was the Terror.  Regardless of whether or not it accurately portrays the events of the French Revolution, it can be said with confidence that such an interpretation rests on an oversimplification of Rousseau's thoughts on freedom.  Far from reducing liberty to a citizenry's collective surrender to the State, as some have claimed, the author of the Social Contract instead explores different possible forms of liberation, whether natural independence, republican liberty, or moral freedom, and is alive to the tensions that may exist between them.

The event will be followed by tea, coffee and cakes in the Colin Matthew Room.