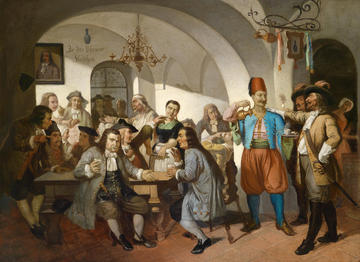 TORCH Oxford Comparative Criticism and Translation programme are hosting a workshop Salons, Circles, Majalis: The Sociable Side of Literature.

Bihani Sarkar (Oriental Institute, University of Oxford): Poets at the courts of kings in the Sanskrit tradition

Literary gatherings - salons, majalis, circles and others - have been central to both the production and consumption of literature across a wide range of periods and cultural settings. Yet discussions of them have tended to be restricted to a single timeframe or cultural space - the Islamicate majlis, the Enlightenment salon, and so on. This workshop aims, instead, to compare literary gatherings from a wide variety of different cultures, both as elements in the process of creating and experiencing literature and as practices of sociability with aspects that went far beyond the literary. Participants are asked to consider the following sets of questions, among others:

Through what techniques and sources can we access the particular fleeting events of the gatherings themselves? To what extent can we ever aim to recapture a gathering as it actually was, as opposed to later anecdotal accounts, prescriptive rules, or literary texts derived from it?

What were the conventions governing different types of gathering? Who could participate, where did they happen, what forms did speech or performance take? Were there codified rules, or accepted normal practices?

How did gatherings, as largely oral settings, interact with different forms of the written? Were texts read; were oral performances spontaneous; was literacy necessary for participation?

Besides the literary or intellectual, what were the other purposes of gatherings? Were they also more spaces of a more general sociability? Were they arenas for the enactment of status and power?

The conventions of our own gathering (or workshop) will involve a number of 20-minute presentations, each followed by 30 minutes of discussion, plus breaks for coffee and lunch. The generous discussion time should allow comparative themes to be pursued. In addition, participants who are not making formal presentations are encouraged to introduce further examples of gatherings to the discussion.

Numbers are limited, so those interested in participating are requested to contact Peter Hill (peter.hill@chch.ox.ac.uk) in advance of the event.