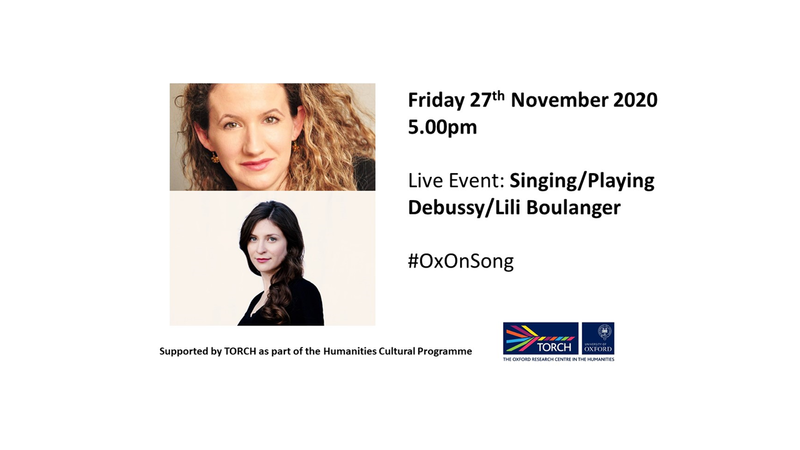 Claude Debussy (1862-1918) is often seen as the first truly modern composer. What does playing or singing Debussy mean for contemporary performers? At a time when live concerts are impossible to organise, we bring together musicians from both sides of the Channel to discuss their work, in particular the song cycle Ariettes oubliées (texts by Verlaine) and the Préludes for piano.

Lili Boulanger (1893-1918) was a young prodigy who died 10 days before Debussy. Her Clairières du Ciel include a setting of "Elle était descendue" by Francis Jammes.

The event will include an exclusive performance of "Elle était descendue" and the announcement of the winners of the #OxOnSong translation competition.

The musicians, Eloïse Bella Kohn and Anna Sideris, will be joined in conversation by Laura Tunbridge and Catriona Seth.

French pianist Eloïse Bella Kohn was named summer 2016 Diapason magazine’s Jeune Talent and has been a “Yamaha Artist” since 2018. Her recording of Debussy’s Préludes was awarded a “CHOC de Classica” evaluation and was nominated in three categories for the prestigious German record prize OPUS KLASSIK 2019.

British lyric colaratura soprano Anna Sideris read music at Oxford before obtaining a Masters from the Royal Academy of Music and taking the Opera Course at the Guildhall School of Music and Drama.

Daniel Propper is a Swedish pianist of Austrian origin living in France. His many recordings include the Goldberg Variations by J.S. Bach, the Lyric Pieces by Grieg or music inspired by Byron, Lamartine or even Napoleon with his award-winning CD Echoes from the Battlefield.