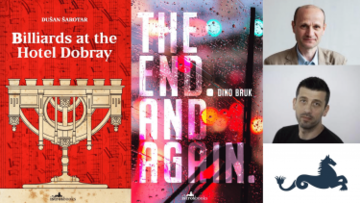 In the narrow corridors and dark rooms of the once-elegant Hotel Dobray in the sleepy town of Sóbota, in a forgotten land wedged between Hungary and Yugoslavia, human destinies collide like the billiard balls in the hotel’s casino. It is late March 1945 and the long war is nearing its end. The Soviet Union’s Red Army will soon arrive to liberate the town, although no one knows what to expect. József Sárdy, the ruthless leader of a small Hungarian occupation unit stationed at the Hotel Dobray, is preparing for his final battle, even as his debauched soldiers succumb to melancholy and despair. Local industrialist Josip Benko hopes the end of the war will mean large profits for his factory, yet he is doing all he can to save his dying world. And Linna, a former singer who works as a prostitute in the hotel, must confront her divided loyalties. But before her song falls silent, the Jewish merchant Franz Schwartz, one of the few to survive the horrors of Auschwitz, returns to Sóbota on foot, pursuing the strains of a remembered violin.

About the author:
Šarotar was born in the town of Murska Sobota in northeastern Slovenia. He studied sociology and philosophy at the University of Ljubljana. He has published several essays and columns in renowned Slovenian journals, such as Mladina, Nova revija, and Sodobnost. His best known novel is "Billiards at the Hotel Dobray" (Bilijard v Dobrayu), an account of the persecution of Jews in Murska Sobota at the end of the Second World War from the perspective of a Holocaust survivor returning from a concentration camp. The novel, first published in Slovene in 2007, is based on the story of Šarotar's own grandfather.

The End. And Again, by Dino Bauk

A roofless library in the middle of war-torn Bosnia, staffed by a mysterious woman who leads a young solider through hidden doorways. A businessman hiding from an angry mob of unpaid workers in a suitcase and a lonely divorcé who picks up a mysterious hitch-hiker, only to be lured by her into an unfamiliar forest. The End. And Again offers a beguiling, imaginative reworking of the history of the independence of Slovenia and the break-up of Yugoslavia through the eyes of its four main characters - like the line-up of a pop group – Peter, Goran, Denis and Mary. Their memories of the years when their interests revolved more around music and love than around the turbulent political situation that derailed their lives intersect with those of Denis, the only one of them to be enlisted and sent into battle. A lack of any meaningful resolution to their mutual story haunts them all and forces them to search for a different end(ing). (And) Again.

Dino Bauk (1972) is a lawyer, former Head of Cabinet of the Minister of Education and columnist for the prominent Slovenian weekly Mladina. He wrote a few short stories before bursting onto the literary scene with his debut novel The End. And Again (Konec. Znova, 2015). The novel received the Best Debut Award the year it was published and was nominated for the Kresnik Award for best novel of the year. So far it has been translated into German and Croatian, the Serbian translation is forthcoming. Bauk is currently working on his second novel.

This event is supported by Istros Books, the Slovenia Book Agency, and the EU Cultural Fund.