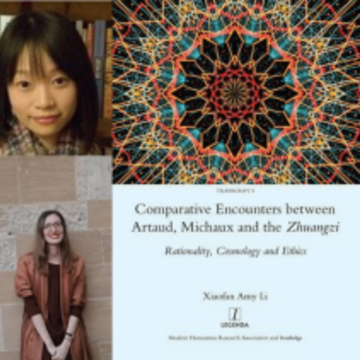 1) Reading Dante and Proust by Analogy, and 2) Comparative Encounters between Artaud, Michaux and the Zhuangzi: Rationality, Cosmology and Ethics

Bios: Dr Xiaofan Amy Li is Lecturer in Comparative Cultural Studies at University College London. Prior to joining UCL, Amy was Junior Research Fellow in Comparative Literature & Translation at St Anne's College, Oxford, and then Lecturer in Comparative Literature at the University of Kent. Amy's research spans comparisons and literary exchanges between France, China, and East Asia broadly speaking. Her publications include the monograph Comparative Encounters between Artaud, Michaux and the Zhuangzi (Legenda, 2015), and a co-authored book entitled Translation and Literature in East Asia: Between visibility and invisibility (Routledge, 2019).

Dr Julia Hartley completed her BA and PhD in Medieval & Modern Languages (French and Italian) at the University of Oxford and arrived at Warwick in 2018 as a Leverhulme Early Career Fellow, to work on French perceptions of Iran in the long nineteenth century under the mentorship of James Hodkinson. Prior to that she was a Laming Fellow at the Queen's College, Oxford, where she remains an honorary fellow. She recently published Reading Dante and Proust by Analogy (Legenda).