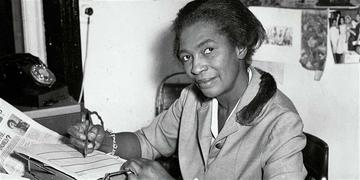 This event is cancelled. We apologise for the inconvenience.

Claudia Jones was a Trinidad-born journalist and activist. A prominent feminist and communist, her best-known writing is "An End to the Neglect of the Problems of the Negro Woman!", which reflects what would come to be known as intersectional analysis. She was deported from the United States, where she had living since she was a child, in 1955 for her political activities. She moved to Britain, where she started the UK's first major black newspaper, West Indian Gazette, in 1958. This was a major contributor to the rise of consciousness within the Black British community. Jones is perhaps best remembered as the founder of the Notting Hill Carnival.