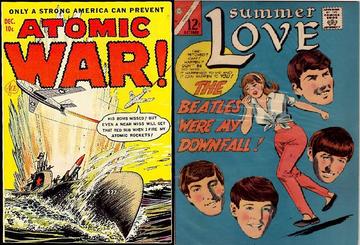 “In fact it’s cold as Hell”: Interstellar and Interplanetary Travel in American Comics of the Early Cold War

In the formative years of the Cold War, space was seen as the ultimate goal of manifest destiny: a final frontier. Like other forms of the travel narrative, such as international travel or the more fantastical time travel, space travel tapped into contemporary anxieties. This paper will look at the depiction of space travel in a selection of comic-books in an attempt to explore space as a ‘space’ to work through the constellations of issues that constituted the American Century.

Sketching the Untouchable: A Study of The Beatles in Cartoon and Comics

Since their rise to international renown, the Beatles have been depicted countless times through film, the written word, street art, merchandise - and cartoon. Yet how does one approach the task of presenting four musical icons in pen and ink? The Beatles' story and characters quickly became mythologised, and the music elevated beyond criticism, rendering them difficult to pin down in this nebulous medium sitting between the cinematic and the banal. This talk will examine the various angles taken towards depicting the Beatles in cartoon and comics, from the faithful to the insulting, from the absurd to the inspired.