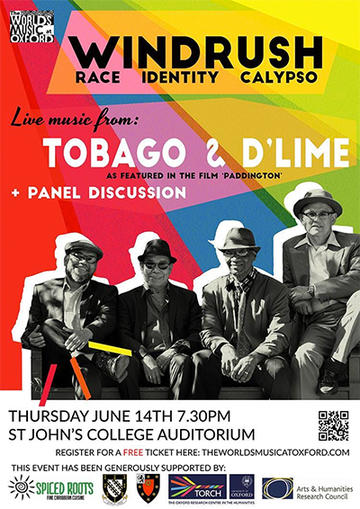 2018 marks the seventieth anniversary of the arrival of the MV Empire Windrush at London's Tilbury Docks in June 1948, a now iconic moment in modern British history. Among those onboard was calypsonian Lord Kitchener, who famously sung to the gathered television cameras that 'London is the Place for Me'. In the years that followed, calypso became a key way that the likes of Kitchener and other Caribbean migrants made sense of their experiences - both good and bad - of settling in the UK.

On 14th June from 7.30pm, leading calypsonians Tobago and d'Lime will be coming to play at St John's College Auditorium in Oxford to commemorate this anniversary. This is your chance to see one of the best calypso bands in the business, and also hear a rich discussion on the history of calypso music, the legacies of the Windrush, and Caribbean culture in the UK with a panel of experts.

"This event provides an opportunity to celebrate the multifaceted contributions made by Caribbean migrants to Britain in light of the recent scandal uncovering the shocking mistreatment of the Windrush generation at the hands of the Home Office. At the end of the concert we will be collecting donations for the Windrush Justice Fund to support those so let down by the British government.

More information about The World's Music at Oxford.

Humanities & Identities
The Oxford Song Network: Poetry and Performance
Race and Resistance across Borders in the Long Twentieth Century