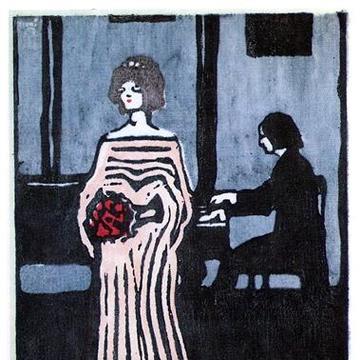 UK Premiere of an Art-Song programme by composer Stella Lerner – one of the most fascinating voices to emerge in Israel in recent years –interpreting poems by Leah Goldberg (1911-1970), a classic icon of Hebrew-Israeli poetry.

Songs by contemporary Israeli composer Stella Lerner to words by Leah Goldberg (1911-1970), a classic icon of Hebrew-Israeli poetry, performed in the original Hebrew and in Avshalom Guissin’s English translations. The concert will be followed by a panel-discussion.

For the first time in Britain, this recital presents songs by the composer Stella Lerner – one of the unique and most fascinating voices heard in Israel for the past several years. The composer creates art-songs at the highest level of the classic European Lied style. These songs – with their singular musical qualities and the impressive ability for striking and accurate expression which characterises them – have earned this unique artist an honorary seat alongside the most prominent creators of the Lied tradition.
At the centre of Lerner’s work with the art-song genre are her settings for poems by Leah Goldberg (1911-1970), whose place at the heart of the twentieth century Hebrew poetry canon is indisputable. Lerner’s compositions are attentive to the emotional powers and rich texture of the poet’s crystallised texts, and bestow on them a deep and sensitive interpretation, which is often surprising and subversive. These pieces present a winning combination of harmonic and melodic compositional expertise, dramatic expressivity, intellectual thinking and gendered identity.

Stella Lerner’s songs have received a wide embracing audience in Israel. The Israel Music Institute (IMI), the foremost publisher for art music in Israel, published her songs and produced an album of their recorded performances, which are often played both in live concerts and on the Israeli Broadcasting Corporation’s classical channel. The recital will include some of the songs in their Hebrew original as well as in English translations, which were commissioned in preparation for the British recital. The work of the translator, Avshalom Guissin, is artful in its own right, both as full-fledged poetic translations and as music-linked, singable texts. Managing these two forms of translation in one text is a feat in itself.

This recital, proposed by the pianist Marc Verter (Guildhall School of Music and Drama; Royal College of Music), will present Lerner’s Goldberg settings both in the original Hebrew and in English translations, which capture the elusive dialogue between Goldberg’s poetic universe and Lerner’s music. The soprano Prof. Sharon Rostorf-Zamir (Head of the Vocal Department, Buchmann-Mehta School of Music, Tel Aviv University) has long been a passionate advocate of Lerner’s music, and her ardent and refined performances give voice to Lerner’s expressive depth and dramatic intensity.

This recital presents a significant contribution both to the world of the art song and to the cultural dialogue between Israel and Britain on music, poetry and artistic performance.

Free and open to all, retiring collection. Booking is advised to guarantee a seat.

For more details and to reserve your ticket, please follow the link.