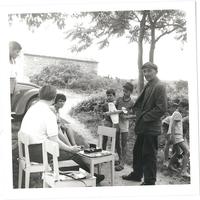 The project builds on knowledge gained through the John Fell-funded project ISTROX: The Istro-Romanian Language and the Oxford University Hurren Donation (Sept. 2018- July 2021) and the PER Seed-funded Diasporic Istro-Romanians online (Jan-June 2021). It involves a partnership between the ISTROX project and the Lapidarium Museum (Novigrad, Croatia), to increase the online engagement of our research participants - the remaining speakers of a severely endangered language, Istro-Romanian. Istro-Romanian is closely related to Romanian, but long separated from it and spoken traditionally in the Istrian peninsula in Croatia, and more recently also by a diasporic community outside Croatia.

ISTROX is an interdisciplinary project which combines linguistic analysis and online community-sourcing to explore the history of what linguists call the ‘Istro-Romanian’ language. At the core of the project is a body of heritage audio material gathered in the 1960s in the Istro-Romanian-speaking villages and donated to the University in 2010/2017 (see ORA (Oxford University Research Archive).

Lapidarium is a regional museum around 70km from the Istro-Romanian villages, which focuses on the cultural heritage of Istria.

We will work with Lapidarium to expand our pool of contacts among Istro-Romanians in Croatia and the diaspora, and to overcome their observed technological reluctance of the remaining speakers of the language to contribute on our Zooniverse site at a time when field interviews are difficult due to the pandemic. We will do this by sharing through our social media channels selected heritage audio and photo material, to explore this as a way of acquiring linguistic information from the community and thereby gain a sense of proficiency in the language within and beyond Croatia. By doing this, we aim to avoid loss of momentum between past and future segments of the ISTROX project, maintain and build contact with remaining speakers of the language worldwide, and introduce Lapidarium into the conversation, to prepare the ground for our subsequent collaboration, which includes an exhibition in Novigrad planned for summer 2022.