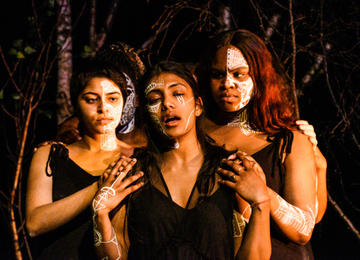 Part of the Humanities Cultural Programme, one of the founding stones for thefuture Stephen A. Schwarzman Centre for the Humanities.

A new adaption of Euripides' Medea

Theatre is at its best when it is diverse. It’s about living, about people, about educating and sharing through creativity. That is our founding principle at Khameleon Productions. Celebration of diverse cultures is at the heart of everything we do. We want to platform unexplored narratives, untold stories, and new outlooks through interdisciplinary creative forms.

In 2018, Medea was created to tackle the lack of diverse theatre at Oxford University. We were driven by the desire to bring numerous cultures and people of colour together to perform this powerful, classical story in a reimagined way, through original music, movement and spoken word.

Medea’s sold-out run at Oxford’s Keble O’Reilly Theatre attracted all kinds of local and national attention. Responses from audiences were excellent, with a standing ovation at every show, and it brought people into theatre who previously didn’t realise it was for them.

We are in the Research & Development stage of bringing this show to London.

Shivaike Shah (producer and writer) hosts a podcast series with the artists and academics on the team in order to create a dialogue with potential audiences. The podcasts discuss the collaborations on Medea and explores the work of each guest beyond the ‘Medea’ project. This podcast series features Francesca Amewudah-Rivers, Azan Ahmed, Simran Uppal, Rosa Andujar, Avery Willis-Hoffman, and project lead, Professor Fiona Macintosh

Supported by the Humanities Cultural Programme and the Arts Council England

Medea - Exiled from Corinth and deserted by her husband. Granddaughter of sun-god Helios, and princess of Colchis, Medea is powerful, and she turns her strength on her betrayer. Foreign but fierce, Medea will exact her cruel, awesome revenge.

Jason has abandoned his wife, Medea, and their two children. He is planning the wedding arrangements for his remarriage to Creusa, the daughter of Creon, king of the land, with the hope that this marriage will bring him security and prosperity.

News spreads of Medea’s hateful cursing of her husband and his new fiancée. Fearing she plans revenge, Creon banishes Medea and her children. After pleading for mercy, Medea is allowed one day before she must leave, during which, she completes her infamous quest for "justice"— killing Creusa and Creon with a wedding gift covered in poison, before committing the final gruesome act of killing her own children.

Medea is not just a story about gods and kings, myths and legends, dragons and golden fleeces. It’s a powerful exploration of displacement, belonging, and identity.

In our contemporary adaptation of this classic text, we platform diasporic voices through interweaving original live music and spoken word performed by our ‘Chorus of Corinthians’, who sing Medea’s message: a call for justice, and a call to action.

We know this story well, but we don’t know it told like this.