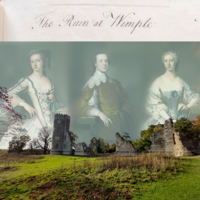 ‘Mithraic Groves and Gothic Towers: Reuniting the Lost Literary Legacies of Wrest and Wimpole’ is a one-year Knowledge Exchange Fellowship between the University of Oxford, English Heritage, and the National Trust. The project aims to uncover the vibrant intellectual culture that characterised Wrest Park and Wimpole Hall in the eighteenth-century when both properties were owned by Philip Yorke, second earl of Hardwicke, and Jemima Marchioness Grey. Yorke and Grey, sharing a passion for gardens, architecture, and books, regularly invited their like-minded friends to Wrest Park and Wimpole Hall where they collaborated on private literary projects and created intellectual games in the gardens. Despite the close historical connection between the two properties, today Wrest Park, with its famous Mithraic Grove, is owned by English Heritage, and Wimpole Hall, with its Gothic Tower, is owned by the National Trust. This collaboration between Oxford English Faculty, English Heritage, and the National Trust will bring together Wrest and Wimpole together once more to revive the rich literary and intellectual cultures that once united them.

There are three components to the project that will showcase different generations of the literary culture at Wrest Park and Wimpole Hall. The first is an inscription for the Gothic Tower at Wimpole Hall, that Philip Yorke wrote with his friend, the antiquary Daniel Wray. The enigmatic Gothic Tower has long baffled researchers, but new archival research provides some clues as to how we might interpret the inscription.

In addition, this project will create an exhibition around the Yorke family portraits at Wimpole Hall, using their private compositions in the Wrestiana Manuscript and their correspondence with one another to give visitors a sense of the real people behind the gilded frames: their social networks, literary interests, and playful humour.

Finally, the project will perform 'The Woodcutter', a Yorke family play written by Elizabeth Countess of Hardwicke for the grandchildren of the original Wrest circle. The play was privately staged at Wimpole in 1797 and at re-performed at Wrest Park in 1849, showing how far private theatricals were an integral part of family entertainment in the country house. Performed and directed by undergraduate students at Lady Margaret Hall, the play will be staged at Lady Margaret Hall before going on tour to the places where it was first performed, Wimpole Hall and Wrest Park.