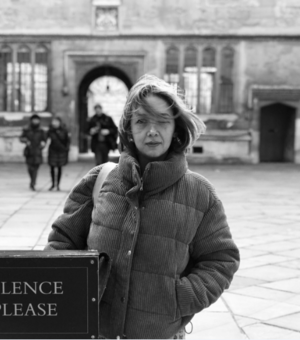 Suzan Meryem Rosita Kalayci is a Junior Research Fellow at Pembroke College and the British Academy Fellow at the Faculty of History.  Her interest in the notion of silence arises from the work she has done on the Armenian genocide, for which she has received several awards.  Her first book on the topic was a completely empty book (2010, 2015) which is on view in several library and art collections around the world.  The book is a retake on what the American poet Muriel Rukeyser said in 1949: ‘During the war, we felt the silence in the policy of the governments of English-speaking countries.  That policy was to win the war first, and work out the meanings afterward.  The result was, of course, that the meanings were lost.’

Her forthcoming monograph Reading Silences: Essays on Women, Memory and War in 20th Century Turkey (under contract with Degruyter) discusses how the subject of the Armenian genocide—despite being absent from Turkey’s national narrative—returns as a contemporary discourse which revolves around ‘what is spoken about but not said, and what is not said but is spoken about’. It explores the relationships between silence, voice and power in historical narratives. Moving on from ‘reading silences’, she is now thinking about how to see silence/s in history.

She is also an active Quaker and member of the Oxford Meeting.