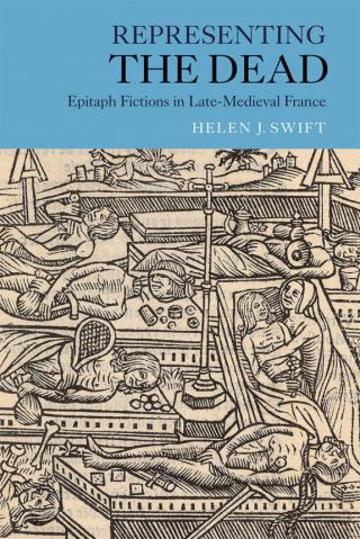 Who am I when I am dead? Several late-medieval French writers used literary representation of the dead as a springboard for exploring the nature of human being. Death is a critical moment for identity definition: one is remembered, forgotten or, worse, misremembered. Works in prose and verse by authors from Alain Chartier to Jean Bouchet record characters' deaths, but what distinguishes them as epitaph fictions is not their commemoration of the deceased, so much as their interrogation of how, by whom, and to what purpose posthumous identity is constituted. Far from rigidly memorialising the dead, they exhibit a productive messiness in the processes by which identity is composed in the moment of its decomposition as a complex interplay between body, voice and text. The cemeteries, hospitals, temples and testaments of fifteenth- and early-sixteenth-century literature, from the "Belle Dame sans mercy" querelle to Le Jugement poetic de l'honneur femenin, present a wealth of ambulant corpses, disembodied voices, animated effigies, martyrs for love and material echoes of the past which invite readers to approach epitaphic identity as a challenging question: here lies who, exactly? In its broadest context, this study casts fresh light on ideas of selfhood in medieval culture as well as on contemporary conceptions of the capacities and purposes of literary representation itself.

In this Book at Lunchtime event on Representing the Dead: Epitaph Fictions in Late-Medieval France, author Helen J. Swift (Medieval and Modern Languages, University of Oxford) joins an expert panel to discuss the book and its themes. Joining Helen are:

Lunch will be available from 12.30pm, the discussion will start at 1pm.

Booking is essential. Register for your seat here.