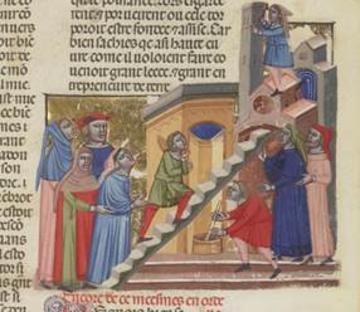 The shared seminars of Oxford Medieval Studies Programme take place every term on Tuesday of week 8, 5pm, followed by drinks. They are the main event of OMS and all medievalist groups are encouraged to use it as their main event for that week.

The Oxford Medieval Studies Lecture 2019 will be given by Prof. Simon Gaunt (London) on the topic of Babel and the language(s) of universal history in the Middle Ages

Universal histories—purporting to narrate all history from the Creation to now—were popular in the Middle Ages. One of the most widely disseminated universal histories—known as the Histoire ancienne jusqu’à César—was written in Flanders in French c.1210, but then circulated widely throughout the rest of the Middle Ages, particularly in Italy and the eastern Mediterranean, as well as in France, often in sumptuous illustrated copies. This lecture will focus upon the ideological freight of the Histoire ancienne being written and circulating in French in the light of the text’s own insistence on the value of being written ‘en nos lengue’. The analysis will draw on Jacques Derrida’s work on monolingualism and on the myth of a universal language, paying particular attention to the Histoire ancienne’s account of Babel, to the different visual style of manuscripts from different places (the Latin Kingdom of Jerusalem, Italy and France), and to the narrator’s own repeated designation of the text’s language as ‘ours’.  It will be argued that texts like the Histoire ancienne instantiate what might be called a ‘language network’ as opposed to the more familiar notions of a ‘language [or speech] community’ or indeed ‘textual community’.