A Tale of Kings, Lords and Legends

A Summer Internship Researching the ‘Lucks’ of Muncaster Castle

In July this year, along with another Oxford intern, Alex Beeton, I undertook a research internship with Muncaster Castle, supervised by Peter Frost-Pennington and Sharon Arrowsmith. Our project was to undertake research into two glass objects held by the castle – the ‘Luck’ and ‘Fake Luck’ of Muncaster – to clarify their provenance and histories.

An age-old tale held at the castle alongside these objects concerns Henry VI: according to legend, when on the run from a battle during the Wars of the Roses in the 1460s, he sought refuge at Muncaster Castle and found shelter there with Sir John Pennington. As a token of his gratitude, so the legend goes, Henry VI left a glass bowl at Muncaster along with a blessing of good fortune for the family as long as the bowl, which came to be known as the Luck of Muncaster, remained intact. Our investigation was into the origins and credence of this myth and its associated objects, and to trace their evolution through the centuries. Unfortunately, due to the pandemic, we were unable to access documents held at local or national archive centres but we were lucky enough to conduct Teams interviews with experts in Venetian glass and the Georgian period, as well as corresponding with local historians.

The first three weeks of the internship were dedicated to researching the two Lucks and their context; due to the closure of libraries and archives throughout the project, we made creative use of online research tools such as the Oxford Dictionary of National Biography and SOLO to compile mini-reports incorporating background information and more specific detail on the two objects. Whilst at Muncaster, we explored the castle’s library and collections to widen our understanding, and then wrote a professional report presenting our findings and their implications. Our research not only focused on the medieval context of the legend but spanned its development over the centuries, particularly focusing on myth-making and built heritage during the 18th century Gothic Revival.

The internship was partly completed on-site and partly working remotely. Working remotely brought its challenges – staying focused in a busy household and balancing other responsibilities – but it was very rewarding to be able to take the initiative and pursue my own research interests. Throughout the project, we had regular communication with Peter Frost-Pennington, who was very supportive, putting us in touch with various experts and ensuring we felt secure in our work. When working from a home, a typical work day involved perusing various primary and secondary sources online, emailing experts in fields from glass and ceramics to local ecclesiastical history and compiling themed documents summarising our findings – we were keen to approach these objects through multiple lenses, from a Cumbrian folkloric milieu to the nationwide political context. Although I tended to schedule my work days as if I were working 9-5 in an office, the freedom to take days off on whichever days best suited me on a given week was really useful and definitely a perk of remote work. 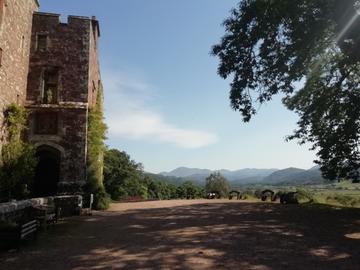 Panorama looking down the gorgeous Eskdale in beautiful summer weather – our working space in the medieval pele tower is visible on the left of the image. Photo by the author (July 2020).

The internship remained engaging and rewarding despite the pandemic. Alex and I had regular phone calls to coordinate our research and set out plans for the coming week; we spoke to Peter regularly as well. We were also lucky to be able to work on-site for part of the project, staying in the former medieval pele tower and working together in our own section of the castle to produce a 100-page report on our findings. Daily life on site started with cups of coffee and panoramic views across the Cumbrian mountains, or with meetings with Peter and the curatorial team, and we took lunch breaks at the castle’s Creeping Kate café before getting back to work proofreading and editing each other’s work amicably in the tower rooms. Being based in the Lake District, having our own transport was invaluable – in the evenings, we were able to take advantage of the local scenery, including stunning beaches and an evening trip to Wast Water, England’s deepest lake. We were also encouraged to explore local heritage sites with links to the legends we were researching, such as nearby Chapel’s Monument, a folly built by the first Lord Muncaster in the 1780s.

A welcome opportunity to carry out historical research in a professional setting, this internship provided Muncaster with a dedicated duo of researchers able to focus on a pair of objects which are hugely important both to the castle and in the study of glass artefacts. The castle, which is also open as a visitor attraction, is a busy hub of activity and there is not always the time for staff to focus so intently on one aspect of its history for such an extended period of time. Conversely, as interns, Alex and I benefitted from the opportunity to apply our skills of historical research to a real-world project – in addition to creating a report and visitor interpretation plan based on our findings for the castle, we hope to publish them in a local history journal next year. Working with Muncaster built my confidence in my ability to contribute effectively to a heritage workplace as well as my skills writing for professional, rather than tutorial, academic purposes, and I really valued the amount of independence and trust that was placed in Alex and I by the castle. The staff were all extremely welcoming and supportive and we were always treated as valued contributors to the site and its work. During our stays we also gained insight into the daily running of a large, multi-faceted private heritage attraction, from watching birds of prey shows to getting to see and measure the Luck itself (don’t worry – it’s still intact!).

Lily Tidman is a final year History and Politics undergraduate at St Hilda’s College. Growing up in southeast Cumbria, she is interested in local history, identity and cultural memory, especially how Cumbrian identity intersects with broader regional identities as Northern, English or British. She is interested in a broad range of periods from early medieval to modern and hopes to study for a Master’s degree after completing her Bachelor’s in summer 2021. 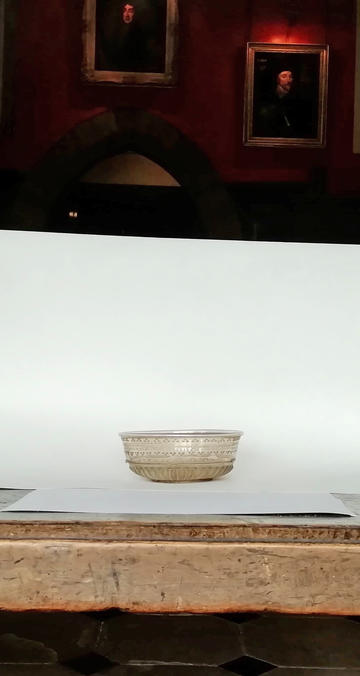 One of the glass items that were studied during the micro-internship. Photo by the author (July 2020).