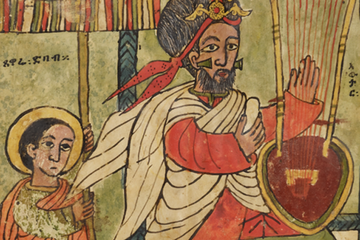 An image of King David from an Ethiopic Psalter. (© Bodleian Libraries)

The Heritage Partnerships Team is delighted to announce that Dr Jacopo Gnisci’s project Demarginalizing medieval Africa: Images, texts, and identity in early Solomonic Ethiopia (1270-1527) has been awarded an AHRC-DFG grant of roughly €700,000 (AHRC Grant Ref. no. AH/V002910/1; DFG Projektnummer 448410109). The project, which will benefit from the expertise of Professor Theo Maarten van Lint (Calouste Gulbenkian Professor of Armenian Studies, Faculty of Oriental Studies, University of Oxford), will be co-directed by Professor Dr Alessandro Bausi (Director of the Abteilung Afrikanistik und Äthiopistik and Director of the Hiob Ludolf Centre for Ethiopian and Eritrean Studies, Asien-Afrika-Institut, Universität Hamburg) and Dr Jacopo Gnisci (Lecturer in the Art and Cultures of the Global South, History of Art, UCL and Visiting Academic, The British Museum).

The Heritage Partnerships Team supported the development of this collaborative and inderdisciplinary project in its early stages with expert advice and Heritage Seed Funding, which alongside an OCBR grant helped the project take off. Well aware of the benefits of online access to cultural material and digital preservation, as well as of the implications brough by the pandemic, which Dr Gnisci discussed in detail here, we are thrilled to celebrate with him this major success.