Archaeology in your Pyjamas

Gearing up for the announcement of the next round of micro-internships in Hilary Term 2021, the Heritage Partnerships Team is pleased to host this blog post by Adam Dawson, who recently completed a micro-internship with the Endangered Archaeology in the Middle East and North Africa (EAMENA) project at the University of Oxford. The Heritage Partnerships Team advised EAMENA in setting up this placement in close collaboration with the Careers Service of the University of Oxford.

At the close of this very unusual Michaelmas term, I spent 5 days volunteering with the Endangered Archaeology of the Middle East and North Africa fund. As the name suggests EAMENA is a group dedicated to the identification and conservation of archaeological heritage in the Middle East and North Africa. I have just started the first year of my DPhil which primarily focuses on finding archaeological evidence for piracy. This may seem like a far cry from the research goals of EAMENA, but I have had a longstanding interest in satellite archaeology. For my master’s degree, I looked at how GIS and remote-sensing could be used to identify archaeological sites in Roman Cilicia (modern-day Southern-Turkey). Through this work, I often encountered sites, which were undocumented, degraded, or some combination of the two. As a result, I resonated strongly with EAMENA’s mission statement and jumped at the opportunity to work with them when this micro-internship became available.

My work during this internship primarily consisted of using Google Earth™ to comb areas for archaeological sites, which I then catalogued and assessed for any potential threats, such as encroaching construction projects or looting. In particular, I looked at a region of Saudi Arabia just off the coast of the Red Sea. Even in this relatively small area, I found hundreds of previously undiscovered prehistoric sites, ranging from small livestock enclosures to large burial complexes (Figure 1 & 2). Conveniently, this sort of remote work was ideal for an internship during COVID times. Despite the challenges, I was still able to meet daily with my supervisor Dr Michael Fradley via Teams, which gave me the added bonus of being able to meet his dog as well. On top of this, I attended team meetings which introduced to the inner workings of a large-scale research project. Furthermore, there were talks hosted by the Arcadia fund (the parent body of EAMENA) where we discussed cutting edge developments in Landscape Archaeology, such as the application of machine learning to site detection. While it was a shame to not be in an office environment, I have to say I greatly enjoyed being able to give updates to Michael and the principal investigator, Professor Andrew Wilson, without having to change out of my pyjamas! 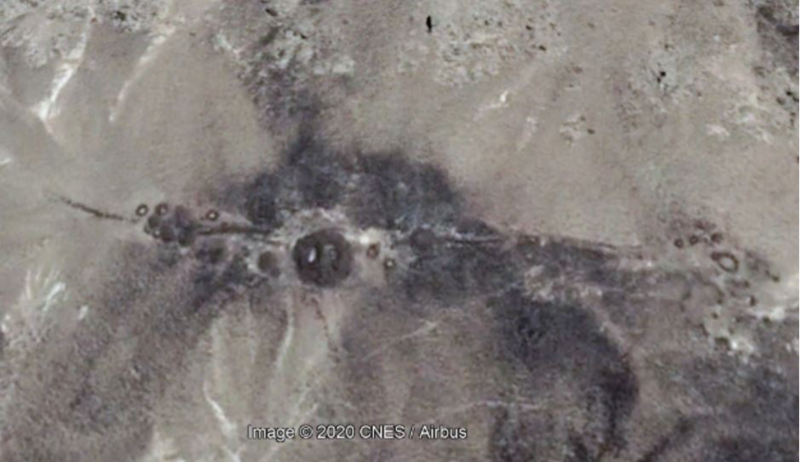 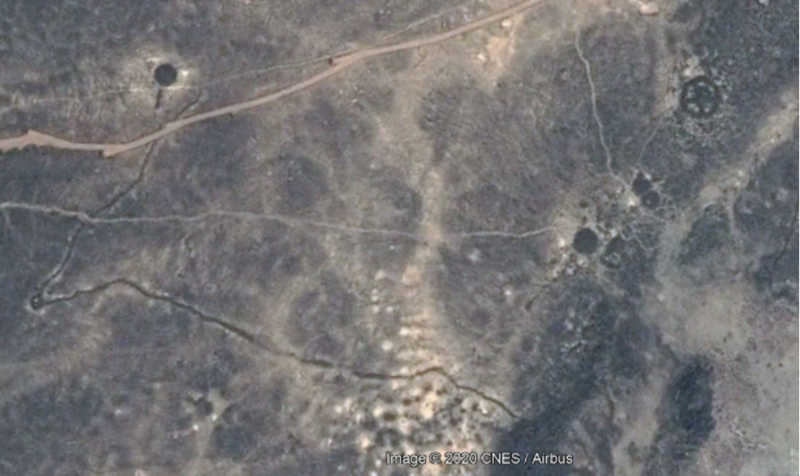 Figure 2. A series of funerary monuments (upper left & right) next to a Kite, a prehistoric megalith likely used for hunting (centre bottom & centre left) a man-made redirection of a nearby river has damaged the northern Kite tail (This image contains data from Google Earth™)

While I was very satisfied in helping contribute to EAMENA, what I have found most useful about this internship is the strong foundation I feel it has provided for the rest of my DPhil. Circumstances permitting the main aim of my DPhil is to use GIS and remote sensing to locate sites associated with piracy. These sites would then be used to create a general theory for the archaeology of piracy. Being able to discuss satellite interpretations with leading experts has greatly improved by own ability to interpret landscapes. This is where my supervisor Michael was really helpful, he was always on had willing to lend assistance or discuss tricky to define areas. This was really invaluable, you can gain a much greater understanding through a 10-minute conversation with an expert than staring for hours at a smudge on a computer screen tearing your hair out thinking “is that a feature?!”. On top of this experience EAMENA also offered assistance in sourcing high resolution satellite imagery, something which is universally agreed to be a painstaking and expensive process to undertake alone. Another unexpected outcome is that I have really benefited from seeing who a large-scale professional research group collects and handles data. In the coming years, I am hoping to build a large database of archaeological sites and materials. Working with EAMENA’s database has allowed me to think about how I will collect and record my own data. My fieldwork (if I ever get the chance to do it) will involve a fair amount of lone working and I will have to build my own databases from scratch, my work with EAMENA has made me feel much more prepared to undertake such a task.

This combination of support and experience, has given me a lot of confidence for my upcoming transfer, as I now feel I have both access to the materials I need and the methodological experience to carry out my research in a unique way. I would highly recommend a micro-internship to any DPhil student who is looking to hit the ground running with their project.

Adam Dawson is a first year DPhil student at the Oxford Centre for Maritime Archaeology and St Peter’s College. His primary interest is the study of piracy spanning from the 3rd century BC up to the modern day. He tweets @AMDarcheologist.

Endangered Archaeology in the Middle East and North Africa (EAMENA)