On Saturday, 11th May 2019, over 40 academics, students and activists met in the Doctorow Hall room of St Edmund Hall to hold a conference on the relationship between Medievalism and far right politics. Organisers Alyssa Steiner, a graduate student in Medieval German at St Edmund Hall, and Charlie Powell, a student on the MSt in Medieval Studies at Wadham College, describe the impetus behind organizing the conference, and the day itself.

In October, the two of us were discussing our concerns about the Oxford Union’s decision to invite Alice Weidel, leader of the far-right Alternative Für Deutschland (AfD) party in Germany, to give a speech to Union members. Discussing the AfD’s links with Neo-Nazi group Pegida, our conversation turned to the rise of far-right nationalism across Europe, and the narratives through which it is spreading. We had both witnessed medieval tropes, symbols, and stories being instrumentalised by contemporary far-right movements, from the violence of white supremacists calling themselves “alt-knights” in the USA to the racist backlash against a woman of colour representing Joan of Arc in Orleans. We quickly discovered countless examples of medieval symbols, stories and tropes providing inspiration and legitimation for contemporary far right movements across the world. In fact, the prevalence of medievalism within far-right discourse has a long history, which goes back to the romantic nationalism of the 19th century, a movement which also produced some of the first medieval scholars. We decided to organize a conference to explore these troubling relationships, and how medievalists might respond to the current political use of medievalism in our own capacity. 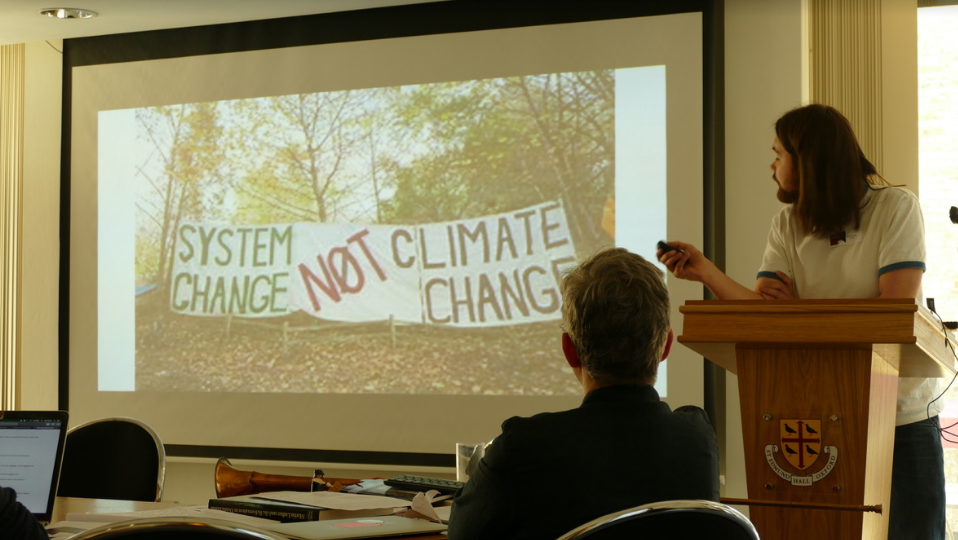 We quickly received a lot of interest, and abstract submissions for more papers than we could accommodate with a one-day event. The three areas on which we wanted to focus the discussion were racism and violence in medieval contexts; the politics and origins of medieval studies, and the instrumentalisation of the medieval in contemporary far right movements. In the end, the day was packed with ten papers and a plenary discussion: topics included violence in Anglo-Saxon literary portrayals of Judaism, the impact historical constructions of Islam and premodern Europe had on German policy in World War One, medievalism in contemporary far-right metal music, and the role of the medieval in growing eco-fascist movements. See the programme at the bottom of this post for the full list of papers with short abstracts, hyperlinked to recordings of the papers.

Throughout the day, a picture of the past and present relationships between fascism and the medieval began to emerge. The power of academic narratives of the medieval to influence contemporary society, and the consequent responsibility of us as medievalists to be vigilant and mindful, was firmly apparent. However, many of the papers highlighted situations in which traditional academic paradigms offered no solution to medieval myths and their role in racisms, anti-semitisms, and contemporary white supremacy. In the question sessions at the end of each panel, the discussion often came back to the relationship between academia and broader public discourse, and questions over the construction of historical truth. If academic rigour entails dry, dense, and complicated research in constructing our narratives of the medieval past, but far right movements have the luxury of fiction and myth in their use of medieval narratives to legitimise racism, misogyny, and other bigotry, what can academics do but raise their voices and refute the claims of the far right? This perceived disjuncture between the responsibility of medievalists to oppose far right trends, and their actual ability to reach a broad social audience in order to do so, was met with several responses. Academic projects aimed at increasing access and engagement in the medieval, such as the public medievalist, were one. Counter-creation and humour, such as the demystification of the middle ages in Monty Python and the Holy Grail (informed by the writers’ experience studying Old and Middle English at university), were another. Lastly, an important and salient response recognised the limitations of academic discourse, and urged the importance of taking our opposition to far right medievalism to the places where it is aired: online spaces, media commentary, and - most importantly - the streets. 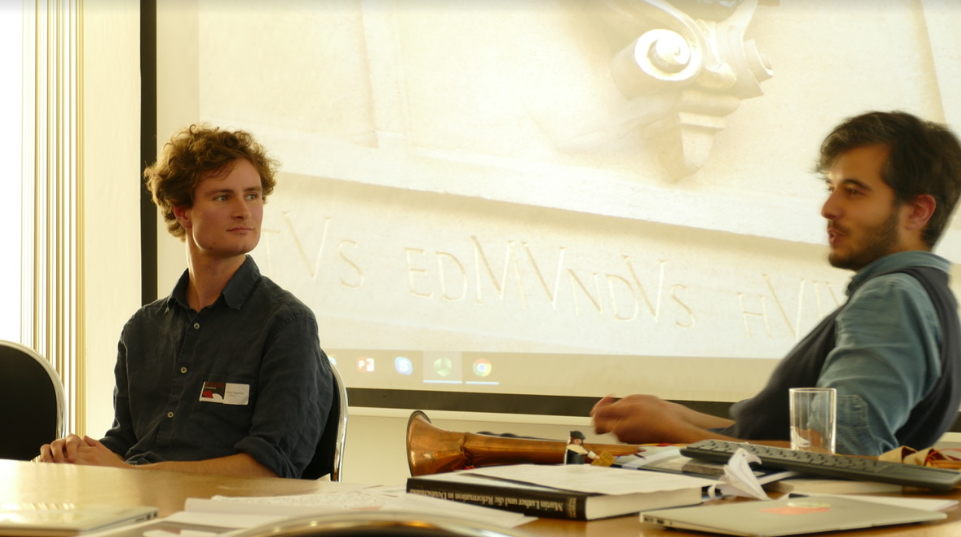 We had speakers from every academic stage from recent graduate to professor, and for some early career researchers, it was an excellent opportunity to present in an explicitly contemporary-focused and intellectually open space. It was important to us that the conference should be free to attend, and not limited to established academic researchers, as the casual delineation of academic from non-academic spaces is part of the issue at hand. It is important that this conference be a starting point for further discussion both inside and outside academic medieval studies, and we will be hosting recordings of the papers on the open-access oxtalks website to help facilitate this. We hope to organise more events in the future and develop models for truly open-access discussion that resists the cordoning-off of academic interests, and we hope to see our fellow medievalists resisting the far right in the pages of journals, in the press, and on the streets. 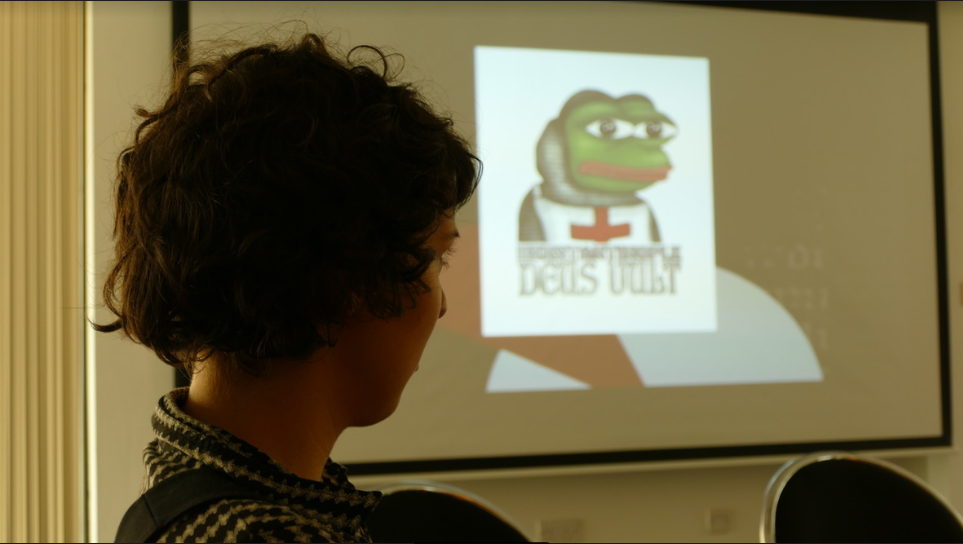 'Evaluating' means approving or condemning phenomena of the past based on our values today. In the context of this conference these values are those of an enlightened intellectual elite that stand against those of the far right. The former condemn racism, nationalism and fascism, which mostly originate in the 19th century, while the latter support ethnic or religious supremacy, xenophobia and violent behaviour which can be found throughout the ages. In my talk I want to discuss the scientific and methodological difficulties and opportunities of applying anachronistic terms to medieval phenomena that relate to the ideology of the far right.

Taking an interdisciplinary approach, this paper examines Western academic and political discourses of power in twentieth-century constructions of the late antique and early medieval past and asks questions relating to periodisation. The late antique and medieval paradigms have been challenged by scholars of ancient and medieval intellectual currents. For example, the First Millennium perspective (G. Fowden, Before and After Muhammad, Princeton 2014) redefines the foundations of the Western debate with Islam. I argue that the First Millennium as a multicultural/multiconfessional category can also help to shed light on developments in the emergence of the Greek and Latin civilizations after Antiquity. 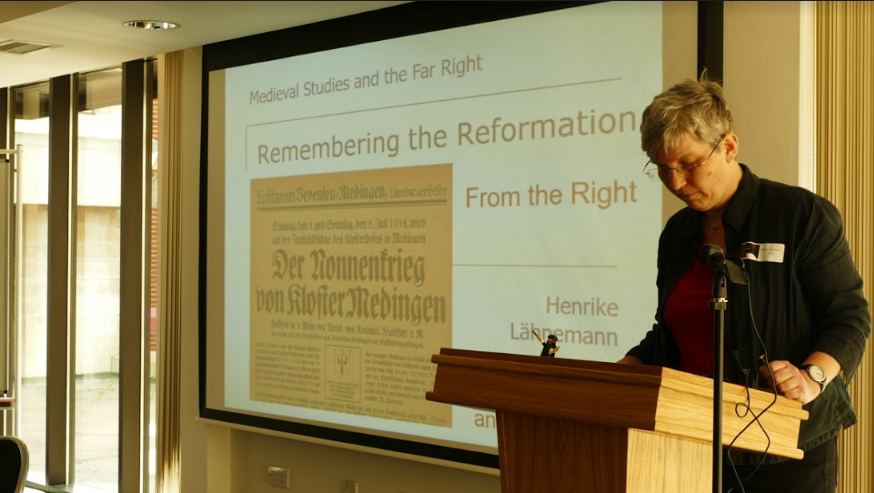 The quincentenary of the Reformation in 2017 has not only resulted in new critical readings of its leading figures but also stimulated research into memorial culture. There are few figures in German history, which have been claimed by such diverse groups as Martin Luther.  In my paper, I am looking at National Socialist pictures of Luther and then particularly at the celebrations in 1983. How can it be that at the same time as the medieval roots of Luther‘s thinking were discussed, German nationalists also reclaimed him as their prophet? 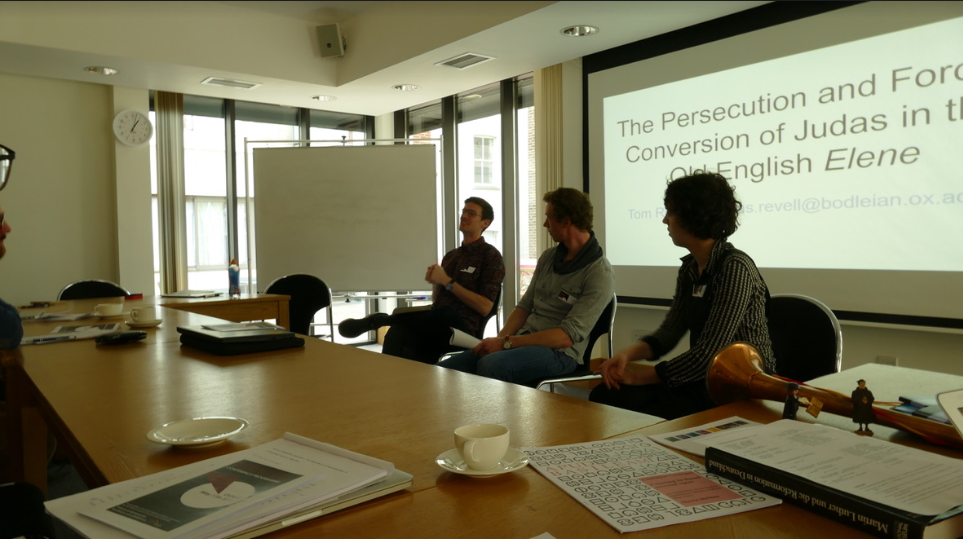 Cynewulf’s Elene is oft-analysed in awe of the poet’s subtle and intricate design, and critics have been prone to neglect the anti-Semitic violence and oppression written into the poem’s operations. My analysis reveals sustained and constitutive literary patterning depicting the persecution and forced conversion of Judas Cyriacus from Jew to Christian saint as heroically transcendent; his dynamic characterisation sanctions, in Anglo-Saxon terms, the narrative and semiological abuse committed against him. Interrogating rhetorical constructs of power involving ideological coercion, which we associate with totalitarian regimes of today, requires the self-awareness and sensitive critical distance I hope to display in my study.

Economy has been a crucial part of society for millennia. Therefore, the far right has to relate to economic thinking if they claim to provide a vision of what society should be like. For propagating their political ideologies, emotional and narrative approaches have proven much more effective than theoretical explanations. Examples starting from programmatic Nazi writings to 21st century politics can show how referring to the middle ages has served nationalist and far right literature, science, and political decision making in Germany until today, employing the myth of a less monetary and therefore righteous golden age.

Historical places provide a special potential to create identity as Pierre Nora had already pointed out by his concept of lieux de memoire. These places need a story to tell about the historical event while simultaneously incorporating it into the present context. Far right story tellers take part in this process by trying to establish their own (hi)story. The study case, the Castle of Montségur, provides a prototypical example of such a scenario. It can be shown, how several storytelling methods were used by the extreme right trying to incorporate Montségur into their own contexts.

In the early 1990s, parts of the Metal-Subculture underwent a drastic radicalization in its ideological and religious background. Earlier bands have already used esoteric, neo-pagan, satanist or fascist symbols and topoi in order to provoke with a demonstrative but carnivalesque ‘sympathy for the devil’. Bands like Burzum or Absurd however, started recurring to a ‘Germanic’ religion and culture which laid the basis for a racist and ethnopluralist blood and soil ideology. As the sources for Norse Mythology and the Scandinavian Early Middle Ages are relatively scarce, this new tradition is largely based on invention.

The 12th-century church of St Peter-in-the-East is on the site of St. Edmund Hall, and currently serves as the college library. During this break, there was the opportunity to tour the crypt of this Norman church with Professor Henrike Lähnemann. 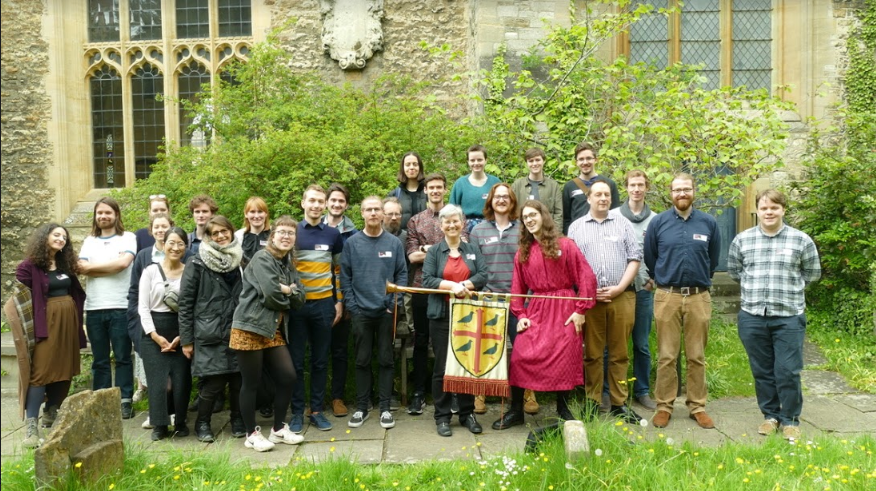 This paper argues that it is necessary but not sufficient to criticise the appropriation of medieval history by the far right. We must also criticise the persistent common-sense nationalism of mainstream historical writing. To elaborate on this point, the paper proceeds in two steps. First, it shows how the reification of ‘national’ and ‘ethnic’ categories persists in a self-contradictory fashion even within the critical strands of scholarship on collective identifications in the middle ages, despite by now routine appeals to constructivist methodologies. Second, it demonstrates how we can use the complexity of the ways in which ‘ethnic’/’national’ identifications were constructed in the Middle Ages to challenge, unsettle and eventually unmake our own problematic political and analytical categories.

This paper examines the claim that new materialist and object-oriented philosophies deploy a critique of modernity that has disquieting parallels with fascist politics. A fetishization of ‘the premodern’ afflicts the work of Graham Harman in particular, whose atomised and essentialist ontology overlaps with far-right discourse. Yet critical responses to Harman often recalibrate Enlightenment dogmas which are equally unsustainable. The new materialist task is thus to theorise a more nuanced relationship between the premodern and the modern: one that avoids Harman’s obscure essentialism while retaining his suspicion of the transcendental subject. I propose that reading medieval texts can help us to develop this philosophy.

Provoked by the alarming capacity for the far right to claim the preoccupations of both medieval studies and environmentalism as its own, this paper posits that both these convergences share common coordinates. I will argue that ‘nature’ and the construction of an antithesis to modernity play central and combined roles in the strategic reorganisation of historical experience through the categories of race and nation represented by fascism. Theorising the tradition of appeal to these themes, alongside the contemporary iterations of such gestures, I will attempt to pose an environmentalist and anti-fascist query as to the responsibilities of medieval studies in this consequential discursive situation. 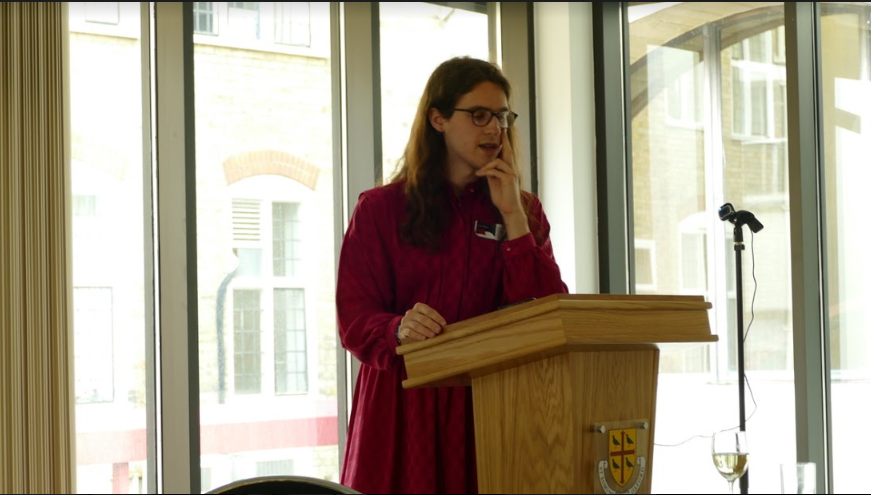 Drinks were provided by courtesy of the Principal of St Edmund Hall. 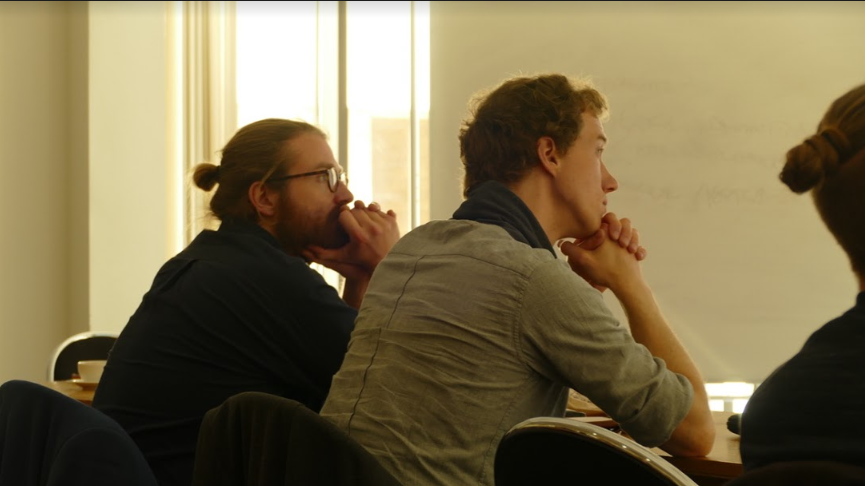 We would like to extend our thanks to Oxford Medieval Studies of The Oxford Research Centre in the Humanities (TORCH) for sponsoring the conference, to the Principal of St Edmund Hall for her kind hospitality and generosity in sponsoring our plenary refreshments, and to Professor Henrike Lähnemann for her technical assistance and podcasting. 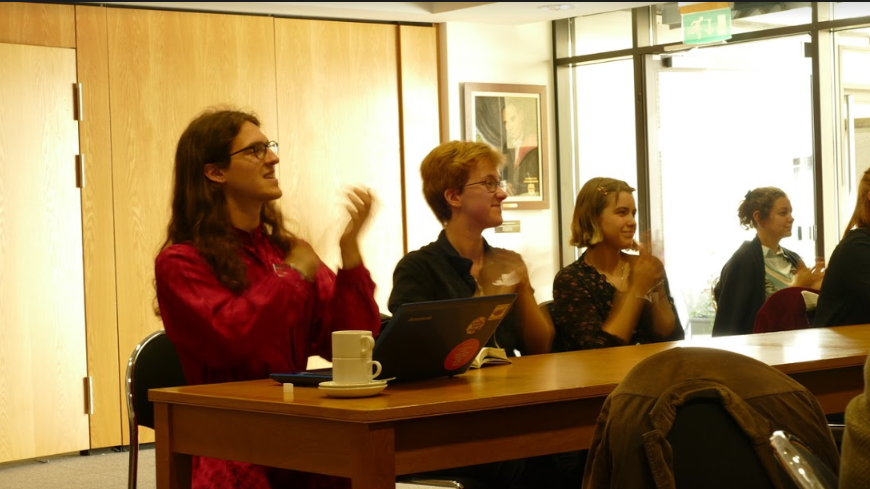 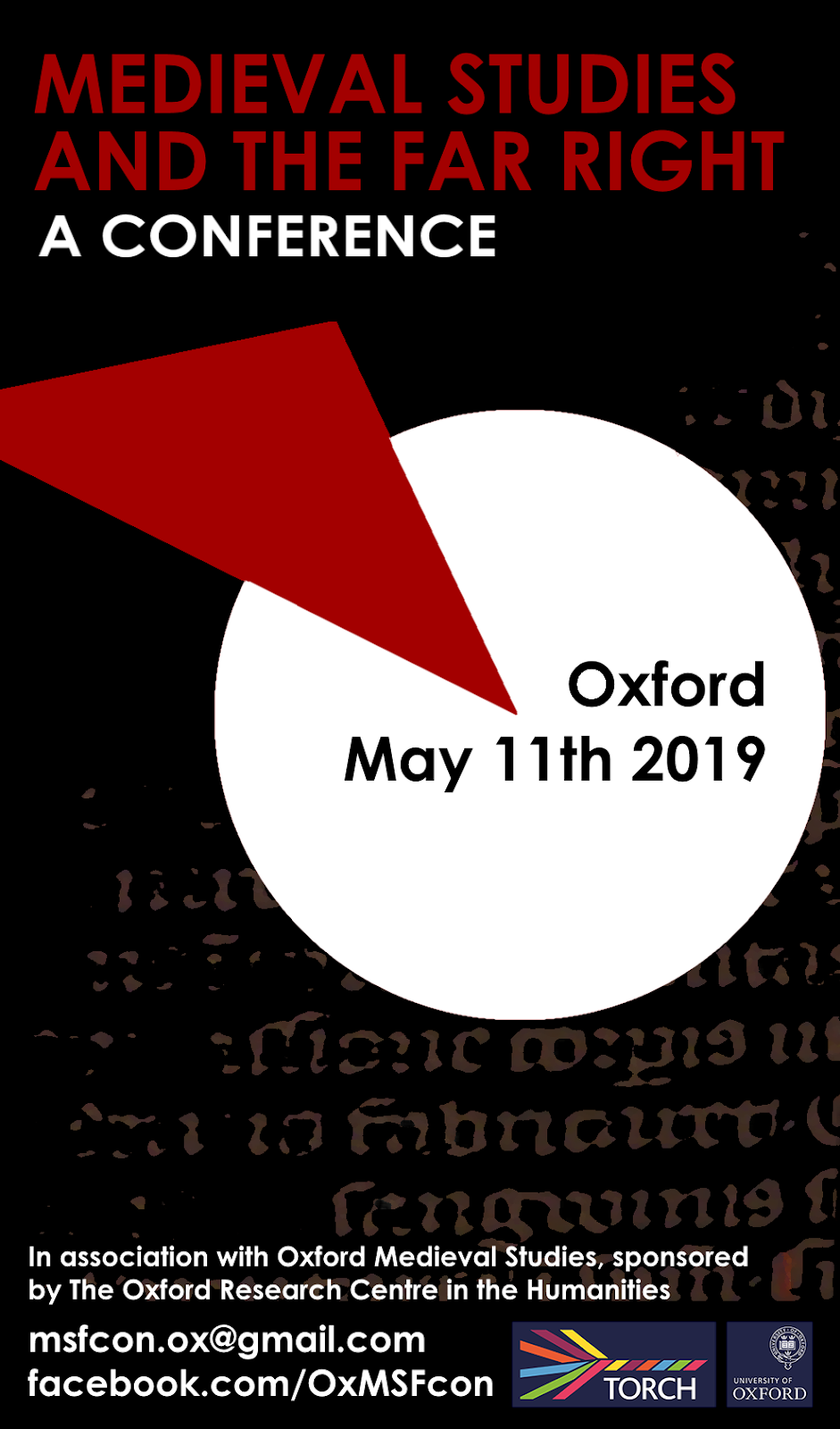 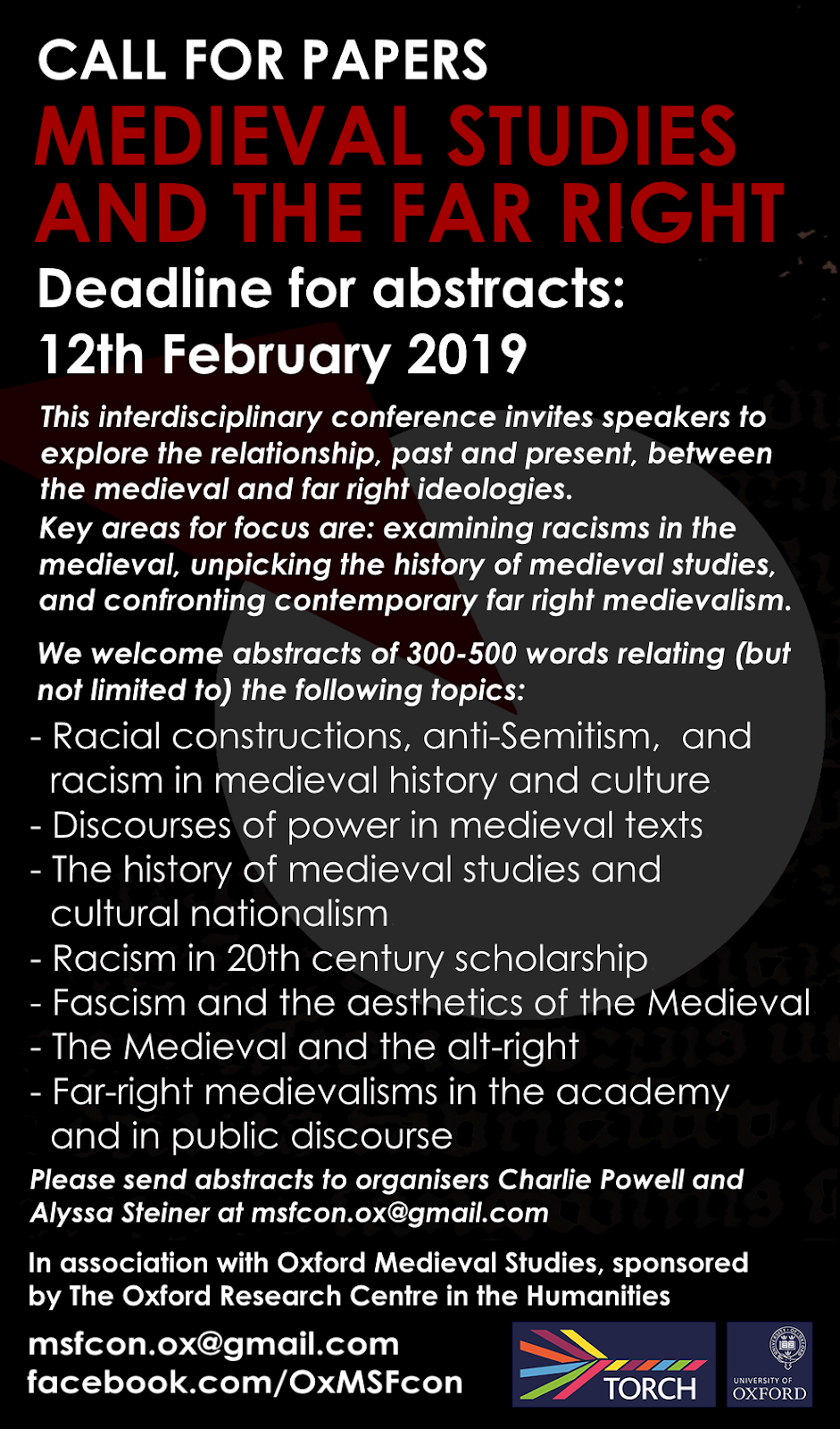