A Micro-Internship with the National Trust Partnership

At the end of Hilary Term 2020, I was fortunate enough to take part in a Micro-Internship with the National Trust Partnership. My five fellow interns and I were all assigned a different National Trust Property to research, based around the broader theme of ‘Home’. I chose Alfriston Clergy House in Polegate, the first ever property which the National Trust acquired. This was partly because my family moved to Eastbourne a few years ago; although I didn’t grow up in East Sussex, I knew it well enough that I was intrigued by the prospect of learning more about the history of the area, and particularly this historic site.

Of course, we had no idea that the UK would be affected by a global pandemic throughout the internship week. This drastically changed our working conditions and limited our access to many resources. I struggled at first – I could find hardly any secondary reading which referenced the Clergy House, and any which did exist was out of print or locked away in the now-closed Bodleian Libraries. On the first day of the internship I found and requested scans of books which appeared highly relevant to Alfriston, only to find that the Bodleian had suspended their Scan-and-Deliver service that same day.

Following very similar research patterns to many curators now working from home, I was thus forced to mainly rely upon census data and other online primary research resources. FindMyPast and Ancestry.co.uk were invaluable for this; I was able to trace the residents of the Clergy House, as well as focusing on a particular tenant family (the Witts), their residences and travel patterns during the mid-twentieth century. One difficulty was that the records were generally not consistent in their wording, and there were issues with the digitised transcription of the written documents. On multiple occasions, I had to scour the scanned image of the original census itself rather than rely upon the digitised file. For example, Alfriston Clergy House was referred to in various documents as “The Old Vicarage”, “The Old Clergy House”, or in one case as “The Old Vicar???”. Furthermore, because the tenants of the Clergy House did not live there full time, they often do not appear in census data. Birthdates could also be recorded incorrectly or vaguely (e.g. “born about 1910”, which sometimes made it difficult to discern whether multiple records I had uncovered were referring to the same person.

I first had the idea of focusing upon the Witts, and the context of the Second World War, when I stumbled across the 1939 Census Record of a Margaret Witt, Gillian Witt, Martha Havas/Beck, and an ‘??? O’Reilly’ living at the Clergy House. Through other records I deduced that ‘??? O’Reilly’ was Mary O’Reilly, an Irish children’s nurse. One of the most interesting parts of this project was that I was often unable to learn more about these residents than the basic facts of their lives; I certainly couldn’t find any writings from them, and had no way to access their thoughts about the Clergy House and whether they had considered it ‘home’. I found myself frequently thinking about the half of the Witt family who had ended up in Polegate in 1939 and speculating about how they must have felt. Margaret Witt was a wealthy Illinois woman – how did she feel, living away from her husband and son in a small English country village? How did Mary O’Reilly adjust to constantly travelling between London, New York and East Sussex, separated from her own family in Ireland during a global war? There is no way to know.

The lack of resources meant that it became vital to turn to more localised organisations and internet blogs to glean more information about the property and Alfriston. I contacted the Alfriston Historical Society, who were eager to offer all the knowledge they had on Alfriston during this period. I had originally envisaged Alfriston as a refuge for its tenants during the war, but the historical background on East Sussex they provided rapidly refuted this idea. The Historical Society noted that Ron Levett (now sadly deceased) had been passionate about relating his experiences of the war in Alfriston, and I was able to find the article he had written about his recollections on the BBC website. The article, coupled with the personal memories of the Historical Society members which they shared with me, gave me a much better idea of what Alfriston had truly been like – the frequent bombings, the stationing of Canadian soldiers, the operation of secret resistance units in the area, and the arrival of evacuees (before they were re-evacuated to Wales). Far from a sleepy countryside retreat, the formerly safe haven of Alfriston almost overnight became an area of extreme danger.

In all, I came out of the Micro-Internship with far more questions than I had answered. I wrote about the home in times of crisis – when a place associated with safety and family unity becomes transformed by danger, how does that affect our conceptions of ‘home’? Increasingly, as I wrote my report I mentally drew parallels with the current COVID-19 pandemic. Just as the Witts were divided in half during 1939, I and many others are also currently separated from our families. I am unable to return home to Eastbourne and my family for presumably quite some time, but it was a personal and almost comforting link to home to be able to explore a Polegate property. As of this moment, we are not only unable to access our usual resources and modes of working, but many of us also cannot return home for fear that to do so will bring danger to ourselves and our loved ones. Therefore, the theme of ‘home’ seems more relevant now than ever.

At the same time, this is a period which requires innovation. I and the other interns were still able to discuss our progress via video calls, and we were forced to step outside of the libraries to find unusual and sometimes unheard-of sites of research. Even given the current situation, I thoroughly enjoyed the experience. I think that the other interns all produced exceptional work, and I am so happy to have taken part – even though it required a lot of creative thinking and Google searches! I believe that when the National Trust launches their National Public Programme in 2021, they will certainly not be short of discussion topics regarding the home, whether that be past or present.

Haleigh Bellamy is studying for the MSt in Modern British History 1850-Present at the University of Oxford. She is interested in the intersections between oral history, memory and trauma, and is currently researching the development of British lesbian activism during the 1980s. Haleigh also hopes to pursue a career in the heritage sector after the completion of her degree. 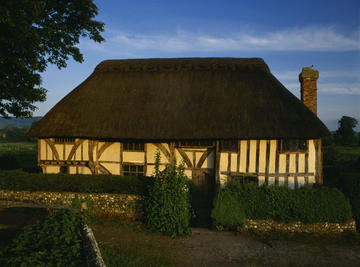