Census and Home: A Microinternship with the National Trust Partnership

For one week in December 2019, just after Michaelmas term concluded, I had the wonderful opportunity to remain at Oxford to complete a microinternship with the National Trust Partnership and three lovely fellow interns. This particular project was titled ‘Census and Home’ in light of the National Trust’s planned National Public Programme for 2021 with the theme of home and the anticipated release of new census data from last century. The participating National Trust properties included quite a range of country houses from across England: Attingham Park in Shropshire (to which I was assigned), Ickworth House in Suffolk, Wallington in Northumberland, and Ormesby Hall in North Yorkshire. And after deciding on our houses at a preliminary meeting, we soon got to work.

This microinternship based on census data was the first of its kind, and none of us involved were very sure what to expect. At the beginning, the research process was a bit of an adjustment as we tried to figure out how to access census records, find the correct civil parishes for our respective houses, and thereafter read the different records written in a variety of hands. Moreover, censuses will vary from decade to decade and the differences between the first and last censuses available to us – those in 1841 and 1911 – are quite striking. Much of the earlier census data were not as detailed, for example, neglecting to include a servant’s specific title or a person’s marital status. And it wasn’t until 1911 that residents filled in their own census information as we do today. Otherwise, an unknown third party would walk around the parish to record each household.

Despite (or perhaps because of) the irregularities present in the data, we were challenged to think more deeply about how to apply the census information to the histories of these houses – an exciting and truly ‘curatorial’ aspect of our research. With the theme of home ever present in my mind as I scoured the records and read more about Attingham Park, I’d like to review some of my own conclusions…

Completed in 1785, Attingham Park’s ‘heyday’ is considered to take place during the 2nd Lord Berwick’s inheritance in the 1790s. The census data, however, representing a bulk of the 19th century, revealed quite a different outlook on the late-Georgian house. The line of succession within the Noel-Hill family, often from elder brother to younger brother, or uncle to nephew, is not what a typical visitor to a National Trust property might imagine if, for them, a home implies a nuclear family unit. Instead, the census data rather underscores the homes of bachelors at Attingham Park, notably the 5th, 6th and 7th barons. It also challenges the modern notion of a large family-oriented, Victorian home with identifiable parental figures and generational strata. Instead, the data turns attention to the servants who maintained the property, though their turnover rates were high from decade to decade. Often a small group would be stationed at the house if the baron was away, and they would be the only residents listed at Attingham.

Even though each intern essentially conducted separate research on a different house, we spent long lunch meetings comparing and discussing our findings, noting the rewards and challenges that historic censuses bring to our modern conceptions of home. Aside from such absorbing research, the group took a mid-week trip to visit to Heelis, the National Trust’s headquarters in Swindon too. It was a lovely opportunity to bring some perspective to our microinternship and the overall week-long experience was immensely rewarding. By the end of the week, we had a wealth of material to share and I was not the only one eager to unpack these complex family (and house) histories with new data and an attentive audience – nor will I be the last thanks to the National Trust Partnership!

Amanda R. Westcott is a current graduate student at the University of Oxford, completing an MSt in eighteenth-century British and European history. She is interested in British country houses during this period, and her Master's research will focus on the Harcourt family at Nuneham House, Oxfordshire, as a case study. Amanda is also an active participant in TORCH's Heritage Pathway Programme and aims to pursue a career in the heritage sector after her studies. She tweets https://twitter.com/ar_westcott. 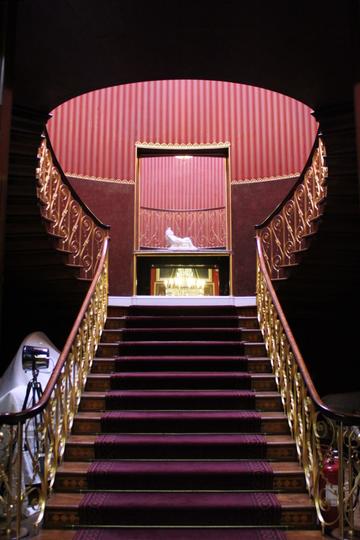