Chloe is a Greek name that emerges late and is never common; the Lexicon of Greek Personal Names lists just 21 examples, most of which come from Pompeii or elsewhere in southern Italy, none at all from mainland Greece; there are also 38 from the city of Rome.  The first firmly datable appearance comes in the Odes of Horace (1.23, and often), so roughly in the 20s BC.  Later a Chloe is heroine of Longus’ mildly salacious (whence much appreciated by illustrators) pastoral novel Daphnis and Chloe, on the last page of which the young couple finally discover how sex is done.  By origin, chloe is  a common noun (χλόη) meaning ‘green shoots’.  I would like to link it with that first re-emergence of perennial plants in the spring that brings joy to any gardener’s heart, but for Greeks it will have referred primarily to barley or wheat which germinates when sown in autumn, but then ‘stays in the green’ through the winter until reviving and putting up stems in the spring.  The goddess of corn, Demeter, accordingly bore it as an epithet, Demeter chloe (Greeks lacked the distinction between small and capital letters; had they had it, they would presumably have written chloe here with a small letter, as I have done, to indicate a thing).

Daphnis, as in Daphnis and Chloe, is a male name, never apparently take up in modern times.  Daphne, however, turns out to have a  history very similar to Chloe’s , except that she emerges as a name even later but proves a little more popular (32 examples in the Lexicon, but a whopping 109 in Rome); before that she too had been a plant, the laurel.  In myth, girls pursued by lusty gods turn into plants; in onomastics, plants can turn into girls.  The change seems to have happened outside Greece, among slaves and freedwomen of Greek origin in southern Italy and Rome; the names doubtless then passed to Italian and Roman women, and there was some flowback to Greece: a Christian Chloe appears, a little unexpectedly, in Paul’s Epistle to the Corinthians. Withycombe’s Oxford Dictionary of English Christian Names traces the emergence of Chloe as an English name in the 17th c. to that passage of St Paul, but Horace must surely also have had an influence on its subsequent popularity.  As for Daphne, one learns with astonishment from Charlotte Mary Yonge, famous in her day as a novelist but also author of a pioneering study of Christian names, that at the time of writing (1863) it was used exclusively for dogs.  Daphne is one of the rather rare Greek names that entered English naming neither via the Bible nor a saint; that fact may explain the canine detour.  Daphne had evidently resumed human form by the time Daphne du Maurier was born in 1907, but I have no clue at the moment as to what triggered this last metamorphosis. 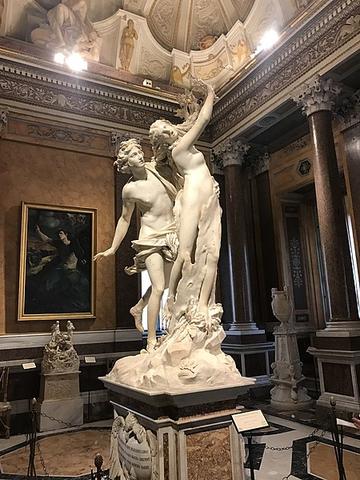