International choreographer Kim Brandstrup and two renowned dancers, Laurel Dalley Smith and Liam Riddick developed the dance-piece “Cupid and Psyche” during a week-long summer residency in the Jacqueline du Pré Music Building at St Hilda’s College, Oxford. This dance, to a newly commissioned score by Edmund Finnis (played by Sara Trickey, violin, and Ivana Gavric, piano) was to be performed as part of the “Dancing with Apollo” project, originally devised by violinist Sara Trickey. The project was curated by Marina Warner as dramaturg, whose writings on myth inspired the work.

It was extraordinary to witness this period of dance-making – an intense and rewarding five days in which creativity flowed at a rapid pace in the intimate setting and peace of the JdP auditorium. From the moment Brandstrup and the dancers began working together it was clear there was an unspoken “connection” between them (they’d never before worked together) – literally a “kinaesthetic” empathy flowed around the room as the dance very rapidly emerged from the confluence of ideas and conversations that had gone into developing the project. Marina’s words could be felt echoing through the process encapsulating “Cupid and Psyche experiencing this inward sight, this seeing feelingly [like the blinded Gloucester], and the lamp that Psyche lights corresponding to waking up: reality makes everything disappear”. Kim does not “translate” story into dance literally, but hints and indicates mood with a gesture, a turn of the head, a leap, an intertwining of bodies. The dancers responded sensitively to his subtle choreographic method. His profound musicality picked up on the nuances of arc and structure of Edmund’s score, communicating quietly the inflections of drama as the piece seemed to be assembled seamlessly over the week. Kim never gives dancers instructions to “do the steps” but rather suggests the form, teasing out the plasticity, lyricism, and sometimes the natural quirkiness of the dancers’ movements, complementing the exquisite phrasing, dynamics and flow of the music.

The residency left plenty of time for discussion over coffee, supper - of the implications and afterlives of the Cupid and Psyche myth, and Kim identified one strangely complementary dance piece from early twentieth-century dance history that had emerged, not in a direct rendering of the myth, but in the fin de siècle mood of Le Spectre de la rose – a 1911 piece by Michel Fokine (to a poem by Théophile Gautier and music by Weber) for Russian dancers Nijinsky and Karsavina. This famous pas de deux about a young girl’s dream of dancing with the spirit of the rose (the other-worldly Nijinsky) expresses choreographically the phenomenon of touching and feeling without seeing. During rehearsal Kim had talked to Laurel about how the girl in the 1911 ballet moved up to the darkened window, reaching out, feeling the presence of the rose's spirit, the smell, and then, as she falls asleep, dreaming, the touch and breath of the spectre (Nijinsky) on her body drawing her into the dance. The ambiguity of the girl’s erotic awakening seemed to match Marina’s words about the unknowability of Psyche. In the ballet the girl is transported by the spirit of the rose, caressed, embraced, breathing the scent, bouréeing unseeing across the stage drawn by the spirit. Spectre is essentially romantic and the girl wakes up fulfilled by fond memories of the experience. Kim’s piece never tips over into sentimentality, however. Neither does Spectre entirely encompass the dark side of the Cupid and Psyche story – yet it provides an echo - the dark hole of the window of the original Bakst set of the ballet - through which Nijinsky made his famous leap into the nothing, conjurs that unsettling hiatus, that unknowability that lies also at the heart of the Cupid & Psyche myth.

The most memorable moment of the week came when the musicians and composer joined the dancers in the hall (previously the choreography had been developed to a recorded version of the score). The conversations all settled into the excitement of revealing Kim’s piece danced for the first time to live music. We could feel the collective gathering of the intellectual aspect of the project - Marina’s interpretations of the myth, Stephen Harrison’s work on Cupid and Psyche (the myth at the heart of the early modern quarrel between the ancients and the moderns), and now Brandstrup’s choreography embodied the myth’s concern with touch, breath, feeling unseeingly, vision, and lack of foresight. The residency had suddenly revealed the cultural expression of that longing for physical contact and release from isolation that has so powerfully marked the experience of the pandemic. 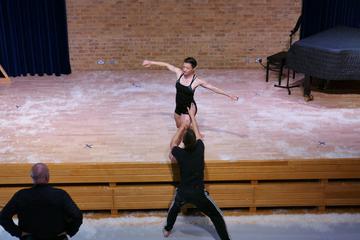 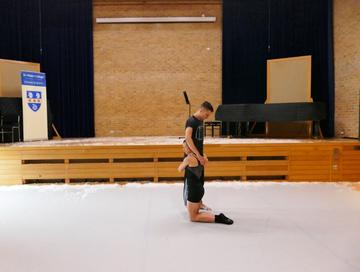 Watch about the residency here: 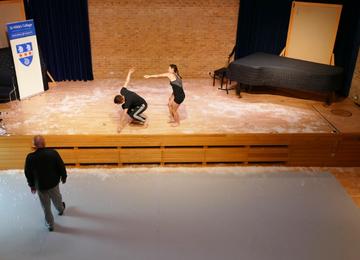