Dreaming Ideas into the World: How Science, Technology, and Imagination Create Modernity

If Dan’s presentation explored the conditions in which truly creative ideas can emerge––despite the difficulties of context and our own cognitive and collective biases––my own revolved around the role of science and technology in enacting them at scale.

Out of many accounts of the imagination as a future-thinking and future-making practice, I presented Sheila Jasanoff’s theory of the socio-technical imaginary, as she outlines it in her 2015 book Dreamscapes of Modernity. Her formulation emerges from the sparse overlap between anthropology, political science, and cultural studies’ accounts of imaginaries (think of Anderson’s Imagined Communities (1983) as a key precursor) and Science and Technology Studies (STS) case studies of socio-technical systems. The latter, too promiscuous in its networked symmetries, lacked a hook into questions of power; the former tended to elide the critical role of technology in supporting and extending visions across time and space. In Dreamscapes, Jasanoff’s argument is that collectives, morality, materiality, knowledge, technologies, practices, beliefs, affect, power dynamics, and landscapes must all fit into the frame; they are all constitutive parts of the process by which a single idea transcends its origins to create the future. So the frame expands.

Socio-technical imaginaries, then, are visions of desirable futures with a set of conditions. They are upheld by collectives, stabilised by institutions, and publicly performed. And, crucially, they are “animated by shared understandings of forms of social life and social order attainable through, and supportive of, advances in science and technology” (p.4). Through this lens, imagination is no longer a private, mentalist exercise. It a social practice, and it both shapes and is shaped by the landscape of technology and scientific knowledge of which the doer of imagination is a part.

During the workshop, I presented the edge case of Cecil Rhodes, whose vision at 24 – the “idea gleaming and dancing before one’s eyes”, “bringing of the whole uncivilized world under British rule (…) for the making the Anglo-Saxon race but one Empire” – turned into a punishing century of racially segregated industrialisation for the south African region. Jasanoff’s imaginaries account for both the trajectory and the scope of Rhodes’ future-making. Trajectory-wise, the idea engenders the result through its embedding into cultures, institutions, and the land through practice, the countering of resistance, and the extending of its logics through space; vertically and horizontally, at all scales. Scope-wise, a socio-technical account must include the innovative engineering Rhodes deployed to make his mines more productive, and the scientific knowledge which supported it; the railways extended to source labour from the region; the workers’ compounds built to segregate black workers from white and keep both pools at hand and easily monitored; and the racially-discriminatory policies required to orchestrate and institutionalise the domination of the land and its population. As Jasanoff concludes of William Storey’s account of Rhodes’ world-making (Dreamscapes, chapter 2):

His was a grounded, physical vision of progress, one that could not have come into being without skills, labour, connections, money, and machines—and the subjugation of bodies that worked to minds that planned the digging of pits, the laying of rails, and the ruling of continents (p. 336).

Socio-technical imaginaries thus reveal how, through the imagination work of social actors, “science and technology become enmeshed in performing and producing diverse visions of the collective good, at expanding scales of governance from communities to nation-states to the planet” (p.11).

Rhodes’ aspiration for the supremacy of the “British race” attests to the heterogeneity of these visions of justice and public good. Although one imaginary can dominate under particular conditions, there are always alternatives; other ways of imagining, relating, and (in Haraway’s terminology) worlding, emerging from similar contexts and sets of recourses. Take the Internet: a site within which the instrumental logics of platform capitalism compete with the utopian ideals of commons-based peer production on Web 2.0; or the conflicting, often contradictory visions for AI-inflected futures.

As useful as socio-technical imaginaries are in tracing the origins and deployment of different realities, once these are mapped, ongoing questions take on additional heft. They become ethical and normative. How, then, do we – having assembled a ‘we’ to speak from – take position between competing claims to social and natural order? How can we cope with the inconsistencies and the costs of this process? How can we live well with difference?

Anne Ploin is a co-convenor of the Futures Thinking Network. She researches the intersection between human and machine creativity at the Oxford Internet Institute. 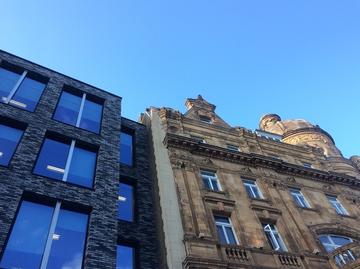