Curatorial Research with the Charleston Trust

Grace took part in a one-week curatorial research micro-internship in March 2021, hosted by the University of Oxford Heritage Partnerships team in collaboration with Charleston Trust staff.

In February 1920, Duncan Grant’s first solo exhibition opened at the Paterson-Carfax Gallery in Old Bond Street, London to a varied, but largely receptive public. Following a myriad of group endeavours representing the likes of the Omega Workshops and the London Group, the Carfax exhibition served as a turning point in Grant’s career, offering him the opportunity to be considered as an individual, beyond the boundaries, nevertheless important, of his associations with his contemporaries. Indeed, this show of 1920 was pivotal in shaping our own impression today of Grant’s status as an especially esteemed British artist.

In celebration of the centenary of the exhibition, the curators at the Charleston Trust, the former home and artistic haven of Grant and fellow artist, Bloomsbury Group member, friend, and the list goes on, Vanessa Bell, and the setting where the majority of the artworks shown at the Carfax were created, began preparation for their own exhibition of the works of Grant’s first presented in 1920. Unfortunately, having its plans thwarted by the various lockdowns and restrictions of the coronavirus pandemic, the Charleston exhibition was unable to take place in 2020 to commemorate the one-hundredth anniversary of the original show but has since been rescheduled, now set to be unveiled in the Autumn of this year.

Across a span of five days in the Spring, I undertook a remote curatorial research micro-internship in support of the preparation for the ‘Duncan Grant 1920’ exhibition to be held at Charleston. Using a range of online resources and databases, I worked in collaboration with another student at the university to uncover a wealth of material relating to the original exhibition. These ranged from newspaper reviews of the show to its relation to other exhibitions in public and commercial galleries in 1920s London, to later appraisals of the exhibited paintings in their subsequent appearances in galleries and museums from their earliest exposition up until the present day.

The initial days of the placement were spent trawling through online newspaper archives, scouring for reviews and mentions in 1920 of Duncan Grant and his Paterson-Carfax solo exhibition, in order to gauge a picture of its reception and impact. This endeavour proved especially fruitful, I managed to find a broad scope of contrasting opinions of those that visited the exhibition, from Grant’s fellow Bloomsbury Group members Roger Fry and Clive Bell applauding its ingenuity, to journalists of the Times and Daily Telegraph papers finding his efforts at a modern manner of painting puzzling at best. In my view, the most interesting finding in these newspaper archives was an article published in the Nottingham Evening Post, written for its July 6th issue, months later than the February Grant exhibition at the Carfax Gallery. At first, the article pictured, entitled ‘Nottm. M.P’s Pictures’, did not seem particularly relevant to Grant’s solo exhibition, having been published both geographically and temporally beyond its expected remit. The text is an advertisement for an auction of the art collection of the late Nottingham M.P. Lord Hy. Bentick, which included works by Duncan Grant and various other artists. While the article is very short and brief, listing artists' names in quick succession, it lingers upon Grant and refers to an exhibition (which I concluded was, indeed, the Carfax show) that was instrumental in changing contemporary receptions of modern art in Britain. While each article that directly reviewed the exhibition was illuminating for my research in estimating its immediate influence, this particular article was such an important find, due to its effect in situating Grant and his solo exhibition more broadly in the time following its unveiling, hinting towards the reputation of the artist that was only to grow and grow.

Beyond this deep dive into historical newspaper archives (an unfamiliar approach for me before this project, which I intend to carry into my future research practice), I spent the week looking into other primary resources, as well as looking to more recently published secondary texts and contemporary webpages and articles. Throughout the week, we, the interns, met with our supervisors to discuss our research findings and were also given the occasion to discuss careers and projects in the heritage sector more broadly. The week provided me with an invaluable insight into both the potential opportunities available within the field and into the specific operations of such careers themselves.

As mentioned above, the ‘Duncan Grant 1920’ exhibition is due to open at Charleston in the Autumn. I am excited to see to what extent traces of the research uncovered in this internship will appear in the exhibition and its catalogue. While the online nature of this project was no barrier to my engagement and experience, I can hardly wait to see the exhibition come to life, and finally encounter the artworks that I spent a week in Spring remotely admiring, in person.

Grace Page is a second-year History of Art undergraduate at St John’s College. She is currently working on a project as a part of her degree with the Duncan Grant Collection held at St Peter’s College. 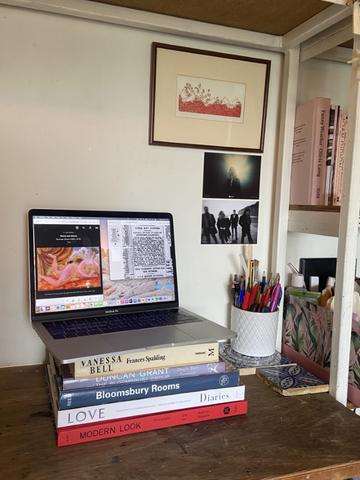