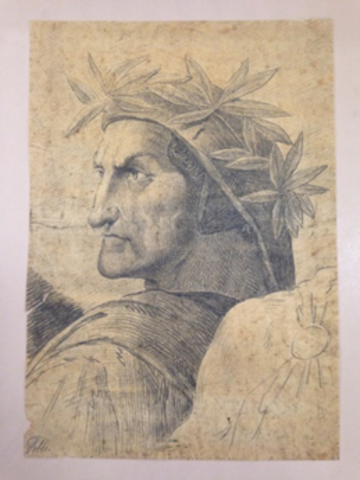 Half-way along our journey to life’s end

I found myself astray in a dark wood,

Since the right way was nowhere to be found.

2021 is the year of Dante, the author of the Divine Comedy who died 700 years ago in 1321. The poem which records his vision of Hell, Purgatory and Paradise remains one of the peaks of world literature, and all cultures have recorded its influence. This pair of exhibitions forms part of Oxford’s celebration of the man known universally as ‘the supreme poet’. Oxford has long been a particular home to the study of Dante, and the exhibitions will put on public view unfamiliar treasures from University and College collections.

The display at the Bodleian Library reflects the changing material form of the Comedy as a book. The reader’s experience has been profoundly affected by the changing format and illustrations of the text. This small exhibition opens with one of the finest early manuscripts of the poem, which is accompanied by illuminations of the story, and closes with cartoon and manga versions from very modern times.

The theme of the larger Ashmolean display is celebrity or fame. The subject is central to Dante’s argument, and highly pertinent to our own society. The huge cast of unforgettable characters whom Dante – and his reader – encounters in the three realms of the other world is a gallery of life-models. Should we strive to be like this person – or that other one? By taking for his examples many figures from his own time, Dante gave lasting fame to individuals about whom we would otherwise know nothing. And as the author of a bestseller, Dante himself – a person of no particular status – became famous in his lifetime, and has since become the object of a cult which at times has resembled that of the saints in Catholic culture.

Highlights of the Ashmolean exhibition include the ‘death-mask’ of Dante and a Renaissance group-portrait of Tuscan poets over whom Dante presides. The show features notable illustrators of the famous characters of the Comedy, including William Blake, Auguste Rodin, Salvador Dalí and a number of modern artists. One of these, Monika Beisner, is the creator of intensely vivid images for which she drew inspiration from medieval manuscripts.

In addition, the artist-robot Ai-Da is making new work in response to Dante which will appear in the Ashmolean display. This involvement of Artificial Intelligence is a reflection on the future of culture and the humanities in the age of intelligent computers. Ai-Da’s visual work is an original engagement with the Comedy which also invites us to consider what is distinctive about human creativity.

The exhibitions will be accompanied by a book written by their curator: Gervase Rosser, Dante: The Invention of Celebrity, Ashmolean Publications.

Professor Rosser comments that: 'The Comedy of Dante remains a unique and astonishing book: once one has read it, the world is not the same. This 700th anniversary is a wonderful opportunity to celebrate Oxford’s old and enduring interest in Dante. These twinned exhibitions will showcase visual responses to the poem and its author from the fourteenth century to the present.’

Further details of the exhibitions can be found below. Part of the Dante in Oxford 2021 project, supported by the Humanities Cultural Programme.

Dante: The Invention of Celebrity

The Divine Comedy: From Manuscript to Manga