I also gathered together professional musicians, collectors and researchers to record three episodes of a podcast – Folk Tunes and Englishness – in which I asked what makes music ‘English’, and whether this is a useful category today. Each guest also contributed recordings of their own music and demos of musical styles and features mentioned in the discussion.

The three episodes are:

You can also hear the three episodes of the series on 'anchor.fm'. Do share, subscribe, rate and review the podcast, as it will help others to find it. If you have any comments you can either post on Twitter using the hashtag #FolkTunesAndEnglishness and tagging @littleamiss and @TORCHOxford or get in touch with Alice directly via alice.little@music.ox.ac.uk.

Here are three reflections on the process that you won’t hear in the audio:

First, my theme in this series was very clearly Englishness, but I was struck by how often the musicians drifted into discussing historical accuracy. This is clearly a subject they are asked to comment on much more often! When looking at any tune, from the eighteenth century or today, from England or elsewhere, we have to remember that any stylistic interpretation we bring to a performance is just that – interpretation.

Second, I went back and forth a great deal about how to include issues of nationalism and race in this series. I felt it wouldn’t be right to talk about ‘Englishness’ without addressing head-on the issues that often come with dividing things or people into categories. These topics are discussed in episode 3, where we cover nationalism and regionalism (Scottish independence and Brexit), and issues of race in English folk music.

Finally, some practical things: back in 2020 I attended TORCH’s training on how to make a podcast, which was invaluable in helping me understand best practice, and also in terms of tips, from what sort of microphone to use to how to use Audacity’s envelope tool to blend music behind speech – this latter tip I made practical use of in making the trailer for the series. For production of the three full episodes, I worked with Birdlime Media to collate, edit and professionally produce the sound files, and I’m so glad I did as it took a load off my shoulders. I was also delighted to be able to commission cover artwork from Simon Reid for the podcast. 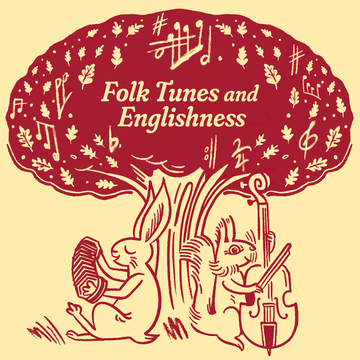