The curatorial research project with the National Trust gave me the fascinating opportunity to learn about research at an institution, which is not the university. During my micro-internship, I looked at the collection of ‘curiosities’ at Nostell Priory. Charles Winn, who inherited the property in 1817, found a passion in collecting not only antiques, furniture, and paintings, but also various objects from distant parts of the world. At that time they were called ‘exotic’ or ‘curiosities’ and probably they were shown to particularly curious guests. Most of them left England again in 1912; they were sent by Winn’s grandson to New Zealand, where they were included in the ethnographic museum, now Te Papa. Scouring the historical sources, one can hypothesize about the routes these objects took before arriving at Nostell Priory. Thus, the English country house and Charles Winn are linked to a number of global histories that span from the South Seas to the Arctic, from Hawaii to Greenland.

A feather helmet and cloak tell the story of Captain James Cook’s arrival in Hawaii, where they were presented to him as gifts by King Kalani’ōpu’u. The hospitality didn’t last long, however, after Cook desecrated a burial site and kidnapped the king to redeem an apparently stolen boat. The extremely valuable ceremonial garments left Hawaii without Captain Cook, who died in the fracas. They thus also testify to the arrogance of European adventurers and their violent clash with the indigenous population. Today, the objects are in the Bishop Museum in Honolulu, Hawaii, where they tell yet another story: that of the old Hawaiian Kingdoms before the island was annexed by the United States.

From the Austral Islands, several paddles came into Winn’s possession. Well into the 20th century, travellers and ethnologists speculated about the function of these elaborately decorated paddles. Did they symbolize gods and were used in religious rituals? Were they meant to commemorate deceased ancestors? The only thing that was clear was that they could not be used for boating – their dimensions were not right for that. Recent research has shown that the paddles were in fact probably souvenirs made by the inhabitants of Tubuai for trade with travellers. In their fantasy image of ‘savage’ societies, Europeans frantically tried to find a cultic or ritual explanation for everything – even for matters that were in reality very mundane. Today, the paddles are among the most valuable documents of Tubuai culture and at the same time tell of the many misunderstandings of an imaginary ethnography.

During the exploration of the Northwest Passage, Europeans and Inughuit (Avanersuarmiut, or ‘Polar Inuit’) met for the first time. A parka from Winn’s collection, now kept in the British Museum, bears witness to this. In a voyage report by Captain William Edward Parry, there is a picture of an Inughuit woman, Kallie, wearing a caribou-skin parka with the same ornaments. The picture was painted by Henry Parkyns Hoppner, a friend of Winn’s who may have brought a parka with him to England. Using the coordinates in Ross’s report, I was able to determine where Kallie, and therefore perhaps the garment, might have come from - Niaqornat in West Greenland.

Even though today we have rightly abandoned the notion of ‘curiosities’, it is precisely these objects that have made me curious – not for their supposed ‘exoticism’, but rather because of the intertwined stories of indigenous cultures, the age of the ‘discoveries’ and European colonial ideology. Following the traces of gifts, trade items and looted goods, allows to retell global histories, with all the ambivalences that come with it.

Andreas is a second-year doctoral student in Modern Languages at Oxford, focussing on the history of the avant-garde and anthropology circa 1900. Before starting his DPhil, he studied German Literature, Political Science, Philosophy and Ethnology in Regensburg, Berlin and Oxford.

Find out more about the TORCH Heritage Programme here. 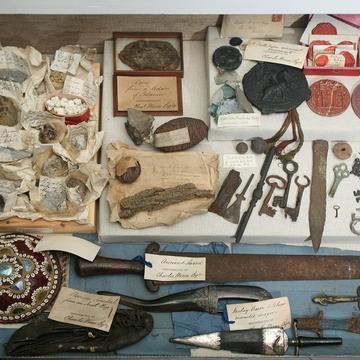 Charles Winn’s collection of ‘curiosities’ today – the objects mentioned in the text have left the collection in 1912. © National Trust/Nettie Cook