Home Away From Home

A Curatorial Micro-Internship with the National Trust Partnership

I scurried away from Oxford days before Hilary term officially ended, with rumours about the spread of Covid-19 throughout colleges becoming more weighted and anxiety-inducing. I did not anticipate soon being on lockdown, I did not think that the virus would make its way into my home village, and I could not have known that Trinity Term would move online, with all the things I had been looking forward to – mainly studying outside in my college gardens – no longer on the horizon. Upon lockdown, I thought forward to the week I was supposed to be spending in Oxford for a Microinternship with the National Trust Partnership, along with six other interns, under the guidance of Alice Purkiss, Hanna Smyth, and Helen Antrobus. We had met once to discuss the project and become acquainted, but by the end of term it felt unlikely that we would get a chance to participate. Thankfully, the Microinternship was re-modelled, not cancelled. We were offered the chance to undertake our research from home, which ironically would give us a more authentic experience, as curators often do not have the chance to peruse libraries and physical archives, most commonly tackling online resources.

In anticipation of the 2021 census, the National Trust has been exploring literal and abstract meanings of ‘home’. For our week-long project titled ‘Census & Home’, we were tasked to investigate where the themes of ‘loss’, ‘family’, or ‘at home in nature’ applied most strongly within the National Trust, how they could be applied to a narrative (such as the life of a person, or collective lives of people), and how the National Trust can best reflect these stories. From the list of properties we were given, I chose to research the Birmingham Back-to-Backs (Court 15), the last of its kind in the city. I quickly fell in love with this property because of how imbued with social history it is, back-to-backs being a popular form of housing for the working-class in the early nineteenth century. For my project, I focused on the theme of ‘family’ and sought to discover whether a sense of community could exist in these types of housing, with their shared courts containing privies and a wash house.

After becoming quite efficient with findmypast.com and gleaming information from restricted Google Books, as well as becoming an official member of the Birmingham History Forum community (I am what they call a “brummie babby”), I was able to construct profiles for three families: the Mitchell’s, the Levy’s, and the Oldfield’s. Looking at their lives, I established what possibilities for community-building there could have been whilst living in Court 15. For example, the thin walls meant that residents had a distinct lack of privacy, making family matters everyone’s business. Children grew up in the court together, in some cases for over a decade, playing games in the communal space. Court 15 was home to many tradesmen and tradeswomen with their properties frequently being turned part-workshop and apprentices becoming lodgers. As a result of their presence, artisanal skills and other resources were shared throughout the Court. Moreover, courts were favourable to live in for communities with shared languages, as Chris Upton highlights in his book Living Back-to-Back, and the area surrounding Hurst Street in particular became a centre for Birmingham’s Jewish community. Thus community-building in back-to-back living was an evident possibility, and through drawing upon various examples and broader narratives, it is clear that Court 15 was a micro-society in its own right.

Though I encountered various problems during my research, the main one being the house numbering system, the limited access to resources turned out to be more helpful than detrimental. For one, the little amount of traces left behind by the residents of Court 15 made it almost impossible to form an idea of their day-to-day existences and personal experiences, yet this in itself speaks volumes about their lives. Preoccupied with work, children, housekeeping, and financial struggles, the working-class often had no time and little stimulus to diarise their days. The limited access to resources also forced me to be more creative in where I found my information, which led me to the online Birmingham History Forum. Through this platform I engaged with locals who were eager to share their back-to-back living experiences, demonstrating that by only extending a line we can elicit rich stories which, taking possibilities for exaggeration and the problematic nature of memory into account, can improve our research. The importance of local voices has been highlighted to me, and I can only encourage greater engagement with them to further inform and deepen our understanding, for we can more efficiently frame a property for the public when we have connected with the public.

Working for the National Trust Partnership has been a brilliant experience, and especially unique whilst the heritage world is being reconceptualised to become more remotely accessible. The efforts of Alice, Hanna, and Helen are truly appreciated. I not only enjoyed my project, but I was deeply grateful for an opportune distraction in these anxious times which cannot be ignored. The peculiarity of researching distant families whilst isolating with my own did not escape my attention. I am now writing whilst Trinity Term in Oxford becomes increasingly improbable, and home as an abstract feeling feels particularly prevalent as the prospect of returning to the one I had created in my friends grows distant.

Abigail S. Casson is currently in her second year studying History at the University of Oxford. She is most interested in social tensions and the clash of ideologies in changing cultural contexts, particularly in 1960s America. Having previously volunteered with the National Trust, and at present with Oxford's GLAM, she has developed a love for living history and hopes to pursue a career in it. She tweets @abbiecasson. 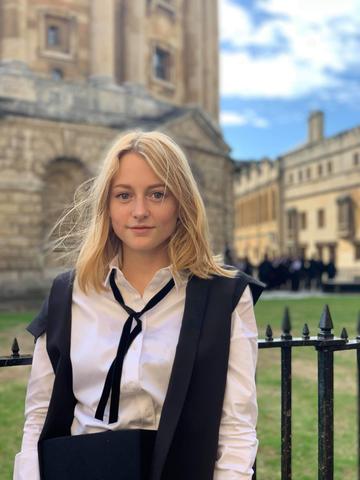