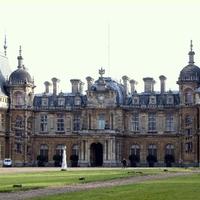 When we think of Jewish built heritage, we usually think of synagogues, Jewish cemeteries and other communal or religious structures, as well as former Jewish quarters and shtetls. Oxford University Professor Abigail Green argues that there is another set of buildings that should be included as part of Jewish architectural heritage – the Jewish country house: rural villas and mansions that were owned, renewed and sometimes built by Jews. Oxford will host a conference on the Jewish Country House in March, 2018.

The English ‘Country House’ is a central component of the British heritage landscape. Owned and managed in many cases by the National Trust, these houses are celebrated and enjoyed as ‘national’ treasures that tell a story about continuity and rootedness: the ties between a noble family and a particular rural community, the rise and fall of a branch of the English aristocracy. This is a story in which– ostensibly — there is no place for Jews, because English Jews, most of whom arrived in the late 19th and 20th centuries, put down roots in towns not in the countryside. Yet a surprising number of English country houses have a Jewish story to tell.

Some great houses, like Upton House in Warwickshire, belonged to Jews – in this case the oil magnate Lord Bearstead. Some like Oldway Mansion in Devon were built by Jews – in this case, the American sewing machine millionaire Isaac Singer who indulged his taste for ancien regime France. Others were reimagined by Jews. Trent Park, for instance, was an undistinguished Victorian property before it was essentially rebuilt at the behest of the liberal MP and socialite Sir Philip Sassoon, who turned it into one of the great houses of his age: “a dream of another world – the white-coated footmen serving endless courses of rich but delicious food, the Duke of York coming in from golf… Winston Churchill arguing over the teacups with George Bernard Shaw, Lord Balfour dozing in an armchair, Rex Whistler absorbed in his painting…”. Meanwhile, Sir Philip’s sister Sibyl married into Houghton Hall, one of England’s finest Palladian houses and, with her money and extraordinary art collection – renewed it, as Jewish heiresses often did when they married into the aristocracy.

Nor is this just an English story. All over continental Europe, wealthy, cosmopolitan, aristocratic Jews were busy buying, building and redeveloping ‘Jewish country houses’ – although the nature of these properties varied from place to place. The German Jewish statesman, aesthete and industrialist Walter Rathenau bought a dilapidated little royal palace in the flatlands of Mark Brandenburg and restored it to its 18thcentury glory, adding just a touch of modern style. A neo-classical gem on the edge of an unremarkably picturesque Prussian market town, Schloss Freienwalde does not compete in size or grandeur with its English equivalents. Possibly as a result, its future as a museum dedicated in part to Rathenau’s memory is now in doubt.

The Riviera presented wealthy Jews with other possibilities. Théodore Reinach, an archaeologist and French politician with a passion for ancient Greek culture, built his dream home in a classical Greek style that was both fantastical and restrained. Like Rathenau, Reinach and his brothers came to symbolize for anti-semites the place of Jews at the heart of the political establishment. Yet Reinach’s relationship with his Jewishness was ultimately positive: the Villa Kerylos boasts a Magen David motif on the mosaic library floor.

For many Jews, however, owning a country property was a step towards social acceptance, assimilation, and conversion. Castello Sonnino di Montespertoli was bought by the Jewish banker Isacco Saul Sonnino in the early 19th century. Isacco converted to Anglicanism and married a Welsh woman. His son served twice as Prime Minister of Italy and his descendants still live there, running it as a tourist destination and boasting of the family’s ‘Ancient bonds of history and land’. Like so many of the websites advertising country house museums with strong Jewish associations, this one fails altogether to mention the Sonninos’ Jewish origins.

Were these, then, Jewish country houses, and if so how can we integrate them into our understanding of Jewish heritage and the Jewish built environment?

The answers to these questions are not straightforward. These are all properties with individual stories, and the Jews who owned them related to their Jewishness in very different ways. Sometimes of course they were religious. Sir Moses Montefiore and Samuel Montagu were orthodox Jews. Their properties – East Cliff Lodge and South Stoneham House – were Jewish homes, replete with Sukkot, mezuzot and kosher kitchens. The Montefiore synagogue and mausoleum in Ramsgate mean that the Jewishness of East Cliff Lodge is part of its legacy. But the Jewishness of South Stoneham House has vanished from local memory – the Montagus and their houses are celebrated instead as ‘the last gasp of the Southampton aristocracy’.

Of course, most of the Jews who bought or developed country houses were relatively disengaged from their Jewishness. Many felt conflicted about it, and some sought to escape it through conversion. Yet their contemporaries – unlike the heritage industry – invariably related to these men and women as Jews. And in a rural landscape so powerfully shaped by Christianity, it is hard to argue that their Jewishness did not matter.

Thinking about country house museums like Trent Park, Schloss Freienwalde, Villa Kerylos and Castello Sonnino as Jewish country houses expands our understanding of Jewish heritage. It shifts our focus from the religious sphere epitomised by synagogues and cemeteries and encourages us to think about other ways in which European Jews have shaped the continent’s heritage and built environment. It illuminates the integration of Jews into European culture and society and the ways in which they helped shape it. By connecting Jews to ‘national treasures’ like Houghton Hall, it adds an unexpectedly cosmopolitan twist to a well-worn national narrative. And in their diversity and particularity these houses tell very individual stories that caution us against essentializing the European Jewish past.

Abigail Green, a Professor at Oxford University, is a coordinator of a new project on “The Jewish Country House.” The initiative is in very early stages, she tells JHE, “but already Historic England and the National Trust are taking an interest, and we are keen to forge partnerships with country house museums and heritage organizations in other European countries.”

She adds: “If you work on Jewish country houses or in them, if you are interested in developing and thinking about this aspect of Jewish heritage, please consider attending or contributing to the conference we are holding in Oxford next March.” For more details see: http://torch.ox.ac.uk/jewish-country-house