Insights into Archaeology and Heritage

As an ancient history student, I was first introduced to Manar al-Athar in 2019. I was unfamiliar with digital humanities at the time but Manar proved to be a good start: the layout is straightforward, easy to navigate, and covers a huge database of images from across the MENA (Middle East and North Africa) region. My appreciation for what this sort of photo archive could offer greatly increased during the COVID pandemic, however, when I was researching temples at Thugga with only my laptop and Google. Beforehand, I would have relied on textual descriptions of temple plans and layouts, with a few glances to any accompanying pictures. Without the luxury of a library, though, I was forced to look for myself, and this has since developed into a skill I couldn’t do without – and a skill entirely facilitated by websites like Manar.

I was understandably eager, then, to apply for the micro-internship with Manar al-Athar’s team in Hilary Term (2021). I thought that this would be a great opportunity to see how the archive is managed and curated, as well as a good way to practice those online research skills which have recently become so essential. Although we only had five days to work on our miniature projects, the Manar team did an excellent job introducing us to all of their members and making sure that we felt well-supported and familiar with their wider goals. Our contributions towards these goals were obviously time-limited, yet we felt fully integrated within Manar’s team and had a strong sense that our work was genuinely valued.

The five days of the micro-internship struck a good balance between individual and collaborative work. We were each given the freedom to pick our own geographic region (I chose Turkey) and to then investigate the condition of digital resources for heritage in that region, with an eye to how Manar al-Athar might develop its own strategies in these areas. This satisfied my vested interest in learning more about local histories, whilst also spurring me to look up from antiquity and assess the real-life role of ancient ruins and culture in a vibrant and increasingly important part of the modern world. I had completely overlooked this part of the internship whilst I was applying, but I found it to be much more rewarding and interesting than my expectations beforehand (although these were amply met as well!).

I began by exploring the heritage resources available for Turkey and Armenia online, keeping a close eye on projects which were locally run and those which were managed by Western institutions/funders. As I scrawled past outdated websites from the previous century, it became increasingly clear that there was a stark divide between the standard of digital resources for Graeco-Roman heritage and everything else. Aphrodisias, Ephesus, Pergamon – these had the most modern and useful academic resources due to their connection to wealthy Western universities (the reasons of which are fairly obvious), whilst local Turkish reports on non-Classical locations complained of poor funding, low international interest, and wilful neglect by national authorities.

Perhaps I shouldn’t have been so surprised that Eurocentric archaeology has a long legacy even within a field as new as digital humanities, but I was even more intrigued by another discovery. It can be easy to forget that history has a real purpose in the present, but I was starkly reminded of this as I found that various Turkish NGOs concerned with protecting minority heritages online had been under political and legal pressure to delay or cease their operations. This raises a whole host of difficult questions, which I now realise that Manar and similar projects must face on a daily basis: how far can our external and foreign efforts go before they start to clash with local, national interests? And, more importantly, where do we draw the ethical line between preservation and interventionism?

This brief insight into Manar al-Athar has completely revitalised my desire to pursue further study and work in the heritage sector, and I would recommend such an experience to anyone – it certainly appeals to a whole range of interests far beyond ancient history and archaeology. Beyond that, the team at Manar couldn’t have been more friendly or helpful. The whole internship was thoroughly enjoyable, and it would be a great investment of time!

To find out more about this micro-internship project read a blog post by Cleome Rawnsley here. 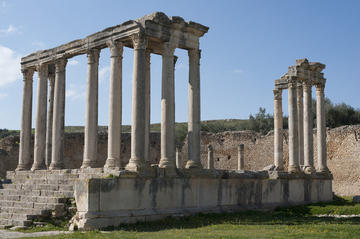