Merton College Library is home to a wonderful treasure: books. Not just any old books, but 329 medieval manuscripts (including three in Greek!) and a large collection of medieval fragments.

There are several reasons which make the Library and its medieval collection significant: 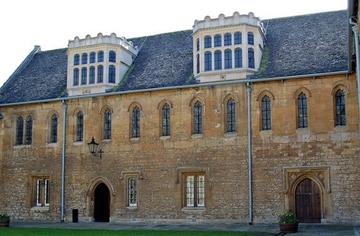 The catalogues, printed and online

The medieval manuscript collection has attracted much research, and various post-Reformation catalogues have listed and described its contents. The first descriptive catalogue appeared in H. O. Coxe’s two-volume Catalogus Codicum qui in Collegiis Aulisque Oxoniensibus hodie adservantur (1852) that lists and identifies the contents of the books but mostly ignores palaeographical details, decoration, and provenance. F. M. Powicke’s Medieval Books of Merton College (1931) collates the existing manuscripts with the medieval booklists and donation records. However, the complex organisation requires a certain level of expertise, which somewhat limits its usability. Several essays by N. R. Ker on various aspects of medieval books at Oxford college libraries from 1950s onward have also addressed many Merton College manuscripts. A modern catalogue was very much needed.

2009 saw a significant event for the manuscript studies of Merton College collections. Decades of research saw fruition in R. M. Thomson’s A Descriptive Catalogue of the Medieval Manuscripts of Merton College, Oxford, with a description of the Greek Manuscripts by N. G. Wilson. It instantly became, and will continue to be, an authoritative source for all medieval manuscripts at the College (including three Greek manuscripts). Moreover, it also presented a catalogue of loose fragments preserved in folders or guard-books, and fragments still bound in the College library’s printed book collection. 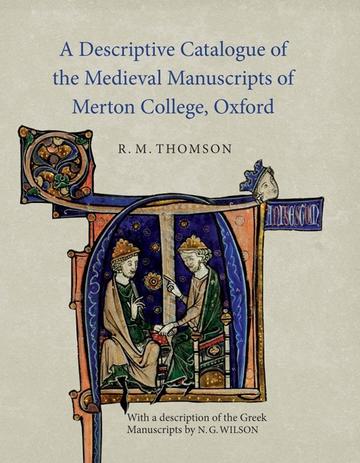 2009 catalogue of medieval books and fragments at Merton College, Oxford.

In 2019 Merton College undertook an additional cataloguing project with a modern twist: all the descriptions from R.T. Thomson’s 2009 catalogue were to be incorporated in the online catalogue of Medieval Manuscripts in Oxford Libraries.

Printed catalogues still carry significant weight among researches (verifiable, referenceable, immutable) when compared to electronic catalogues (uncertainties around the authorship, stability and longevity of descriptions). However, there are significant benefits for researchers, teachers and learners alike for having online descriptions of manuscripts readily available (discoverability, ease of access, among other things). It is with these benefits in mind that #MertonTEI project took flight.

The TEI P5 encoding guidelines used at the Bodleian Libraries contain a massive amount of details about the encoding principles. The purpose of #MertonTEI was to place the printed descriptions (Contents, Physical description, History) online as they appear in Thomson’s catalogue. Encoding guidelines required a slight restructuring of the information (for example, the online record of ‘Physical description’ includes fields for ‘Decoration’ and ‘Hands’, where these were handled separately in Thomson’s catalogue). The main message remains: the online entries are as faithful a representation of the 2009 catalogue as possible. 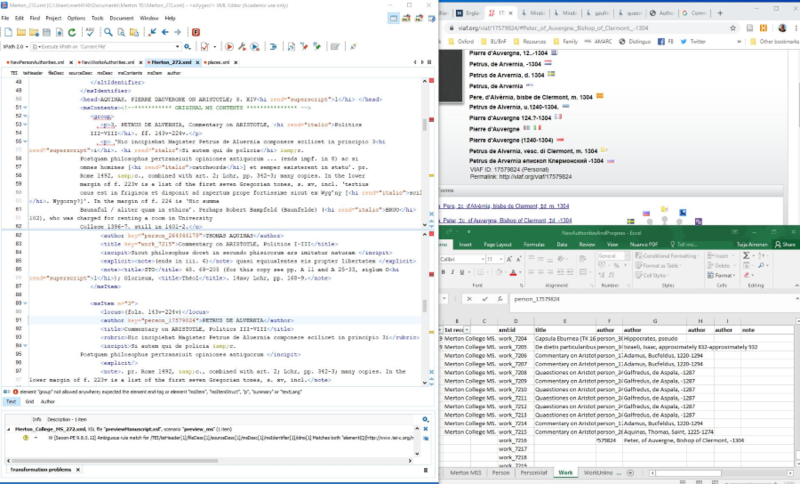 A screenshot of a standard workflow: A catalogue record open in the XML editor, various website tabs open for checking online resources, and recording the progress in an excel sheet.

The main encoding that improve searchability and discoverability, and that the #MertonTEI followed are:

The catalogue text is searchable as free-text within the online catalogue as a whole, or one can browse the Merton College collections of fragments and manuscripts through a separate tab: 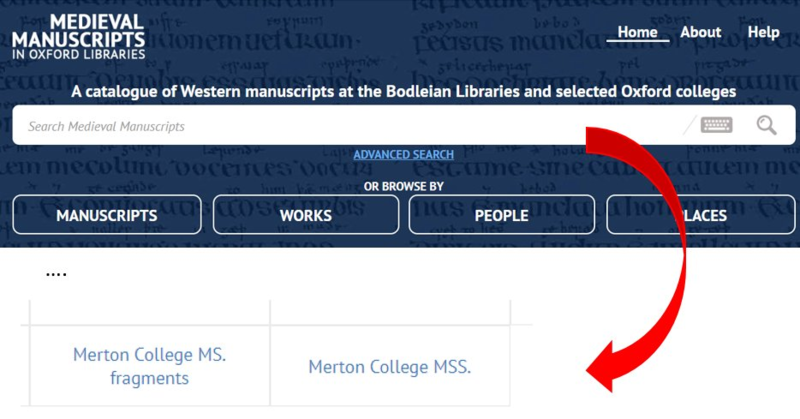 What in hindsight proved to be a genius decision, Merton College envisaged that the workflow could be mostly done remotely with occasional on-site meetings. Julia Walworth, Fellow Librarian at Merton College, oversaw the whole project and was available for any consultation that had to be resolved with the actual manuscripts at hand. Matthew Holfod, Tolkien Curator of Medieval Manuscripts at the Bodleian, provided support and training with the encoding and incorporation of the records to the online catalogue. At the time when the COVID-19 restrictions hit, the #MertonTEI was able to continue without a hiccup on the already trodden path.

As the printed catalogue provided such well-organised and thorough information on the manuscripts, the encoding work advanced well. In early 2020 a decision was made to improve the online records by adding more bibliography than was included in the Thomson catalogue. Each online record can include a link to the bibliographic database Zotero, the reference management software used for the medieval manuscript collections at the Bodleian.

An example of the Zotero gateway from the record for Merton College MS. 248 which abounds in bibliographic references. The catalogue record proves that it is worthy of all the attention it has received - check it out!

Over the decades, the medieval manuscript curators at the Bodleian Libraries have created boxes upon boxes of reference cards that record published research on the Oxford manuscripts. In order to enable work from home, the project officer photographed over 2,000 reference cards in two days, and started to add the references to Zotero. 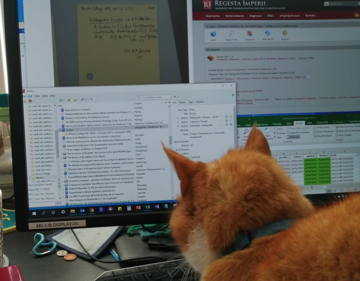 Bibliographic records in progress, with some unexpected help at home.

It is with delight that we can report that the work is now completed. All of Thomson’s catalogue records for medieval manuscripts and fragments at the Merton College are now online, and the backlog of c. 2,400 bibliographic references from Bodleian’s reference cards have been incorporated.

Promoting the project and highlighting its progress over the months was an integral part of the project officer’s job. For one, it provided a welcome distraction from the repetitiveness of encoding and allowed a different kind of engagement with the material under scrutiny. The main purpose, however, was to engage with interested public and highlight the work done with this exceptional manuscript collection. All the progress tweets can be handily accessed through #MertonTEI. 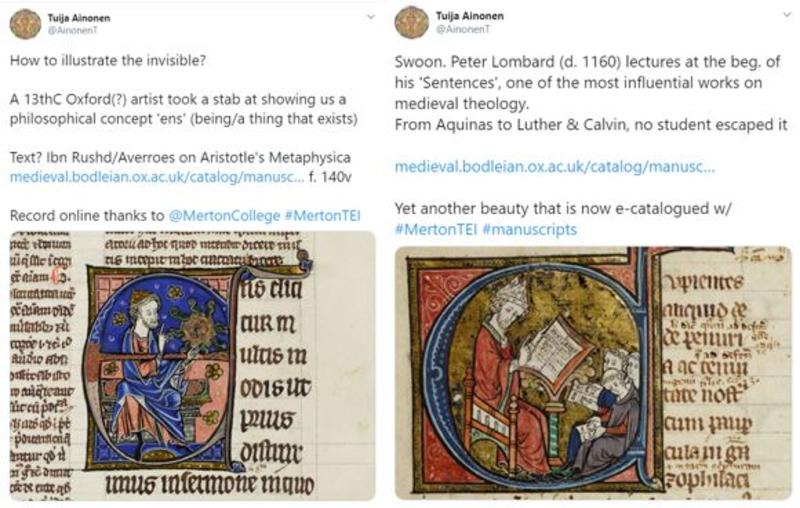 With the encoding project now complete and all the entries on-line, a new series of highlight tweets was born as the Fellow Librarian started a series of #MertonMSS tweets. The project was a result of the coronavirus lockdown and the closure of libraries in Oxford. Permitted to enter the Merton Library to check on conditions once a week, Julia took the opportunity to spend a few minutes looking at each manuscript in numerical order, taking a few quick photos and sharing some aspect of the book and/or its history. Each tweet provides a link to the online catalogue so that viewers can move quickly to the full description. To date there have been an average of four link clicks per day. Although tweets with beautiful illuminations are always popular the most popular tweets in the #MertonMSS series so far have featured details of the bindings. The sequence will continue once the libraries re-open, but it may be a while before researchers can once more consult medieval manuscripts. With luck that will happen well before the 329th tweet is sent! 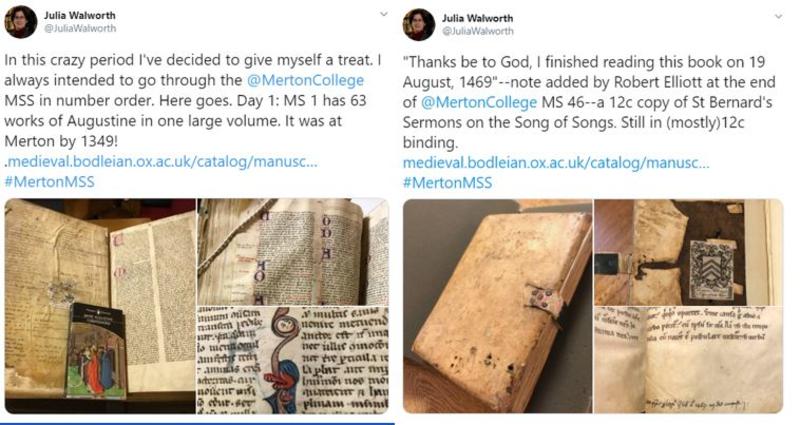 Overall the project lasted 13 months with 1 officer working part time (c. 0.5 fte with flexible working pattern). Some key statistics from this time include:

What is next? The work done so far already benefits the user community. Each record in the online catalogue provides a snapshot of the current state of affairs, and points to research done with individual manuscripts. Users can browse Merton collection alone, or they can execute structured searches on persons, works, organisations and places of production, limit the results based on languages used, century and so forth. The Help-page provides useful information in this regard. As more manuscripts from different collections are added to the catalogue, it will be easier to find connections between manuscripts and collections within Oxford.

With online access to the catalogue records we have already witnessed an increased interest in the collection items, and received queries about plans for digitising the manuscripts in full. At the moment there are four Merton College manuscripts that can be found fully digitized in Digital Bodleian, but digitization of all the Merton manuscript books is part of the library’s long-term plans. 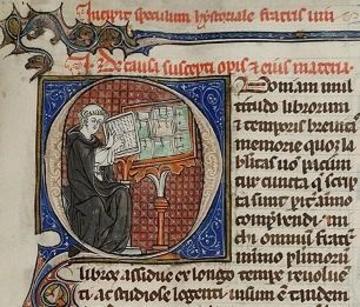 Merton College MS. 123, fol. 5v Vincent of Beauvais would surely have been a frequent user of online manuscript catalogues.

Tuija Ainonen (https://twitter.com/AinonenT) is a medieval manuscripts specialist who has worked for numerous digitization projects, with interests in book history and digital humanities. She currently works for the Bodleian Libraries. 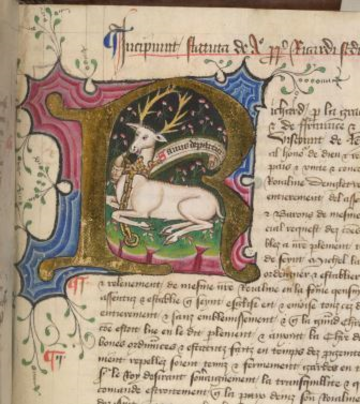