Sending Letters and a Unicorn: How Medieval Nuns Coped with Social Distancing 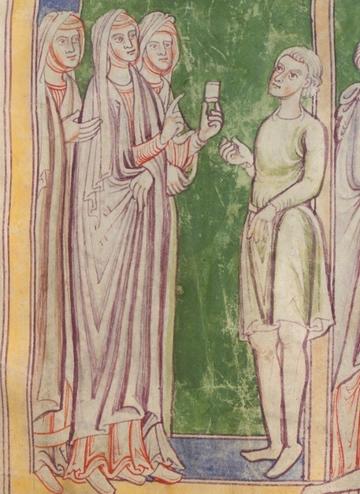 The current pandemic, as horrible as it is, seems to have heightened public awareness of pre-modern solutions to modern problems. Blog posts have looked, for example, at St Corona, the Black Death and precedent lock downs, or the strategies medieval anchoresses used to cope with the loneliness of their cells.

Medieval anchoresses and nuns in enclosure also provide a good example of how to maintain relationships without meeting in person. Despite digital communication tools we all have experienced that it can be quite difficult to feel a real sense of community without in-person encounters. So which strategies for coping with social distancing can nuns who only had pen and paper at hand teach us? 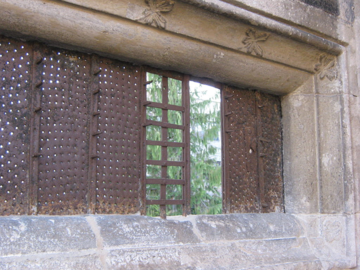 Conversation also was considered a risk for enclosure: A window, once probably covered with fabric, that allows visitors to speak to the nuns (speaking window). Convent of the Poor Clares in Pfullingen, Germany (Wikipedia commons).

Medieval nuns who chose enclosure to approach the divine through contemplation, developed ways to ensure that families and friends would not forget them - and to show that their prayers benefited society. One of the most effective ways was to develop letter writing to an art form, and overcome distance by imbuing the words with transcendent symbolic meaning. This involved a balancing act: Theologians frequently warned that letters could be disruptive and let the loud, mundane world into the convent. After all, letters were always associated with secrecy, individuality, physical presence, and material goods. St Jerome, for example, carried letters with him and talked to them like to his friend,[1] and St Augustine considered letters to enable greater intimacy than would be possible when the person was physically present but silent.[2]

Many sources reveal how nuns crafted letters in conformity with their rules. Important evidence can be found in the letter books from the Benedictine nuns of Lüne, the largest cache of female writing from late medieval northern Germany. 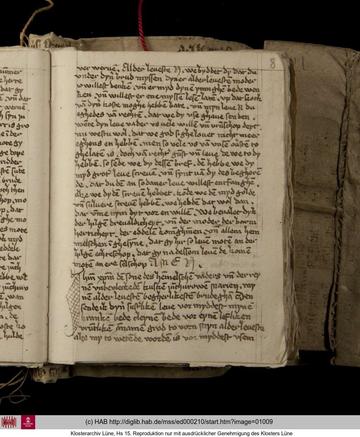 The nuns drew on the imaginative potential of letters to overcome distance and to build a sense of community with their families, friends, and other convents, for example, by sending saints as envoys: “Since we are related, it would be appropriate to come to your wedding feast. […] Yet God has chosen me to my own wedding, and he planted me in this earthly garden of paradise. […] So, I wandered around the heavenly fortress of Jerusalem and asked all the dear saints to come out for you.”(Lüne Hs 15, quire 28, fol. 2v). Depending on the recipient, these can be different saints: Mother Mary shall be the merciful host; St Michael shall ensure that only the best things happen to bride, groom, and their guests; St Matthew shall help them to keep their worldly wealth without striving for it too much; St John shall bring their offspring blessing; and St Anne, St Catherine and St Ursula with her 11.000 handmaidens shall always be companions in time of need (Lüne Hs 15, quire 27, fol. 6r-8r). These imaginary envoys could also carry elaborately described symbolic gifts: e.g. pearls and gemstones of a golden necklace, described and interpreted as the virtues and blessings that shall adorn the recipient’s soul (Lüne Hs 15, quire 28, fol. 14r-quire 29, fol. 1v). The nuns argue that, because of their vow of poverty, they cannot afford those expensive gifts, but send a letter instead: “We wish to ask from you that you receive it with the same love as that with which we have written it. If we could have written it in gold and silver, we would certainly have done so. Therefore accept our goodwill as a token” (Lüne Hs 15, quire 27,fol. 8r). 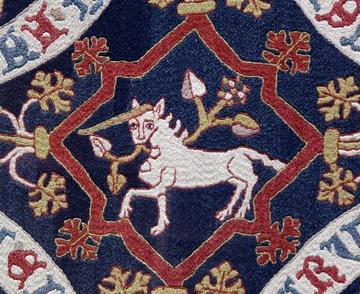 A little unicorn depicted on the so-called Christmas Tapestry, one of the impressive tapestries the nuns of Lüne embroidered in the 15th century (Restaurierungswerkstatt, Klosterkammer Hannover).

In other letters, real gifts became metaphors as the nuns interpreted and explained the details. Such gifts ranged from books and devotional pictures to little jugs, dresses, or even two young unicorns. The sender advices the recipient to build a fence around the pasture and to heighten it soon, because “the unicorns jump around so merrily” (Lüne Hs 31, fol. 82r). While it remains unclear what the real gift might have been, the unicorn was a symbol of purity, virtue, and of chaste love, which could only be tamed by a virgin. Thus it became an allegory of the incarnation, in which the virgin was equated with Mary and the unicorn with Christ. The gift for the nun could have been toys, an animal shaped gingerbread, a pastry model, or an embroidery of the creatures.

The empathy palpable in those exchanges is also expressed directly whenever the nuns ask about the wellbeing of a friend in another convent: “I would like you to tell me that you are feeling better. Otherwise I cannot find peace”(Lüne Hs 15, quire 9, fol. 5v). This is also manifest in their deep sympathy for a mourning mother: “I understand that you are in pain and distress, because love is always deep between mother and Child.” The recipient shall soothe her heart to prevent “falling ill with excessive melancholy and tears”, and think of Mother Mary, who had to witness the cruel death of her son. To her she may confide her suffering, for Mary “knows from experience how a grieving mother feels” and will comfort her (Lüne Hs 30, fol. 39v). The nuns also do not hide yearning for their fellow sisters in neighbouring convents: “Give my greetings to the crows and ravens. When I sit here in my cell and hear the crows sing and see the ravens hopping in the snow, I think of my beloved sisters in Lüne” (Lüne Hs 31, fol. 158r). By verbalizing their empathy, the nuns connected emotionally to their social network, and this connectedness enabled them to resist in times of crisis. The nuns survived the Black Death as a community – and the Reformation, for them an even deadlier threat, alive and kicking now in the 21st century. 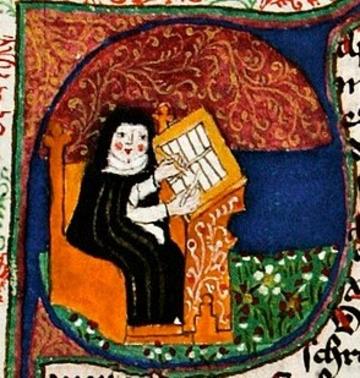 The nuns in Lüne valued their letters to such a degree that they copied and kept them in their convent’s archive. In this way, they served for continuous edification, to encourage remembering the social network, and to provide examples for teaching the novices how to write. The skill of conveying not only information but also emotion is one that can only be acquired by continuous practice; it was, and still is, an art to write letters that are clear and do not allow for misunderstanding. When communicating through written words alone, appropriate wording is of vital importance. Not surprisingly, the twelfth century saw the invention of letter writing manuals, when societal structures were becoming increasingly complex and demanded expert networking skills. These manuals offer  examples of wording for all sorts of situations, so that the message is understood as expected and a close relationship can be established, even if you do not see or hear each other.

Therefore, when we feel lonely in the enclosure of our homes, a carefully written letter can comfort us. The search for the right words can bring order to one’s thoughts. It sends the mind on a journey to another person in a different place, and also provides the recipient with an individual, physical sign of company. So, why not make the effort for a friend and go on a journey of the mind yourself?

Dr Lena Vosding is a postdoctoral researcher working at the Faculty of Medieval and Modern Languages, University of Oxford. In her book, she examined the Lüne letter books in terms of form and function. To learn more about the project, the letters, the nuns and their current counterparts in the convent, see the six L.I.S.A. episodes about Lüne Abbey:

Founded in 1172, Lüne Abbey developed into a prosperous religious centre for the Lüneburg region. The Benedictine nuns formed a strong network with other convents in Northern Germany and joined an influential reform movement in 1481. In the 16th century, they transformed into a Protestant community after a prolonged struggle with the Duke of Brunswick-Lüneburg. The project 'The Nuns' Network' explores this phase of change and reform in the 15th and 16th centuries, examining the significance of the Abbey and the communication strategies of the nuns based on letter books. These contain almost 1800 letters providing information about pastoral care, debating devotion and theology, and giving insight into daily life in the convent. The letters also highlight the role of rhetoric and learning for women living in strict enclosure.

Among the numerous treasures of Lüne Abbey, the three letter-books are one of the most significant holdings. Into the three hefty tomes, the nuns copied nearly 1,800 letters and accounts from their correspondence during the 15th and 16th centuries. They offer an insight into the nuns' lives from their own perspective. Particularly revealing are the arguments surrounding the Lutheran Reformation; the Duke of Brunswick-Lüneburg finally succeeded in nominally turning the convent into a Protestant community – but the women documented their arguments and preserved the record of it to this day in their Abbey.

The Lüne letters give in-depth insight into the special role of women in religious orders. In medieval society, women were subordinate to men, being in the munt (under the guardianship) of their fathers and then of their husbands, only as widows gaining full control over their legal affairs. This was different in female religious houses. The prioress and other office holders took on a variety of significant roles for the community, and it was a high responsibility to lead the monastic community consisting of several hundred people. The esteem for religious women was based particularly on their status as brides of Christ (sponsae Christi), at the side of the highest king, leading to a elevated rank in the medieval hierarchy. This position was an obligation but also a source of pride for the women as many of the letters show.

Editing the letter books from Lüne Abbey is a complex process which relies on the regular exchange between the team members in Düsseldorf, Oxford and Wolfenbüttel: the letters need to be deciphered, structured, commented upon and encoded to make the networks of the nuns accessible again. The edition allows full and fascinating insights into the knowledge structure, the communication and the rhetoric of the nuns. But the letters reach beyond that: private and personal aspects of the life of the women in the convent become visible and relatable, 500 years after they were first written down.

An important part of the editing process is the commentary contextualising the style and content of the letters. A key finding is how scholarly learning and oral culture meet and mix in the letters, showing how the nuns operated on an equal footing with the learned male clergy. In a letter accompanying a gift of wine for the Provost, the young nuns for example show off their Latin learning – with more than a bit of self-deprecating humour. Such a letter could be read out aloud e.g. at a convent feast and thus re-enter the oral sphere of the monastic setting.

Episode 6: The General Interview (on the international collaboration), 09/23/2020

The last part of the series the two Principal Investigators, Eva Schlotheuber (Düsseldorf, History) und Henrike Lähnemann (Oxford, German Literature), in form of an interview talk about the genesis, challenges and perspectives of the Lüne letters project. What is the knowledge basis required to work with medieval letters and what challenges does the interdisciplinary collaboration between history and German Studies face; how is the project charting new territory? The exchange between the two investigators also focuses on new methodological approaches, the fascination of the letter books and the important question whether the letters could be considered private. And above all – what is the message of the letters for us today?