The Future of Heritage

On Thursday 1st June, a panel of heritage experts came together for the sixth and final event in the MOVING, TEACHING, INSPIRING lecture series.

The evening began with a thought-provoking introduction from Dame Helen Ghosh. Displaying an evocative image of Clandon House, a Palladian mansion owned by the National Trust and severely damaged by a fire in 2015, Dame Helen asked, “What should the National Trust do next?” Should they look to restore the building to its former grandeur, or should they accept the fire as part of the building’s history, and use it to create a new vision for the property? This dilemma, centred on an image of fire-ravaged grandeur, encapsulated one of the biggest challenges facing the heritage sector today: how to remain true to the past whilst also staying relevant. In her opening remarks, Dame Helen went on to introduce three aspects that were to recur throughout the evening’s discussions: conservation, preservation and communication. How you decide what should be looked after? Is heritage about preserving ways of life? And how do you genuinely reach out to the entire nation and beyond?

Following Dame Helen’s introduction, John Orna-Ornstein kicked off the panel discussion by provocatively challenging the Trust’s ‘For ever, for everyone’ campaign slogan, stating that “nothing is forever, nothing is for everyone”. The discussion that followed focused mainly on the seeming tension between conservation and access. Carole Souter and Sandy Nairne spoke in favour of use and sensory engagement, with Souter pointing out that object handling was a prime way to make the past seem less distant from people’s everyday reality. During the course of the conversation, the panel moved away from conservation versus access to conservation for access, presenting the two as complementary rather than opposed.

The subject of audience was also central to the evening’s discussions. Responding to Peter Mandler’s question of whether the Trust was looking to target ‘easy’ or harder to reach audiences, Helen Ghosh highlighted the challenge of reaching those who had already written historic sites off as “fundamentally boring” before they had even stepped through the door. Dame Ghosh added that assumptions were a big problem for the National Trust, and that the organisation often found it hard to second-guess what the general public think of as their heritage.

The panel then turned their attentions to authenticity. Referencing the developments in history and heritage since the late twentieth century, Dan Hicks pointed out that the two had come to be seen in conflict with one another, with heritage seen as a “trick” in contrast with “true” history. The audience questions picked up on this theme, with the conversation turning to interpretation, and in particular the seeming tension between facts and storytelling. Sandy Nairne quipped that he’d implemented a “no ruffs” rule at the National Portrait Gallery, before stressing the need for clarity and integrity in interpretation. Both Peter Mandler and Helen Ghosh presented history and storytelling as complimentary. For Dan Hicks, the real challenge facing today’s heritage professionals is deciding which story to tell, and what this might mean for alternative narratives. Peter Mandler suggested that offering multiple levels of interpretation was one way to address this problem.

The conversation then turned to the question of who should be responsible for curating heritage. Particular emphasis was placed on the pitfalls and merits of inviting film directors and entertainers to curate exhibitions. Sandy Nairne said that the question of “who else interprets?” is one that heritage professionals today should be asking themselves. Dan Hicks made the point that even the curators and scientists are interpreters, while Carole Souter stressed the need to be honest about whose vision the space represents.

“Is the role of the National Trust to present a comfortable and easy history?” The panel responded to this next question in a variety of ways. Helen Ghosh pointed out that people visiting heritage sites wanted to be comforted and inspired at the same time, while Peter Mandler suggested that people were looking to be thrilled by an unfamiliar encounter. Dame Ghosh said that it was important for the Trust to convey a historic mindset, and to show visitors that people of the past thought differently than we do today. Looking forward a few hundred years, Carole Souter mused that future generations might find our architectural choices odd, and that the skyscrapers of today might be seen as “astonishing mistakes” tomorrow.

The conversation then returned to alternative voices in heritage, yet this time the focus was not on film directors and entertainers, but on community voices. The tension between curatorial and community viewpoints was best summed up by Sandy Nairne in his example of the ‘Gay Icons’ exhibition, which was held during the nineties at the National Portrait Gallery. Having asked ten high profile figures to name their icons, the curators fully expected Kylie Minogue to feature on the list, yet when she didn’t, they nicknamed the event the ‘What, no Kylie?!’ exhibition as a humorous testament to their naivety. Dan Hicks struck a more serious chord with a turn to difficult heritage, pointing out that we are now beginning to acknowledge and discuss the more uncomfortable events of our past, typified by the recent ‘Rhodes Must Fall’ debate in Oxford.

Given the current climate of political change, it was little surprise that the conversation finally turned to heritage and politics. Over the next few years, the heritage sector will have to contend with the aftermath of Brexit and funding cuts. Yet, in this time of uncertainty, it seems that the nation needs heritage now more than ever. As the evening drew to a close, the image of Clandon House came to mind once again. Heritage in the twenty-first century will undoubtedly be scorched by the many challenges ahead, yet like a phoenix rising from the ashes, renewal and regeneration can only make for a better and brighter future. 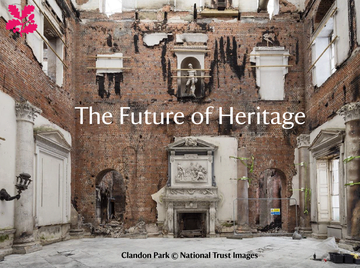