The Mecca of Europe in Suburban Surrey

In February Alice Purkiss, National Trust Partnership Lead, joined colleagues from Oxford's History Faculty, the National Trust's Research Team and the Everyday Muslim project team on a visit to Shah Jahan Mosque in Woking, and the Muslim burial grounds in nearby Brookwood cemetery. The following blog post about the day was originally published on Oxford's History Faculty website here.

It is hard to believe now, but in late February some 30 Oxford historians – and one rogue Classicist – set out on a day trip to visit the Shah Jahan Mosque in Woking, and the Muslim burial grounds in nearby Brookwood cemetery. The weather was absolutely appalling, and it rained steadily from the moment of our departure. But there was a palpable sense of excitement as the coach left Oxford since it was years, if not decades, since any of us had been on a collective outing of this kind.

As the first purpose-built mosque in Britain (and indeed most of north-west Europe), the Shah Jahan Mosque is a site of unique importance for Muslim British history: ‘the Mecca of Europe in suburban Surrey’ as a recent article in The Times put it. Nearby Brookwood cemetery has likewise recently acquired a blue plaque as the site of Britain’s first Muslim burial ground. These two historic sites are now the focus for Britain’s first Muslim Heritage Trail, which have been developed by travel writer and Muslim heritage activist Tharik Hussain on behalf of Everyday Muslim, an inspiring community history project led by Sadiya Ahmed. We were lucky enough to be able to spend part of the day with them on a visit that taught us more than any of us had expected about Britain’s multicultural past.

The trip was led by Abigail Green and Faridah Zaman, both of whom saw direct connections between the trip and their own research. The mosque itself was a significant feature of the social and cultural landscape of the international Muslim intellectuals that are the focus of Faridah’s work. It relates in rather different ways to Abigail’s interests in inclusive and dissonant heritage, both because the mosque itself was originally conceived as part of an interfaith educational complex by Gottlieb Leitner- an intriguing character who started life as a Hungarian Jew - and because of its symbolic importance today.

Our visit began with a presentation by Sadiya and her colleague Tanya Muneera about their work archiving British Muslim history in its many different dimensions – from the experience of migrants who never expected to stay in this country, through the underexplored history of Black British Muslims to their new project on Muslim women in Britain. Tharik then gave us a little context for the sites we were about to visit. As historians who spend perhaps too much time in libraries and institutional archives, it was fascinating to learn a bit more about how grassroots history works.

We were pushed for time because we needed to vacate the main mosque for Friday prayers, but it was clear that the presentation had provoked lots of questions for Oxford historians, some of which we were able to follow up over the tea and biscuits kindly provided for us. This was also an opportunity for graduate students, faculty members and colleagues from the Oxford-National Trust Partnership to discuss possible connections between the work of Everyday Muslim and our own research.

As it turned out, we all brought different expertise and interests to the trip. For those of us teaching modern British history, it provided an unexpected window onto the evolution of multicultural Britain, and one that will certainly inform our teaching as we set about ‘decolonising the curriculum’. For those of us researching global and imperial history, it illuminated a different set of relationships, whether we were interested in the military service of imperial subjects, Muslim activism in interwar Europe, or early modern networks. For all of us, it was properly eye-opening: those of us who already knew something of the importance of the Shah Jahan Mosque were surprised by its modest size; those born and bred near Woking were embarrassed to find how little they knew of its multicultural past; those interested in British India were blown away by the Zoroastrian section at Brookwood which, although not strictly speaking part of our itinerary, unquestionably enriched it. (Indeed, we understand that Classics are now contemplating a separate visit to this site, which includes a life-size replica of the tomb of Cyrus).

The COVID-19 crisis has, inevitably, made it harder to pick up the threads of this visit since our return to Oxford. Going forward, however, we hope to find new ways in which Oxford can support this inspiring public history initiative, and that the Faculty will find further points of connection with Everyday Muslim - whether through the National Trust partnership, through undergraduate dissertations, or through our emerging work on Oxford’s own multicultural past. Huge thanks are due to Sadiya and Tharik for organising such an enjoyable day

Article originally posted on 4th May on the History Faculty Website. 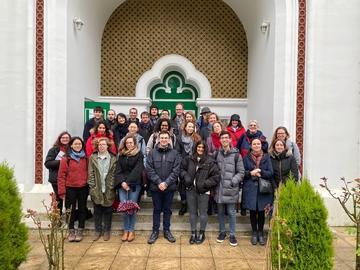