"The Sleeping Beauty" - WINNER of the 11 - 17 Category, the TORCH Storytelling Competition 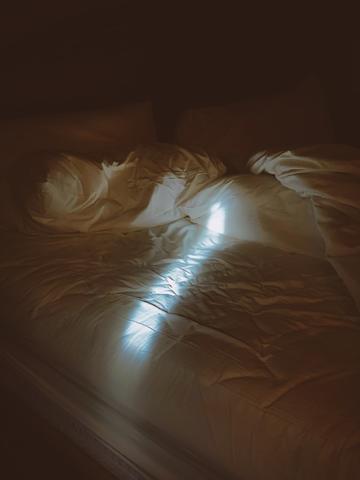 Once upon a time I would have been invited as a Godmother but not now, God no! Not now. Even a fairy is pulled out from under society’s skin like a splinter, something to be ashamed of, and discarded like a match once her fire starts to go out. True, I have started to sag, veins bulge in the whites of my eyes, my breath descends like nicotine, yes it’s true that nobody believes I’m alive now my existence is confined to a bundle of blankets in my tower, not seen for a century, but my cat is my eye to the outside world and my cat has all its lives.

The other fairies radiated youth like the moon does, smiling like flowers that don’t know they’re cut, don’t know they’ll become like me. And they play the game so well, giving the girl the gifts of perfect beauty, mild temperament, grace, musical ability - just as Perrault told you, I’m sure. The gifts of a perfect wife, for since coming out of the disappointment it was not an heir, the king had convinced himself that she was a blessing in disguise as a girl - only a royal marriage would bring new blood to the kingdom, bring a new age! That’s why he named her Aurora, the new dawn, though he could have called her wax seal of a treaty, life insurance, commodity.

I came not out of spite, not out of the ruined pride of an old hag, but out of pity. This child was born into a royalty itself a bastion of confines, I saw her caged like my heart had been in my ribs when I was still young. I came, because only I realised that the other fairy’s gifts were curses that would sit inside her stomach like grease and turn her to stone slowly, only recognising herself as Medusa after staring into her mirror for a whole lifetime. By then it would be too late.

I thought it was romantic that she should die from a spindle –freed from a life at the spinning wheel by its own teeth! I knew the king could never ban the spinning wheel, a king has a duty to think about civil unrest, and what would he do if all those women got out? No, a spindle was a safe bet.

The company wailed of course. The king saw his plans crumble; the queen knew she would have to go through all that once again.

The last fairy interrupted my laughter. Lord, I thought they couldn’t come up with any more curses. But she did. One hundred years sleep? Broken by a kiss? I thought it was a joke. I laughed all the more as I steered off, it even brought a flush back to my grey cheeks. I didn’t see that one coming. It’s a shame, I thought, considering my worn bones and my tan of age spots, that I’m not likely to last long enough to see the mess they’ve made! The young fairies will though, to regret before they too wilt.

Aurora grew. The gifts were true but that first, perfect beauty, scarred her. Her perfection was her only deformity, her skin glowing like moulded wax with that the parallels of geometric symmetry that revealed her innate construction, an artificial nature. Her curves were drawn by a compass. She knew she was abnormal from the way the world stared at her, in awe, in longing, and her music wept like rain clouds in perfect tinkling patterns that built up around her like a pentacle of her own curse.

I waited for her on her sixteenth birthday. I didn’t have to call her; she came to me. The slip of a child didn’t like the way the princes lined up round the hall, didn’t understand the way they held her as she danced with them each in turn. So she ran out for a breath of air under the sky starry with shards of glass, where no one would follow her - along the rows of cabbages and turnips and mud of the gardeners - until the forest closed its jaw on her. They only found out where she’d gone when the gardening boy found one of her glass slippers amongst the roses, where it must have fallen off as she ran.

Fairy-tale princesses were always dead to the world – Snow White in her glass case, Rapunzel locked in her tower, the Little Mermaid diving off the back of a boat. So much the queen thought as they lay her child’s sleeping bones at the top of the castle, sleeping in the prime of her life.

The last thing I heard of the royal family before I faded into the shadows I have grown to love so much, was that after the plague struck the castle, nature began to reclaim the stone, and the rose bushes soon covered all from view.

The prince leapt up the stairs of the castle leaving his silhouette cut through the cobweb mesh, a ghostly tunnel down the stairs. An escape route. He gritted his teeth in excitement, the excitement of leaving his wife and castle that had grown stuffy and dull with all the talk of her pregnancy and his upcoming duties. Here he was on his last adventure before the concrete of parenthood set around him.

She was turned the other way when he broke into the room, curled like the shy new moon hiding its face, covered in masses of blonde hair so bright it could almost have been white. From under the sheet covering her he noted her perfect proportions. That sheet was her metaphorical shroud, a mist floating over her body as a reminder of her death, and so too the prince thought was also her metaphorical bridal veil, as he bent down to rob her of her first kiss, her first love.

He closed his eyes and parted the hair from her face.

He kissed her and screamed.

Aurora woke at the piercing shattering of air around her. What has happened to me? she thought. Why am I so stiff! I can hardly move my arms and my eyes feel like I’m staring underwater. I’m in bed, she thought, I must have been asleep for a long time. Yes, that must be it, I’m in that time in-between waking up and sleeping where everything feels different.

No, she thought, staring into the face of the stranger. Something’s wrong.

The prince’s face was of utter horror. His mouth was hung open like his chin was melting. He stuttered “Grandma, what big eyes you have.”

Aurora stared, confused. “All the better to see you with? Isn’t that what eyes are for?”

The prince wrenched his eyes off her and looked around desperately. He ripped a mirror off the wall and held it up in front of him as if it were a shield.

“Feast your orbs on that. Who’s the fairest of them all?”

If Aurora still had a child’s lung capacity she too would have screamed. But she could not, for they were now riddled with all of one hundred years, shrinking them down to merely the size of two large hearts. For she was now one hundred and sixteen years old.

Her eye sockets had hollowed like someone had carved them out with a spoon, her eyes sank in the middle like lost treasure. They bulged with the fear of stars that have exploded in supernova and collapsed in on themselves, in a mess of veins and loose skin. Her forehead crumpled and folded like thick origami and wrinkles like sea waves creased over it. The skin was no longer white as snow but parched like stretched paper and when shadows fell on it they were the colour of bruises, as if she were transparent around the edges. Her lips were no longer red as blood, though her veins pulsed around her in a crimson mockery of what they had been. Her teeth had started to collapse into themselves long ago like a Chinese box puzzle, so her lips folded inwards leaving a formless slit, a screw-tight purse.

Her hair was as white as her grandmother’s, no, fifty years whiter still and spun yards long.

But we must not forget Aurora’s curse; the last century still could not rob her of her perfect beauty. The prince could not take his eyes off her, could not reconcile the conflict staring him in the face. There was something appalling in her extreme aging, the corruption of her features mirrored in the perfection and clarity of her proportions. Decayed fruit is sickly sweet. Her skin shone even brighter with its depredations of time, and her soft orb-like eyes seemed to have a whole galaxy ballooning in them like spores. A cloudy tear weeped out of her eyelid, like a pearl.

The prince hated himself. He felt sick, yet pulled by gravity diving in to kiss the Sleeping Beauty. The Grandma. It is hard to tell what happened next, as he tried to embrace her yet bounced back in repulsion, then tried to strangle her yet could not bear to ruin the beauty she cursed him with. She was like the twin faces of a tarot card; a rose without a thorn, a thorn without a rose.

He became aware of how the whole bedroom was strangled in that overgrown rose that tangled the castle. He hadn’t noticed it before. He fainted, it smelled so sweet.

Sleeping Beauty has pulled out all of her old woman hair and is knotting it together into a fine rope, like a spider’s thread. She entwines them together like fingers praying, or a sailor winding lucky splice before a storm.

She smiles. She had started to make a noose, but since the prince left she has been renewed with a sense of life.

The wind will whistle Aurora, Aurora, let down your hair and she will cast it off the tower like a sail.

She will lower herself to freedom. After she had drawn the story out of the prince, he had run and locked her in, hoping she would soon decay into a memory. He had burnt her and threw her away, like a matchstick.

Lord knows how her stick-figure silhouette will make it down, but it will.

Oh it will. You have never such determination in a face, like cliff facing the sea, looking South. Beauty becomes ferocious when given knowledge and pride. She knows why Eve decided to wear clothes after eating the apple, from now on she will dress to kill, in pearls and finery, grow to love shadows (you shine brighter in them). Her hollow aged face is the sun, horrible to look at but burning bright. She has done her final metamorphosis, butterfly to caterpillar, Beauty to The Beast.

She will not have been invited as a Godmother but she will come anyway, not out of spite nor the ruined pride of an old hag, she will come to reveal herself and cry out in a hoarse voice

It’s true that nobody believes I’m alive now my

existence is confined to a tower, not seen in a century.

been more me. So I have come to give

the baby of your dear prince, a gift…