‘Women & Power: Redressing the Balance’ was a 2-day conference which took place on the 6th and 7th March 2019 at St Hugh’s College, Oxford. The conference was jointly convened by the National Trust and the University of Oxford to reflect on programming around the 2018 centenary of the Representation of the People Act which granted some women the right to vote. Contributions were invited through an open call and the resulting programme brought together academics and heritage professionals from a wide range of institutions, roles and subject areas to share their work, reflect on practice, and look forward to the future of researching and programming women’s histories.

Thanks to generous support from TORCH and the Women in Humanities programme, it was possible to offer a number of bursary places at the conference. Recipients have contributed to a blog compiling reflections on the conference; the full blog series can be viewed here.

I was not sure what to expect when I signed up to attend the Women and Power: Redressing the Balance conference. I heard about it from twitter and thought that it sounded interesting, but, as a PhD researcher in a primarily literary field, I was not sure how relevant the discussions would be to me, and worried that I would find that most of it went over my head. This was absolutely not the case. I found the experience entertaining, rewarding and informative. As I consider the avenues my career might take me post-PhD, being in a room full of inspiring women working in heritage and academia proved a very positive experience.

The sensitive nature of some of the stories told during the year of ‘Women and Power’ was a recurring point of discussion during the conference, and it was interesting to hear how bad press was dealt with on both a local and national level. Dr Sophie Duncan’s opening keynote highlighted the things to be gained when academics and heritage organisations collaborate. As an early-career academic, I was interested to hear about experiences of ‘knowledge as product’, reflecting on the different ways that organisations can include academics in their projects, including the different ways you can be recognised for your work. As Dr Duncan noted, for a public history programme, this doesn’t always mean seeing your name credited as author on every piece of work you provide. But, at least with the Trust, it meant professional and financial recognition for the skills and expertise provided.

The two days were packed with fascinating talks. I enjoyed hearing about the ways museums and heritage centres across the country have collaborated and co-curated creatively with schoolchildren, pensioners, refugees and charities. The “secrets to making research relevant” offered by the We Are Bess team from Hardwick House were inspiring and entertaining. Dr Kristen Hussey, curator from the Royal College of Physicians Museum, spoke about the importance of admitting to and rectifying mistakes even when they were made with good intentions by collaborating with the experts who can help you to make change rather than becoming defensive and causing further offence.

I was lucky enough to be among the group that got to visit the Pitt-Rivers Museum twice over the two days: once for the drinks reception on Wednesday night, when I spent far too much time looking at the witchcraft cabinets, prosecco in hand, and again on Thursday morning for the a tour of the Intrepid Women exhibition and a workshop from the fantastic women involved in the Multaka-Oxford project. Multaka-Oxford brings women from the communities from which objects in the museum collections originate, and trains them as interpreters and guides in exchange for their cultural knowledge about the collections. It was wonderful to hear from the women first-hand talk about how they have gained confidence and skills and made friends in their new city through the project.

Overall, I found the conference to be a positive space where I learnt a lot and had some exciting and inspiring conversations. Thank you to TORCH for enabling me to attend with your generous bursary scheme.

Isabelle Staniaszek is a PhD student at the University of Roehampton whose research looks at the influence of French medicine on British practice and culture in the late 19th century. She also volunteers on a collaborative project exploring the Leicester Typewriters Strike of 1974, working with the University of Leicester and Leicester Museums.

Image: We are Bess at Hardwick Hall. Akeela Ahmed in front of her own portrait © National Trust - Gavin Repton, portraits by Rachel Adams, 2018 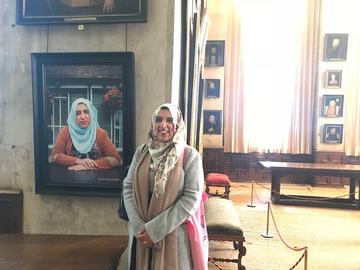