‘Women & Power: Redressing the Balance’ was a 2-day conference which took place on the 6th and 7th March 2019 at St Hugh’s College, Oxford. The conference was jointly convened by the National Trust and the University of Oxford to reflect on programming around the 2018 centenary of the Representation of the People Act which granted some women the right to vote. Contributions were invited through an open call and the resulting programme brought together academics and heritage professionals from a wide range of institutions, roles and subject areas to share their work, reflect on practice, and look forward to the future of researching and programming women’s histories.

Thanks to generous support from TORCH and the Women in Humanities programme, it was possible to offer a number of bursary places at the conference. Recipients have contributed to a blog compiling reflections on the conference; the full blog series can be viewed here.

This spring, I was lucky enough to be granted a bursary to attend the Women & Power: Redressing the Balance conference – a two-day event which brought together academic, cultural, and heritage workers, to celebrate and reflect upon the National Trust’s 2018 ‘Women and Power’ cross-property programme. Having participated in the programme myself – exploring the eighteenth-century intellectual and hostess Frances Boscawen at Hatchlands Park – I was excited by the opportunity to exchange experiences with other practitioners, and hoped to gain some new ideas for future public engagement activities. To say that I was not disappointed would be an understatement: the range and sheer creativity of the projects which were discussed was astonishing. From immersive art installations, to collaborative schemes with local communities; from performance partnerships with actors and singers, to the innovative use of new technologies (including 3D printing) – every panel suggested dozens of fresh ideas for championing women’s histories.

A common thread throughout the conference was a deeply-felt commitment to feminist methodology. In one paper, Jenna C. Ashton drew upon the theories of Sara Ahmed; Ahmed highlights the central role of complaint in challenging racism and sexism, and Ashton suggested that the Challenging Histories scheme might be conceived of as a kind of feminist complaint within the National Trust – an idea which met with much agreement in the room. It was refreshing to participate in an unapologetically feminist conversation about curatorial and heritage practice: never losing sight of the central aim of making every visitor feel welcome, but recognising that this does not mean we need to shy away from diversity and change. When sharing their insights as to how to make academic research relevant, the team who created the We Are Bess exhibition at Hardwick Hall emphasised that relevance is personal – audiences connect with historical figures, sites, and objects which speak to their personal lived experience. The old adage that the personal is political seems relevant here: in recovering and telling the overlooked stories of past women’s lives, and connecting them to the lived experience of present-day audiences, we perform feminist work.

There were also many valuable conversations surrounding how our methods could be improved. Questions were raised about the division of labour in public engagement: how to ensure that young (often female) early career researchers do not shoulder the heaviest research and administrative burdens, and that they are properly credited and remunerated if they do? Several panels spoke of incidents where heritage workers faced hostility online or in-person for spotlighting women’s histories, and of a wish for resilience and mental health training to be provided early-on in future schemes as a matter of course. Above all, the need to remain aware of the intersections between gender, race, and class was repeatedly voiced, as was the point that the best way to diversify research is to diversify who is carrying out that research. The centenary of the Equal Franchise Act in 2028 will provide a chance to put these lessons into practice – the conference ended with a positive feeling that, in nine years’ time, we will be able to build upon the foundations of this programme to orchestrate an even more ambitious series of national feminist narratives.

Kathleen Keown is an early career researcher and tutor in eighteenth-century literature. Her research focuses on women’s writing, sociable texts, and historical poetics. She recently completed her doctorate at the University of Oxford, with a thesis exploring the sociable dimensions of eighteenth-century women’s poetry. She tweets @kathleenkeown

Image: We are Bess at Hardwick Hall. All sixteen portraits hang amongst the Tudor portraits in the Long Gallery © National Trust - Gavin Repton, portraits by Rachel Adams, 2018 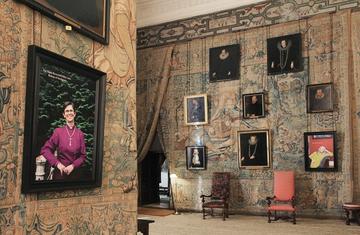