Between Khayal and O Sole Mio - A World Premiere 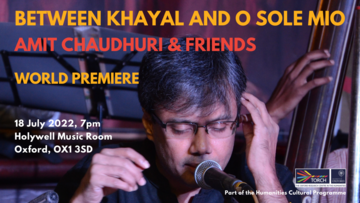 This event is part of the Innovation Provocation: Transnational Avant-Gardes Season

Between Khayal and O Sole Mio

**Weather warning: Due to the high temperatures expected during this event please be sure to bring plenty of water/refreshments as this may not be available at the venue.**

Amit Chaudhuri, one of the most highly regarded novelists writing today, has in the words of Hilary Mantel, 'perfected, like Proust, the art of the moment.'  He is also an acclaimed singer in the North Indian classical tradition: 'a truly wonderful singer, without any qualification such as "considering his distinction as a writer"' (Vikram Seth).  Rolling Stone India called him 'one of the most original composers in the country'.

Working between and across art forms, Chaudhuri has come to believe that the raga in North Indian classical music is primarily a reshaping of what Marcel Duchamp called 'found material'. That is, tunes and melodies aren't set to ragas; instead, ragas are a slowing down of, and minute investigation into, particular tunes and melodies, with their characteristic clusters of notes and progressions.

In this World Premiere performance Chaudhuri will conduct a playful transnational experiment: taking a well-worn melody from the Western classical tradition - the main uplifting section of 'O Sole Mio' - he will investigate its interrelationship of notes so as to transform it into a raga. The raga that will emerge is not set to the tune of 'O Sole Mio'; it will slow the tune down and explore the interrelationship of notes that are found hidden within it.

The performance will begin with a brief explanation of how the khayal in North Indian classical music is, as we know it today, a 20th-century modernist form. Accompanied by leading musicians, Nafees Irfan on the tabla and Ramesh Desai on the harmonium, Chaudhuri will then perform 'Khayal: O Sole Mio' in slow (vilambit) and fast (drut) compositions, before moving away from khayal with a few other pieces from the 'found music' repertoire in the jazz-blues-raga improvisatory idiom, with guitarist Adam Moore.