Book at Lunchtime: The Career and Communities of Zaynab Fawwaz 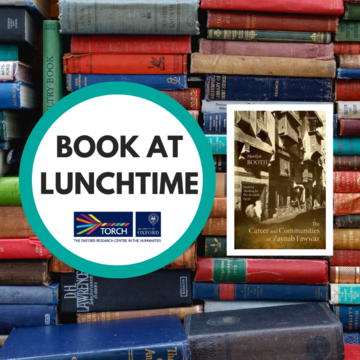 Register here to attend in person, or watch online.

Please note we strongly encourage in person attendees to take a Lateral Flow Test (LFT) before attending the event.

Join us for a TORCH Book at Lunchtime on The Career and Communities of Zaynab Fawwaz: Feminist Thinking in Fin-de-siècle Egypt by Professor Marilyn Booth (Oriental Studies).

Zaynab Fawwaz (d. 1914) emerged from an obscure childhood in the Shi'I community of Jabal 'Amil (now Lebanon) to become a recognized writer on women's and girls' aspirations and rights in 1890s Egypt. This book insists on the centrality of gender as a marker of social difference to the Arabic knowledge movement then, or Nahda. Fawwaz published essays and engaged in debates in the Egyptian and Ottoman-Arabic press, published two novels, and the first play known to have been composed in Arabic by a female writer. This book assesses her unusual life history and political engagements—including her work late in life as an informant for the Egyptian khedive.

A series of thematically focused chapters takes up her views on social justice, marriage, divorce and polygyny, the 'gender-nature' debate in the context of local understandings of Darwinism, education, and imperialism and Islamophobia, attending also to works by those to whom Fawwaz was responding. Her role in the first Arabic women's magazine, and her contributions to later women's magazines, are part of the story, too. Further chapters consider her uses of history in fiction to criticize patriarchal control of young women's lives, and her play as an intervention into reformist theatre, and the question of women's access to public culture in 1890s Egypt. Questions of desirable masculinities are central to all of these. Fawwaz was also known for her massive biographical dictionary of world women. In that work as in her essays, Fawwaz articulated an ethics of social belonging and sociality predicated on Islamic precepts of gender justice, and critical of the ways male intellectuals had used 'tradition' to silence women and deny their aspirations.

The lunch will consist of a range of vegetarian sandwiches, cakes and fruit. We advise guests to bring their own water. While we are unable to cater for specific dietary requirements, common allergens will be displayed alongside each item.

A hearing loop is available at the venue. For disabled parking, please contact office@oxfordquakers.org in advance of the event.