Book at Lunchtime: The Political Life of an Epidemic - Cholera, Crisis and Citizenship in Zimbabwe 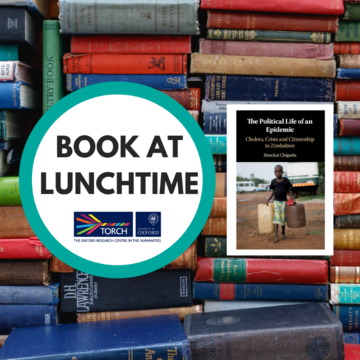 Join us for a TORCH Book at Lunchtime online webinar on The Political Life of An Epidemic: Cholera, Crisis and Citizenship in Zimbabwe by Professor Simukai Chigudu.

Watch a recording of the event below:

Zimbabwe's catastrophic cholera outbreak of 2008–9 saw an unprecedented number of people affected, with 100,000 cases and nearly 5,000 deaths. Cholera, however, was much more than a public health crisis: it represented the nadir of the country's deepening political and economic crisis of 2008. This study focuses on the political life of the cholera epidemic, tracing the historical origins of the outbreak, examining the social pattern of its unfolding and impact, analysing the institutional and communal responses to the disease, and marking the effects of its aftermath.

Across different social and institutional settings, competing interpretations and experiences of the cholera epidemic created charged social and political debates. In his examination of these debates which surrounded the breakdown of Zimbabwe's public health infrastructure and failing bureaucratic order, the scope and limitations of disaster relief, and the country's profound levels of livelihood poverty and social inequality, Simukai Chigudu reveals how this epidemic of a preventable disease had profound implications for political institutions and citizenship in Zimbabwe.

Professor Simukai Chigudu is an Associate Professor of African Politics at Oxford and a Fellow of St Antony's College. Prior to academia, he was a medical doctor in the National Health Service where he worked for three years. He is principally interested in the social politics of inequality in Africa, which he examines using disease, public health, violence, and social suffering as organising frameworks. He has conducted research in Zimbabwe, Uganda, The Gambia, Tanzania and South Africa.

Professor Sloan Mahone is an Associate Professor of the History of Medicine at Oxford University.  She specialises in the history of psychiatry and neurology in Africa as well as the history of medicine and psychiatry globally. Her current research projects, funded by the National Institute of Health Research (NIHR) and Oxford's James Martin School, involve the implementation of oral history programmes on epilepsy in Africa and in resource poor settings globally. She is a member of Oxford's Epilepsy Research Group.  Professor Mahone has also worked extensively in historical research and community development in Zaire (Democratic Republic of the Congo), South Africa, Botswana, Zimbabwe, Uganda, Tanzania, and Zanzibar.

Doctor Jon Schubert is a Leverhulme Trust Early Career Fellow at Brunel University. He is a political and economic anthropologist working on state institutions, infrastructures, and transnational trade in Angola and Mozambique. He is the author of ‘Working the System: A Political Ethnography of the New Angola’ and has previously held postdoctoral research positions at the universities of Leipzig and Geneva.