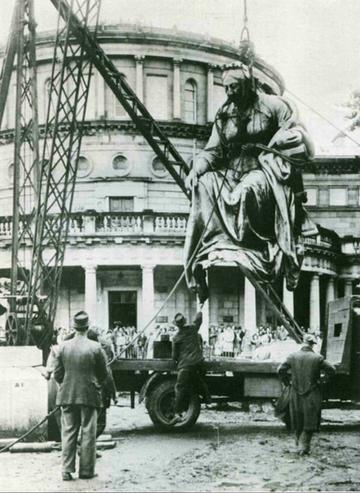 In the wake of the Black Lives Matter protests, renewed attention has turned to decolonising the curriculum, a wide-ranging initiative which means different things to different people and in different contexts. As statues toppled around the world, similar dialogues have been underway about decolonising the public sphere, interrogating the frequently racialised assumptions which have underpinned monuments and statues, particularly from the Victorian era of high imperialism. As illustrated by the recent controversy surrounding the removal of the Shelbourne statues in Dublin and ongoing debates about the John Mitchel statue in Newry, these are also live issues in Irish public life.

Irish history sits in a complicated position in relation to questions around decolonising the curriculum, with the nature and extent of British colonisation, shifting conceptions of 'whiteness', Irish emigrant experiences, and participation in the British imperial project all posing difficult questions to be untangled. On the one hand, Ireland experienced a long period of colonisation by England and later Britain - this process began, with varying degrees of brutality, in 1169 but accelerated rapidly during the Tudor Conquest of the 16th and 17th centuries. From this perspective, Ireland has frequently been called ‘Britain’s first colony’, and Irish people and Irish society were highly racialised by the British state. This has had lingering and serious consequences to this day - not least in attitudes towards the Irish language and Gaelic culture, and for the position of Northern Ireland within the United Kingdom. On the other hand, some parts of Irish society were heavily implicated in the expansion of the British Empire in the 17th and 18th centuries, with its attendant brutality and in some cases were involved in slave-trading. After the Act of Union in 1801, Ireland was formally part of the United Kingdom (although some colonial trappings were retained), Irish men served in both the British Army and colonial administrations, and Irish people continued to migrate in large numbers to the Anglophone world. As such, whether Irish history can represent a ‘decolonised curriculum’ is not a straightforward question. Commonly held assumptions and definitions around ‘whiteness’ do not neatly fit; as we know, in Irish history ‘white’ is a concept with a long and problematic history which reflects a wide spectrum of identities.

As the academy diversifies and decolonises, this is an opportune moment to examine the extent to which perspectives around decolonising the curriculum might bring new insight to the approaches, methodologies and sources that historians of Ireland and the Irish world adopt. This webinar will bring together a number of scholars grappling with the imperial and colonial legacies of Irish history, in dialogue with each other and with the audience, to consider the challenges, opportunities and sensitivities that a decolonising lens can bring to our work as historians.

Our panel will include:

The organisers gratefully acknowledge the support of TORCH (The Oxford Research Centre for the Humanities) and the Department of Foreign Affairs, Ireland