In Conversation with Lolita Chakrabarti 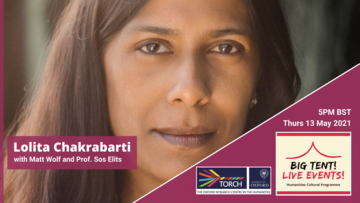 Part of the Humanities Cultural Programme, one of the founding stones for the
future  Stephen A. Schwarzman Centre for the Humanities

Join us for a fascinating evening with award-winning playwright and actress Lolita Chakrabarti in conversation with journalist Matt Wolf. Streamed live from an Oxford venue and chaired by Dr Sos Eltis, the event will cover Lolita’s wide-ranging career and hone in on her most recent play, Hymn, at the Almeida Theatre.

Lolita Chakrabarti is an award-winning playwright and actress. Writing credits include the award-winning stage adaptation of  Life of Pi, which will open in the West End in 2021, the ambitious Invisible Cities (MIF), Hymn (Almeida) and Red Velvet, which opened at the Tricycle Theatre before transferring to London’s West End and New York.  Acting credits include playing Queen Gertrude, opposite Tom Hiddleston, in Sir Kenneth Branagh's Hamlet (RADA), Fanny & Alexandra (Old Vic) and Free Outgoing (Royal Court).  A Casual Vacancy (BBC1/HBO), To Provide All People (BBC2), Beowulf (ITV), Jekyll and Hyde (ITV), Riviera (Sky), Criminal (Netflix) and Defending The Guilty (BBC).

Matt Wolf is an American theatre critic based in London, where he has spent his entire professional life. He moved to the UK directly upon graduating from Yale, where he read English and was co-arts editor of the Yale Daily News (a good place to begin). Soon upon arrival in London, he found work in a self-created job as arts and theatre writer for the Associated Press (AP), where he remained for 21 years.

Along the way, following brief stints at the Wall Street Journal/Europe and The Hollywood Reporter, Matt became London theatre critic for Variety from 1992-2005, during which time he was freelancing regularly for The International Herald Tribune – now the International New York Times. Following the departure from his long-held post of the august Sheridan Morley, Matt became London theatre critic for the IHT/INYT, and in 2009 was thrilled to help birth The Arts Desk – an arts-centred website that within a few years of its inception was named best specialism journalism website at the Online Media Awards in London. He remains theatre editor at that site and reviews there across the cultural spectrum.

In addition to his journalism, Matt has collaborated on two books – one about Guys and Dolls, the other about Les Miserables – and is the author of Sam Mendes at the Donmar: Stepping into Freedom, an account of the theatre and film director Sam Mendes’s extraordinary tenure at one of London’s premier theatrical addresses. Matt sits on the panel of the Evening Standard Theatre Awards and is on the faculty of both NYU/London and the V&A Museum; he can be heard regularly on various radio programmes for both the BBC and Monocle.

Following an acclaimed, sold-out live-streamed and on-demand runs, Lolita Chakrabarti's Hymn will be broadcast on Sky Arts on Sunday 18 April at 9pm. The world premiere of this production was directed by Blanche McIntyre and features actors Adrian Lester and Danny Sapani. Sky Arts is free to watch on Freeview Channel 11. Sky and NOW subscribers can also watch Hymn on-demand after the broadcast.

Lolita Chakrabarti is a HCP Visiting Fellow part of the Humanities Cultural Programme.