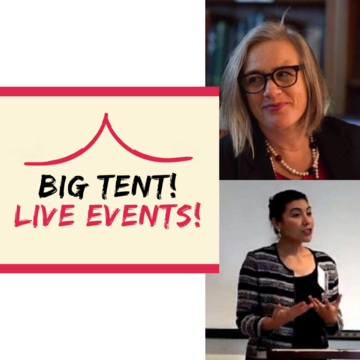 How have societies responded to pandemics, throughout the world, and throughout time? What are the new narratives, meanings and cultures that emerge and shape emerging realities? As this conversation will remind us, there is no simple answer to the problem of disease – but disease is also far more than a medical or scientific problem.  Robin Gorna will draw on her experiences with social movements and cultural responses to AIDS since the 1980s, which brought hope and massive social change in the midst of rage and death. She will discuss the many connections between the two pandemics - of cultural change, politics and people and emerging narratives, with reflections on her current experience of living with Covid-19 in her own body. Erica Charters will discuss a just-published special issue of Centaurus on ‘The history of epidemics in the time of COVID-19’, reflecting on how the discipline of the history of science and medicine has responded to the current pandemic.   Sharing historical approaches to understanding disease, she will explore how historians have framed pandemics and what a long-term context might offer for our understanding of COVID-19.

Dr Erica Charters (History Faculty and Wolfson College) examines the history of war, disease, and bodies, particularly in the British and French empires.  Her current research focuses on manpower during the eighteenth century, examining the history of bodies as well as the history of methods used to measure and enhance bodies, labour, and population as a whole, including the history of statistics. Since disease was the biggest threat to manpower in the early modern world, Erica looks at how disease environments – throughout the world – shaped military, commercial, and agricultural power, as well as how overseas experiences shaped European theories of medicine, biology, and race alongside political methodologies such as statistics and censuses.  Erica's monograph Disease, War, and the Imperial State: The Welfare of British Armed Forces during the Seven Years War (Chicago, 2014) traces how responses to disease shaped military strategy, medical theory, and the nature of British imperial authority (awarded the AAHM 2016 George Rosen Prize and the SAHR 2014 Best First Book).

Robin Gorna is an AIDS activist and feminist who has led global and local campaigns and organisations, including SheDecides (the global women’s rights movement that she co-founded 2017), the Partnership for Maternal, Newborn and Child Health (hosted by WHO), International AIDS Society, and Australian Federation of AIDS Organisations. She set up the global AIDS Team for DFID (Department for International Development) in 2003, and then moved to South Africa to lead the UK’s regional and national HIV and health programmes. She co-founded, and now chairs, the St John’s College Women’s Network. She studied Theology but spent far too much time involved in student drama until the end of her 2nd year when she saw an early performance of The Normal Heart (by Larry Kramer) and signed up as a volunteer with the UK’s new AIDS Charity, the Terrence Higgins Trust. She remains fascinated by the ways in which culture and the arts inspire social movements, including the global AIDS response. She publishes regularly and wrote one of the earliest books on women, Vamps, Virgins & Victims: how can women fight AIDS? She’s now working on a feminist memoir exploring a life lived between two pandemics. For more information, please visit Robin Gorna's website here: www.robingorna.com