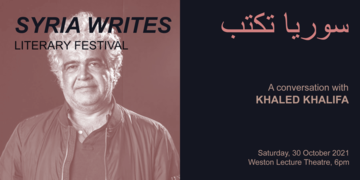 Khaled Khalifa was born in 1964, in a village close to Aleppo, Syria. He is the fifth child of a family of thirteen siblings. He obtained a Bachelor degree of law and currently lives in Damascus where he also writes scripts for cinema and television. Khalifa published 6 novels, three of which were vastly translated and earned international recognition. "Death is hard work”, translated into 12 languages, and published by Faber & Faber in the UK, was on the shortlist of the National Book Award (USA) in 2020. It was awarded the Saif Ghobash - Banipal award for translation that same year. His previous novel, "There are no knives in the kitchens of the city” was awarded the Naguib Mahfouz medal of literature in 2014, and was shortlisted to the International Prize of Arabic Fiction (or Arabic Man Booker), as well as his second novel “In praise of hatred”, which was also on the long list of the Independent Foreign Fiction Prize in 2013. He lives in Damascus, a city he has refused to abandon despite the danger posed by the ongoing Syrian civil war.

There will be a book signing and sale after this event.